U.S. Customs and Border Protection, along with government partners south of the border, are continuing their search for a 2-year-old girl whose mother says was lost in the Rio Grande river while attempting to cross near Del Rio, Texas.

“We don’t ever really stop searching,” he said. “Every day of the week we have agents patrolling. So there will come a time when less assets are put into the area to search, but we will still have agents out there and those agents will still be continuing to look as part of their regular duties. The search for missing people like this never really ends, but at some point it does evolve into a secondary mission.”

A woman from Haiti was detained late in the night on July 1 near Del Rio after she crossed the river from Mexico. She told agents she lost her 2-year-old daughter, a Brazilian national, while crossing the river. The agents partnered with law enforcement in Ciudad Acuña, Mexico and searched for the girl through the night. On Tuesday the agents on both sides of the border continued their search with a remotely operated submersible, a dive team, CBP Air and Marine Operations, and boats.

The missing girl is one of several who have fallen victim to the river in the Del Rio sector so far this fiscal year. Waikel tells TIME that 21 people have been found dead along the border since October, the majority of whom were found in the water. That statistic does not include bodies recovered by other agencies in the area. According to Waikel, 400 people have been rescued from the river since October 1 in the Del Rio sector. By comparison, there were 125 rescues in total in 2018, according to Waikel.

The search for the missing 2-year-old is underway just a little over a week after the bodies of a migrant father and his toddler daughter were found after drowning in the river near Matamoros, Mexico across from Brownsville, Texas, sparking international outcry. According to the Associated Press, the father attempted to cross the river with his family after being unable to schedule an appointment to claim asylum while at a U.S. consulate in Matamoros. The waiting list for asylum claims has started to grow under the U.S. “metering” policy that forces migrants to wait in Mexico.

A body of a man was also recovered from the river on June 25, according to CBP, and in April, three children and an adult from Honduras died after their raft capsized on the Rio Grande, according to the Associated Press.

The Rio Grande International Study Center (RGISC) tells TIME that the current river flow is normal, and does not believe the flow of the river at the moment would contribute to the increase in drownings.

The river by nature is dangerous, according to Tom Vaughan, a professor emeritus from Texas A&M International University and co-founder of RGISC. He tells TIME that he himself has found six bodies in the Rio Grande over his more than 25-year career.

“Somebody shows up, they’ve never seen the river before,” he tells TIME. “One misstep and now they’re caught in the current.”

Waikel says all 209 miles of the border covered by the Del Rio sector is river, and said many migrants may be deciding to cross through the sector because it is relatively safe from cartel violence. He added that overall, migrants typically arrive at various places along the border depending on smuggling routes and word of mouth.

On the night of July 1, Waikel noted that time of night, the fact that the mother couldn’t swim, a fast moving current, deep drops in the river bed, all contributed to the girl getting swept away by the river.

“It’s not necessarily the water level right now, it’s just the natural dangers of a river,” Waikel says. “It goes back to the fact that we are seeing family units crossing. In most places in the river an adult can walk across it—we’re talking ankle to hip deep—but in this case it’s a 2-year-old kid who’s walking across with her mother.”

The Coahuila law enforcement and Grupo Beta, a Mexican government search and rescue initiative, have helped with the efforts to find the missing child over the past few days.

“If there’s one shining light to a horrible situation it’s the cooperation that we’ve seen in this search with the Mexican government,” Waikel says. “This is a grim story. No one wants or likes seeing these things happen, but it is good to see that the Mexican officials are out there with us searching.” 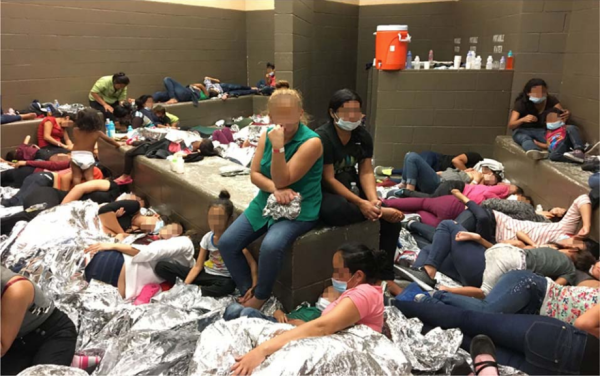