A PLA Navy fleet including the aircraft carrier Liaoning, submarines, vessels and fighter jets take part in a review in the South China Sea on April 12, 2018.
Contributor—VCG/Getty Images
By Brendan Scott / Bloomberg

China fired at least one missile into the sea over the weekend and was expected to continue testing through a launch window that continued until Wednesday, NBC News reported Tuesday, citing anonymous U.S. officials familiar with the matter. Pentagon spokesman Lieutenant Colonel Dave Eastburn said the tests near the Spratly Islands represented a “truly disturbing” violation of President Xi Jinping’s 2015 statement that China “does not intend to pursue militarization” in the water body.

“The PRC’s behavior is contrary to its claim to want to bring peace to the region and obviously actions like this are coercive acts meant to intimidate other SCS claimants,” Eastburn said in a statement Wednesday.

Chinese foreign ministry spokesman Geng Shuang referred questions about the incident to the military. The Ministry of National Defense didn’t immediately respond to a faxed request for comment.

The missiles could be used to target U.S. warships that occasionally assert free-navigation rights by sailing close to occupied Spratlys features, including a May 6 patrol by two destroyers. The U.S. rescinded China’s invitation to multinational military exercises last year after revealing the country had deployed missile batteries on reclaimed reefs.

The launch occurred while U.S. President Donald Trump was in the region for a series of summits including a meeting with Xi, in which the two leaders decided to resume trade talks. The economic dispute has helped surface a host of strategic differences between the two sides, including American complaints that China’s military moves pose a threat to navigation in the vital shipping lane.

China asserts control more than 80 percent of the South China Sea, overlapping with the claims of Brunei, Malaysia, the Philippines, Taiwan and Vietnam.

“We have no first hand knowledge about it,” Philippine Defense Secretary Delfin Lorenzana said in a text message Wednesday. “We will conduct our own inquiry and will decide later what to do if proven correct.” 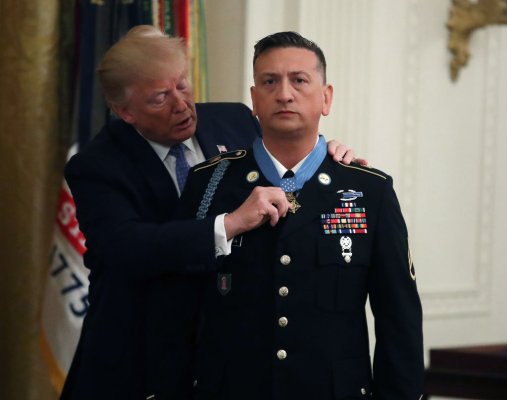 Army Staff Sgt. Becomes First Living Veteran to Receive the Medal of Honor for Iraq War
Next Up: Editor's Pick