The Timing of the World Cup USA Vs. England Match Is Making Fans a Little Extra Patriotic With the Memes

It may not have been intentional to schedule the USA vs. England 2019 World Cup semifinal match just two days before the 4th of July, which is celebrated as the U.S.’s Independence Day, marking the adoption of the Declaration of Independence in 1776 and the U.S.’s fight to secure autonomy from the colonial British powers. (Actually, it’s historically even more accurate for this match to take place on July 2: it was on this day that the Second Continental Congress approved the resolution that would become the Declaration. On July 4, the statement was finally printed for the public.)

So it makes sense that World Cup watchers and soccer fans (yes, soccer) can’t help but get excited about the auspicious match-up of old foes. Kicking off Tuesday evening at the Lyon Olympic Stadium in France, the U.S. women’s team quickly pulled ahead with a goal from Christen Press. That helped rile up supporters even further, sparking plenty of patriotic spirit just as the holiday weekend looms. Then the English team rapidly tied up the game thanks to player Ellen White, keeping things interesting in the first quarter. But the U.S.’s Alex Morgan found the net with another goal before the half ended.

This World Cup has shaped up to be a dramatic and popular summer sports spectacle, especially given the fight surrounding equal pay for the U.S. women’s team, who are in the midst of a lawsuit alleging they are currently paid less than their male counterparts. Star forward Megan Rapinoe, meanwhile, became the focus of President Donald Trump’s attention on Twitter after it became clear she was not interested in attending any White House meet-and-greets. She was not on Tuesday’s game’s starting lineup, although reports note the choice was not considered a “disciplinary” decision. Rapinoe’s replacement, Press, was the first to score on Tuesday. 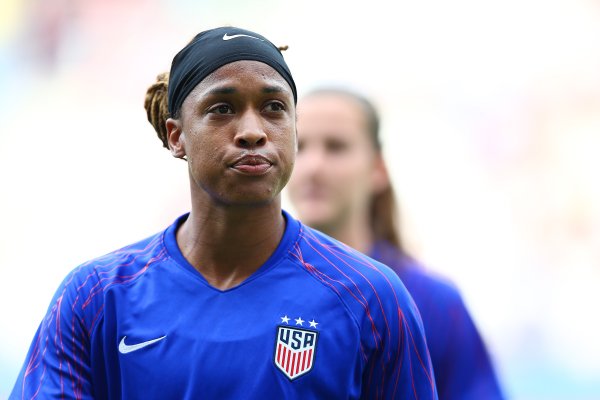 World Cup Soccer Player’s Enthusiastic Reunion with Her Son Deserves the Golden Ball for Reunion Videos
Next Up: Editor's Pick