By Abby Vesoulis and Tara Law

The second night of the first 2020 Democratic presidential debate was at times a fast-paced raucous affair, with candidates shouting over each other and struggling to be heard.

Here are some of their claims, fact-checked with additional context.

In May, President Donald Trump increased tariffs on $200 billion worth of Chinese goods to 25%, up from the previous 10% rate. South Bend, Ind. Mayor Pete Buttigieg criticized the hike by noting that the tariffs would translate into higher product prices for American families. “Tariffs are taxes, and Americans are going to pay on average $800 more per year because of these tariffs,” he said. “Meanwhile, China is investing so they can soon be able to run circles around us in artificial intelligence, and this President is fixated on this other relationship, as if all that mattered was the export balance on dishwashers. We’ve got a much bigger issue on our hands.”

The $800 figure Buttigieg was referencing originates from a February 2019 report by the economic consulting firm Trade Partnership Worldwide, which estimated American families would spend $767 more per year as a result of Trump’s 25% tariffs and China’s retaliatory levies.

Former geologist, brewpub owner and Colorado Gov. John Hickenlooper argued that he could accomplish progressive change in America, because he helped do so in his home state. “We expanded reproductive health to reduce teenage abortion by 64%, we were the first state to legalize marijuana and we transformed our justice system in the process.”

But Hickenlooper may have leaned a little heavily into the “we’s” in this statement. Colorado did see its teen birth rate fall 54%, and teen abortion decline by 64% over eight years, but many experts attributed it to a large grant Warren Buffett’s family gave to organizations supporting reproductive health.

Additionally, Colorado was one of the first states to legalize recreational marijuana use; however, Hickenlooper was originally opposed to the idea. “I was concerned about what it might do to teenage consumption; more people driving while high,” he told the Denver Post about his initial opinion.

Claim: ‘I did not oppose busing’

In one of the most dramatic moments of the debate, Harris confronted Biden for opposing forced busing in the 1970s as a policy to integrate American schools. Harris noted that, she herself was a “little girl in California who was part of the second class to integrate her public school.”

Biden countered that at the time, he would have agreed with her school’s decision to bus her, because it was decided by the local city council. “I did not oppose busing in America,” Biden said. “What I opposed is busing ordered by the Department of Education. That’s what I opposed.”

Biden introduced a 1976 proposal to stop the Department of Justice from using busing to desegregate schools. He supported a similar amendment in 1977 before introducing another bill that year opposing court-ordered busing. In a 1975 interview, Biden described busing as a “rejection of the whole movement of black pride.”

Sanders argued that the way to oust Trump was exposing him as a “phony” who failed to deliver on his promises to help poor and middle class families. “The American people understand that Trump is a phony,” Sanders said. “He said he was going to stand up for working families. Well, President Trump, you’re not standing up for working families when you try to throw 32 million people off their health care that they have and that 83% of your tax benefits go to the top 1%.”

According to an analysis by the non-partisan Tax Policy Center, the top 1% of income earners drew about 21% of the Trump’s tax benefits in 2018. In 2025, that percentage would increase to about 25%. In 2027, the top 1% would claim about 83% — but only because most of the individual income tax changes expire after 2025. 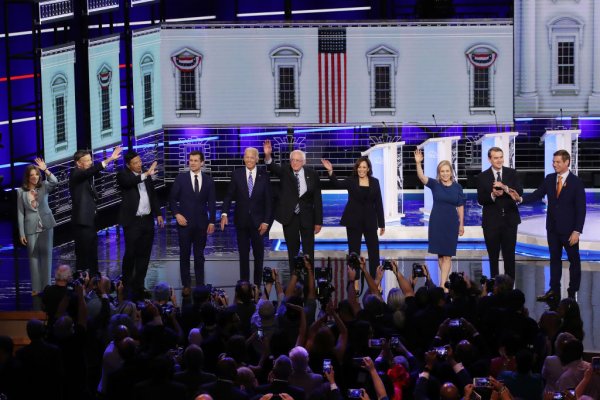