Everything We Know So Far About Royal Baby Archie's Christening

Prince Harry, Duke of Sussex and Meghan, Duchess of Sussex introduced their firstborn son, Archie Harrison Mountbatten-Windsor, to the world on May 8, just two days after his May 6 birth. But in the months following, Harry and Meghan have largely kept their new royal baby out of the spotlight — with the exception of a few Instagram posts, that is.

Royal baby Archie was christened on July 6. Of course, the baptism itself was a private affair. But royals fans will at least have a chance to catch a glimpse of Archie in photos from the day. If we’re lucky, we may even get our first shot of the full Cambridge and Sussex broods all in one place.

Check back for updates on the latest news on the event. And here’s what we know to know about royal baby Archie’s christening.

When was Archie Mountbatten-Windsor’s christening?

What happened at the event?

Prince Harry, Duke of Sussex and Meghan, Duchess of Sussex, pose with their newborn son Archie Harrison Mountbatten-Windsor during a photocall in St. George's Hall at Windsor Castle in Windsor, England on May 8, 2019.
WPA Pool—Getty Images

The Archbishop of Canterbury Justin Welby presided over the christening, during which royal baby Archie was officially baptized into the Church of England. The Archbishop used the Lily Font, a gilded silver bowl that has been used at the christening of every royal baby since 1841, to bless Archie with water from the River Jordan, where Jesus was believed to have been baptised by John the Baptist, and welcome him into the Anglican faith.

As with all royal christenings, the ceremony was a smaller, private affair, with no access to the public.

When will we see photos of royal baby Archie’s christening?

The Sussex duo shared the first photos from the christening on their Instagram page following the christening. “The Duke and Duchess of Sussex are so happy to share the joy of this day with members of the public who have been incredibly supportive since the birth of their son,” the Instagram caption said.

The second picture is an intimate black-and-white shot of Prince Harry and Meghan holding their baby.

What christening gown did Archie wear?

Catherine, Duchess of Cambridge carries Prince Louis as they arrive for his christening service at St James's Palace in London, England on July 09, 2018.
WPA Pool—Getty Images

Royal baby Archie wore the same traditional white satin-lined Honiton lace christening gown that has been worn by all of Queen Elizabeth II’s great-grandchildren — including Prince George of Cambridge, Princess Charlotte of Cambridge and Prince Louis of Cambridge. The gown is an exact replica of the dress that Queen Victoria commissioned for the royal baptism of her daughter Victoria in 1841.

The original gown was worn by 62 royal babies over the course of 163 years before being retired in 2004 following the christening of the Queen’s granddaughter Lady Louise Windsor. The Queen then tasked Angela Kelly, her personal wardrobe advisor, with replacing the gown.

In 2008, James, Viscount Severn — the queen’s youngest grandchild — became the first royal baby to wear the newer version of the gown. Subsequently, it’s been worn by each royal newborn at their respective christenings.

Princess Charlotte of Cambridge and Prince George of Cambridge hold hands with their father, Prince William, Duke of Cambridge, as Prince Louis of Cambridge is carried by his mother, Catherine, Duchess of Cambridge after his christening service at the Chapel Royal, St James's Palace, London on July 9, 2018.
Dominic Lipinski—Getty Images

Prince William, Duke of Cambridge and Catherine, Duchess of Cambridge both attended royal baby Archie’s christening, just as Harry and Meghan attended Prince Louis’ christening last July, but their children did not attend.

Before Meghan came along, Harry also made a solo appearance at Prince George’s christening in October 2013 (though he did miss Princess Charlotte’s in July 2015 because of a work trip to Namibia).

What about the Queen?

Queen Elizabeth was not present at royal baby Archie’s christening because she was absent on “other duties,” the palace said in a statement. But her absence isn’t out of the norm and shouldn’t be viewed as a snub to Harry and Meghan. While the Queen did attend Prince George and Princess Charlotte’s christenings, she missed Prince Louis’ last year as well.

What other notables were there?

Doria Ragland, Prince Charles, Prince of Wales and Camilla, Duchess of Cornwall after the wedding of Prince Harry, Duke of Sussex and Meghan, Duchess of Sussex at St George's Chapel at Windsor Castle in Windsor, England on May 19, 2018.
WPA Pool—Getty Images

Without the Queen there, Prince Charles, Prince of Wales and Camilla, Duchess of Cornwall were the highest-ranking royals in attendance at royal baby Archie’s christening. Other notables present included Meghan’s mother, Doria Ragland, as well as whoever Harry and Meghan choose to be Archie’s godparents. The photos shared on the Sussex Royal Instagram account showed that Princess Diana’s two sisters also attended their great-nephew’s special occasion.

As Archie’s aunt and uncle, Kate and William likely won’t be tapped as godparents since they’re already guaranteed to play an important role in their nephew’s life.

The close friends and family members who are speculated to be possible choices for the role of godparent include Serena Williams, Jessica and Ben Mulroney, Benita Litt, Princess Eugenie, Zara Tindall, Tom Inskip and Jake Warren.

Though Williams is a top choice to be Archie’s godparent, People reported that the tennis star wouldn’t be attending the christening. “I’m working on Saturday,” she told reporters at Wimbledon on Friday.

Despite public curiosity, the choices for Archie’s godparents will be kept private. In a statement Wednesday, the palace said that the christening at Windsor Castle on Saturday would be private and that “the godparents, in keeping with their wishes, will remain private.”

Write to Megan McCluskey at megan.mccluskey@time.com and Rachel E. Greenspan at rachel.greenspan@time.com. 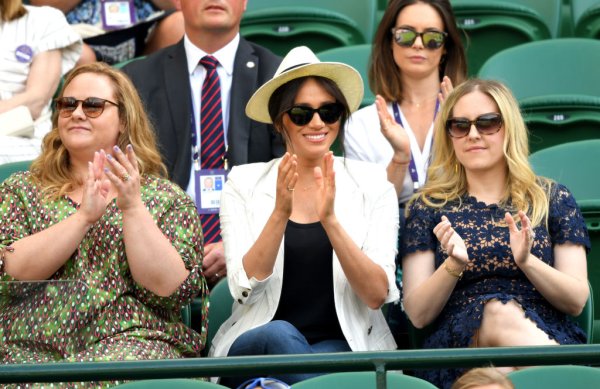