The documentary filmmaker tells TIME about her new movie, true crime’s pull toward darkness and lessons from her famous father.

I Love You, Now Die: The Commonwealth v. Michelle Carter, out July 9 on HBO, takes on the “texting suicide” case in which a teenager, Michelle Carter, was convicted of involuntary manslaughter for encouraging her boyfriend, Conrad Roy III, to kill himself. [Carter started serving a 15-month prison sentence in February.] Why did you want to tell this story?

I wanted to create an empathic portrait of two individuals who were struggling with mental health. It would have been easy to make a film that completely vilified Michelle Carter. But I tend to look for the humanity in crime cases. And it’s important to remember Conrad Roy. He gets lost in the story.

Michelle’s text-message exchanges with Conrad and others shape the narrative of the documentary. What emerged as you sifted through them?

That wolf-pack mentality of girlhood. Michelle was always the weakest. She was the oddball, always texting, always asking to be around other people. I worried I was additionally embarrassing Michelle by including this footage, but I hope it paints a portrait of how there was a reason why she felt unsafe.

You’ve now made four documentaries about true crime. You talk about “radical empathy” guiding your approach as a filmmaker. How do we practice that?

It starts with loving yourself. When you look at friendships, your professional life, strangers, think: How can I be helpful or additive in this situation? How can I make it not about myself? It’s asking people a lot of questions and being empathic about their responses.

In your new memoir, All That You Leave Behind, you write about a pull toward darkness. Where does that come from?

My dad [the late New York Times columnist David Carr] said, “You pick a beat, stick to it and get really good so you’re the person people reach out to for that subject.” I chose disturbing crime stories. It’s not been great for my psyche. But I like darkness, and I like providing a bit of light. And not to sound like a businessperson, but there’s an incredible audience for this.

Your dad was open about the dark moments in his life. What did he teach you?

He just wanted me to be really good at something. When I was visiting a prison to see the Cannibal Cop [the subject of her 2015 documentary Thought Crimes], who was convicted of conspiracy to kidnap and rape women, 99 of 100 fathers would be like, “You’re not doing this.” My dad was like, “Good job, honey.” He taught me we are not equal to our best or worst actions. He was somebody who had done fairly unconscionable things, but he had also done really good things. Life is an amalgamation of these moments. When I approach these stories, it’s about thinking of all the moments that have led to this.

You write about your own addiction and sobriety. How was it to excavate those uncomfortable moments?

I get frustrated when the only idea of alcoholics we have is the woman who loses everything–the job, the partner. When I stopped drinking, my friends were like, “Wait, you just like to drink.” No. You don’t know what it’s like to live with me. You should be allowed to be not drinking and not make a federal case out of it.

The book explores the resentments that emerged within your family after your father’s death. How has it been to navigate that?

It becomes a tendency for people in grief to isolate. You have to work against that. Holidays will always be difficult; I feel resentful that other families have no missing parents. But what I’ve realized is, I’m not alone. A lot of people go through this with grace and dignity, and I can be one of those people. 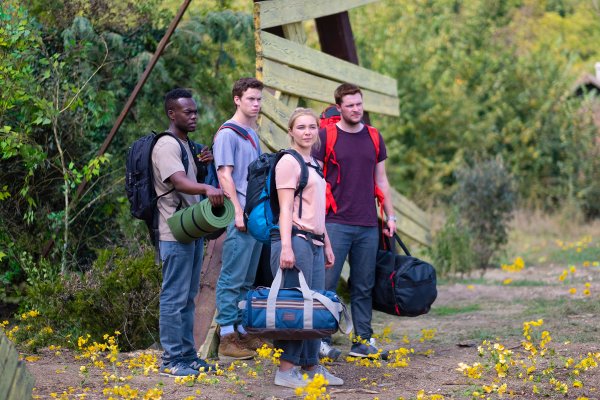 Midsommar Loses Its Plot Under a Sinister Midnight Sun
Next Up: Editor's Pick