Healthcare is likely to be one of the biggest issues of the 2020 election––and it was one of the first issues to divide candidates Wednesday night at the first Democratic presidential debate.

Warren’s hand sprang up. Like Sen. Bernie Sanders, she has made instituting “Medicare-for-All” an important part of her platform.

The New York mayor seemed to raise his hand a bit more slowly, but he doubled down on his support for the plan. A few moments later, O’Rourke started to comment that choice is important for health insurance but de Blasio cut him off, chastising him for failing to acknowledge problems with the existing health insurance system.

O’Rourke and the other candidates insisted that while they feel that all Americans should have access to healthcare, a government plan shouldn’t be Americans’ only option.

Struggling to speak over de Blasio, O’Rourke said that he feels that Americans should be able to keep their plan if it’s working for them.

“I think that choice is fundamental to our ability to get everyone cared for,” O’Rourke said.

Former Maryland Rep. John Delaney noted that someone like his father, an electrician who liked his healthcare plan, should not lose their plan. He also said that he was concerned that hospitals will be unable to afford to stay open if they are only paid by Medicaid instead of private insurers.

“We should be the party that keeps what’s working and fixes what’s broken,” Delaney said. “I mean, doesn’t that make sense? I mean, we should give everyone in this country healthcare as a basis human right for free. Full stop. But we should also give them the option to buy private insurance.”

Klobuchar also pointed out that many Americans are satisfied with their current health insurance.

“I am just simply concerned about kicking half of America off of their health insurance in four years,” Klobuchar said.

For Republicans, Warren and de Blasio’s comments may be seen as an opportunity to show that the Democratic Party is moving too far to the left.

Trump’s campaign manager for 2020, Brad Parscale, warned his followers in a tweet during the debate that they’re in danger of losing their healthcare if a Democrat is elected. 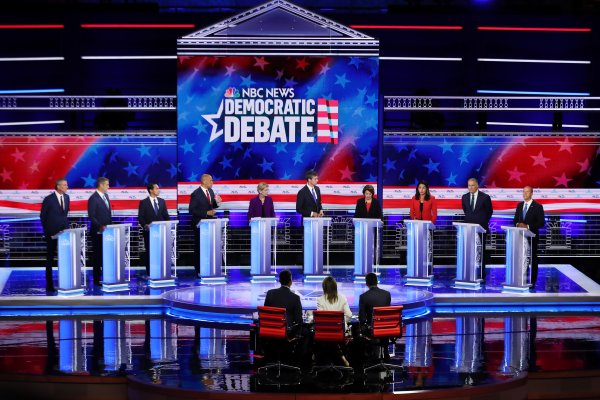 Here's Everything the Candidates Said at Wednesday's 2020 Democratic Presidential Debate
Next Up: Editor's Pick