Kamala Harris Has Been Waiting For Her Breakout Moment. Here’s Why It Could Come At the First 2020 Democratic Debate

The stakes are high for all of the Democrats in Thursday night’s debate, but perhaps no 2020 candidate has more riding on the outcome than California Sen. Kamala Harris.

Harris has failed to capitalize on a strong campaign launch in January that led many party insiders to label her a top contender for the party’s presidential nomination. She’s polling at around 7% in national surveys, settling into fourth place in most polls behind former Vice President Joe Biden, Vermont Sen. Bernie Sanders and Massachusetts Sen. Elizabeth Warren, while lesser-known competitors like Indiana Mayor Pete Buttigieg nip at her heels.

But there’s strong reason to think that the debate stage could be Harris’s breakout moment. A former California Attorney General and longtime prosecutor, Harris has demonstrated her litigating skills in the Senate, employing sharp lines of questioning toward high-profile figures like Supreme Court Justice Brett Kavanaugh and Attorney General William Barr. This skill has earned the grim admiration from her colleagues across the aisle, who placed her in the top tier of Democratic interrogators. “She was definitely more effective [than some of her other colleagues] at questioning,” recalls one former Senate Judiciary Committee aide. “Being a prosecutor and attorney general — it’s a mixture for a tough questioner.”

This time, Harris will be the one answering the questions rather than asking them. But Democratic insiders say her familiarity with the back-and-forth format, coupled with her strong debate performances in previous elections, could help her stand out among a crowded field.

“Debates are different than committee hearings,” says Jesse Ferguson, a Democratic strategist who worked for Hillary Clinton in the 2016 election but is not currently affiliated with any presidential campaign this cycle. “But if you’ve seen Senator Harris at a hearing or on the campaign trail, she has shown an ability to prosecute the case against Trump in a compelling way. In the debates she will have the largest audience she’s ever had in order to do that.”

Harris’ team knows that the debate stage will be the first introduction to the Senator for many voters. Harris has spent the past several days in Miami, huddled with a team of advisers and campaign staffers, preparing for Thursday night over takeout meals of Cuban and Caribbean take-out. Her campaign is eager to make the case that her experience as a prosecutor makes her the best candidate to press the case against the President.

Videos of Harris’ debates during prior campaigns reveal a candidate who speaks confidently and sharply, albeit sometimes running over the allotted time, and comes prepared to parry attacks.

In 2016, Harris faced off in a Senate debate against Democrat Loretta Sanchez, who attacked Harris’ record on crime. Harris was ready with a quick retort. “Lets also understand — the fear-mongering, the Willie Horton on the crime piece is not going to get it,” she said at the time, subsequently citing a local news report that said crime rates had “plummeted.”

But Harris has also demonstrated a skill that may serve her even more than debating acumen: an ability to break through the cacophony. Senate committee hearings are usually dry affairs, yet Harris has managed to parlay several exchanges into viral sensations while also yielding informative responses.

When she questioned Barr in May, he was unable to say whether or not President Donald Trump had suggested he open any sort of investigation, and that he had not read the underlying evidence of Special Counsel Robert Mueller’s report into Russian interference in the 2016 election. And she raised eyebrows during her exchange with Kavanaugh last September when she asked him if he had ever had a meeting about Mueller’s investigation with anyone at the law firm of President Trump’s personal attorney Marc Kasowitz. That firm pushed back against these allegations, and no information ever surfaced, but the line of questioning raised Harris’ profile. Both clips have subsequently been viewed millions of times.

If Harris can have a similar moment on Thursday, her allies think she will be in good shape. “Out of everyone, I think she is in the best position to shine and to come out of the debates with a bump in her poll numbers,” said Stefanie Brown-James, the co-founder of the Collective PAC, which recruits African American candidates, and is currently supporting both Harris and New Jersey Senator Cory Booker. “This is totally her moment to own.” 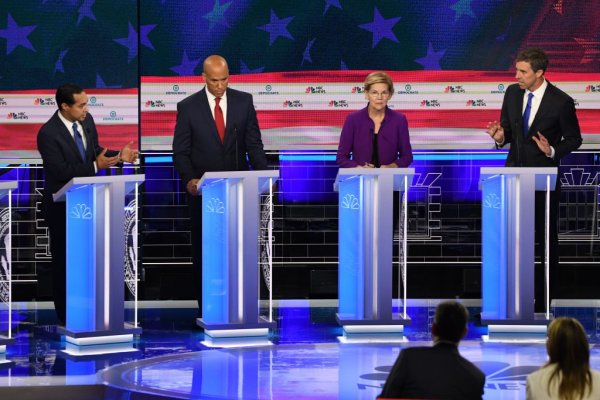 Why Democrats Debated Over Section 1325
Next Up: Editor's Pick