President Donald Trump awarded the Congressional Medal of Honor to former Staff Sgt. David G. Bellavia on Tuesday at a White House ceremony for his heroic actions during the Battle of Fallujah.

Bellavia is the only living serviceman to receive the nation’s highest military honor for actions in the Iraq War.

“David today we honor your extraordinary courage, we salute your selfless service and we thank you for carrying on the legacy of American valor that has always made our blessed nation the strongest and mightiest anywhere in the world,” Trump said at the ceremony.

It was his actions during Operation Phantom Fury in Fallujah that earned him the nomination. He and his squad were dispatched to search a block of 12 houses where multiple insurgents were reportedly hiding. The squad found nothing in the first nine houses but once they got to the 10th, they were ambushed. Two insurgents armed with machine guns were waiting for them.

President Donald Trump awards the Medal of Honor the U.S. Army Staff Sgt. David Bellavia Ret., during a ceremony in the East Room at the White House, on June 25, 2019 in Washington, DC. Staff Sgt. Bellavia is receiving the nation’s highest military honor for his heroism for rescuing his squad and clearing out a house full of Iraqi insurgents during the Second Battle of Fallujah in Iraq in 2004.
Mark Wilson—Getty Images

As some of his men suffered injuries, Bellavia provided suppressing fire, forcing the enemies to take cover. This allowed the soldiers to make their way out of the building.

“David knew they had to get out. He fired back at the enemy without even thinking. David took over,” Trump says during the ceremony.

After calling in a Bradley Fighting Vehicle to provide suppressing fire, Bellavia decided to go back in the building, where throughout the house, killed four insurgents and wounded a fifth. One of them was in hand-to-hand combat.

Michael Ware, who featured Bellavia in a 2004 TIME cover story on the fight for Fallujah, was present during the battle.

The ceremony Tuesday was held in front of some of members of Bellavia’s squad who he fought along-side 15 years ago.

“David often tells young people that Americans don’t want to fight but if someone picks a fight with us we will always win because we don’t fight for awards and recognition,” Trump said. “We fight for love of our country, our homeland, our family and our unit and that’s stronger than anything the enemy has.” 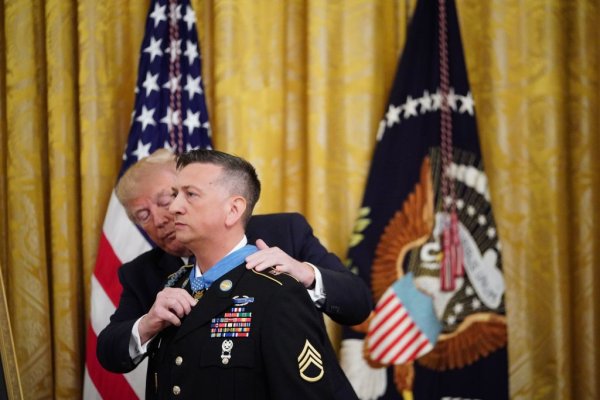 Medal of Honor Recipient Featured in a 2004 TIME Cover Story
Next Up: Editor's Pick