For the first time, a person of color will be the face of the nation’s largest LGBTQ lobby.

The Human Rights Campaign on Tuesday announced civil rights lawyer Alphonso David had been officially hired as its seventh president. The selection had been highly anticipated among LGBTQ advocates, and was viewed as a signal of where the lobbying and political powerhouse sees opportunity and peril in the coming years.

“If we want to win full equality, that’s going to require us to come together, to dig deep, to be resilient, to embrace our differences, to tenaciously defend the most vulnerable among us, to fight with every ounce of determination we have,” David said in a statement. “I promise you this, I will fight for each and every one of us.”

David, who steps into the role in August and identifies as a gay man, has been New York Governor Andrew Cuomo’s top lawyer since 2015. Before that, he was a lawyer with the state of New York, helping to earn the rights of same-sex couples to marry and ban so-called “conversion therapy” with minors. He pushed New York to use Medicaid funding to cover the costs of gender transition and to make it easier to change gender identity on government documents.

David, 48, follows Chad Griffin, an activist and former aide to President Bill Clinton who had led the deep-pocketed group since 2012 and last year announced he was planning to move on.

The shift comes at a major moment for LGBTQ rights. David is the first leader of the group to assume power in a country that has recognized same-sex marriage nationwide. Griffin had been a central player in the marriage-equality movement. The next fights for the Human Rights Campaign will be mundane — discrimination is still legal in credit scores, for instance — as well as momentous, such as the on-again-off-again rights of transgender Americans to serve the military in uniform. Those technical questions of law helped the Human Rights Campaign board decide David is their pick.

David will assume the role in an era of heightened consciousness of inequality within the LGBTQ community. The Human Rights Campaign has long been criticized as a bastion for white gay men of means who pay lip service to other corners of the movement. The selection of David signals that the board of the organization recognizes it has much work to do to make good on its pledge to advocate for all members of an often-disparate coalition at a moment when transgender individuals’ battles are gaining prominence, if not support.

The nascent presidential campaign will complicate the job too. The Human Rights Campaign is both a financial and political well from which candidates can draw. Some Democratic donors estimate support from the group and its members represent some 10% to 15% of the funds available to candidates. Last year, when Democrats won a majority of the House, an estimated 7 million LGBTQ voters cast ballots. That’s roughly 6% of the electorate, according to studies of LGBTQ voter behavior.

Add their friends and families, and it is a bloc that cannot be ignored. With an openly gay candidate — South Bend, Ind., Mayor Pete Buttigieg — in the race, the never-simple minefield of identity politics will be especially fraught in 2020. 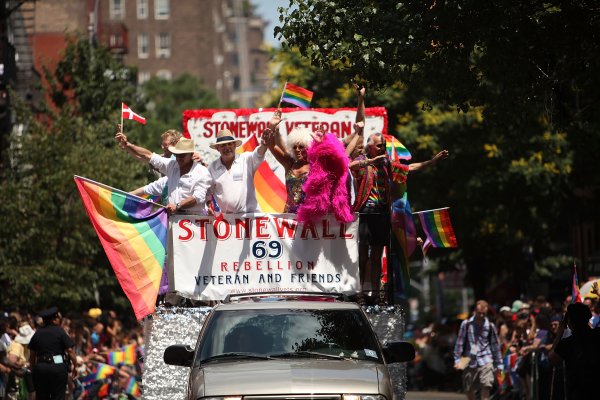 Was Stonewall a Riot, an Uprising or a Rebellion? Here's How the Description Has Changed—And Why It Matters
Next Up: Editor's Pick