Russian agents targeted 39 state election systems, sent spear-phishing emails to more than 120 election officials, and successfully infiltrated the websites or databases of seven states ahead of the 2016 election. Now, Elizabeth Warren has a plan to make sure that doesn’t happen again.

If elected President, the Massachusetts Democrat wants to replace every voting machine in the country with with state-of-the-art equipment, lock all federal voting technology behind a security firewall, and require states to adopt uniform election ballots to prevent common ballot mishaps like hanging chads.

Outdated technology is a root cause of America’s election security problem. More than 40 states use voter registration databases that are over a decade old, and 12 states still use voting machines that don’t leave a paper trail to confirm votes were counted correctly.

“Our elections should be as secure as Fort Knox. But instead, they’re less secure than your Amazon account,” Warren wrote in a Medium post published Tuesday morning. “State and local officials take their jobs seriously, but they often don’t have the resources to secure their elections.”

Her plan would mandate automatic same-day voter registration, early voting and vote-by mail. The progressive 2020 candidate would make Election Day a federal holiday and ban states from purging voters from the rolls unless there is “objective evidence” they died, moved or otherwise became ineligible to vote. In all states, people who completed prison sentences would be re-enfranchised.

In addition to these protocols, Warren would combat gerrymandering by requiring states to use independent redistricting commissions to draw their congressional districts.

Though following the election guidelines would be required in federal elections, the plan would also create a federal-state partnership that financially incentivizes states to meet the standards in state and local elections. The federal government would pay for a state’s election administration costs, as long as it met federal standards and proved it was making voting more convenient. Additionally, states that accomplish high voter turnout across racial, gender and age groups, would receive additional bonus payments.

Warren’s Medium post indicates the plan would allocate about $20 billion over 10 years to election administration and security. It would be funded by her ultra-millionaire tax: a 0.2% wealth tax levied on Americans with assets over $50 million.

“We have a solemn obligation to secure our elections from those who would try to undermine them,” Warren writes in the blog post. “That’s why the Constitution gives Congress the tools to regulate the administration of federal elections. It’s time to pick up those tools and use them.” 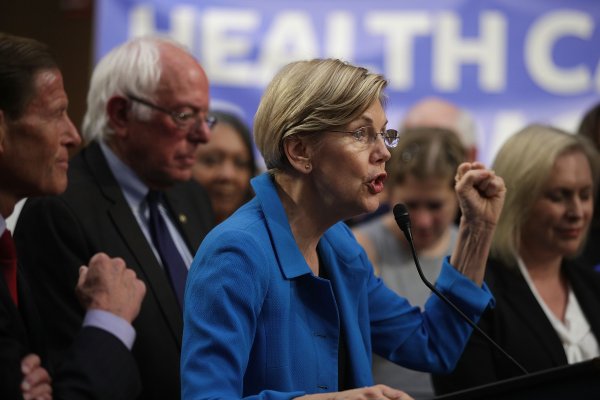 Sanders and Warren Face Looming Showdown
Next Up: Editor's Pick