Luis Alvarez, a retired New York City Police Detective and 9/11 first responder who testified before Congress on June 11, died at 2:15 a.m. on Saturday. Alvarez, who was 53, used his final days to speak up in support of reauthorizing the September 11 Victim’s Compensation Fund (VCF).

A little more than two weeks before his death, Alvarez – who was visibly very ill and thin – traveled to Congress and testified before the House Judiciary subcommittee, urging legislators to extend the fund.

“You made me come down here the day before my 69th round of chemo and I’m going to make sure that you never forget to take care of the 9/11 first responders,” he said. Comedian Jon Stewart testified shortly afterward, chastising Congress for taking years to make the program permanent and condemning the legislators who failed to show up to watch the first responders’ testimony.

“I will continue to fight until the Good Lord decides it’s time. I will try to do a few more interviews to keep a light on our fight for the VCF benefits we all justly deserve. Please take care of yourselves and each other.- God Bless-Lou,” Alvarez wrote on Facebook.

Alvarez’s family confirmed news of his death on Facebook Saturday through a lawyer.

“It is with peace and comfort, that the Alvarez family announce that Luis (Lou) Alvarez, our warrior, has gone home to our Good Lord in heaven today,” the statement said. “Please remember his words, ‘Please take care of yourselves and each other. We told him at the end that he had won this battle by the many lives he had touched by sharing his three-year battle. He was at peace with that, surrounded by family.”

About 16 years after 9/11, Alvarez, a former Marine and bomb-squad detective for NYPD, was diagnosed with colorectal cancer, an illness which has been linked to exposure to the attacks. In his last interview with Fox News, Alvarez urged 9/11 first responders to fight for VCF benefits even if they weren’t sick.

“To have all of this attention is a little strange, but I’ll do whatever I have to do to see my brothers and sisters who aren’t covered get the coverage that they need and the help they need,” Alvarez said. “There’s workers out there who say, this isn’t going to happen to me, I’m OK, the time has passed. The time is not gonna pass. There’s gonna be more and more and more responders getting sick… just because you’re not sick now doesn’t mean you’re not going to get sick.”

Alvarez told Fox News that he was comfortable and surrounded by family. “I’m at peace,” he said.

He was survived by his wife, Alaine Alvarez; his sons, David, Tyler and Benjamin; his parents, Felipe and Aida; his brothers Philip and Fernando; and his sister, Aida Lugo.

“Our NYPD family & all 1st responders mourn as we remember retired NYPD Bomb Squad Det. Luis Alvarez, who passed this morning,” O’Neill wrote. “His strength — physical, mental & emotional — led us all, & we vow to #NeverForget him or his legacy — which was, simply, to have others do what’s right.”

A day after Alvarez’s and Stewart’s impassioned testimony, the House Judiciary Committee voted unanimously to pass a bill restoring the VCF, which is set to expire in December 2020. In February 2019, the VCF office announced that $7.3 billion funding is running out and significant cuts would be made. The VCF has so far provided more than $5 billion to nearly 22,500 first responders, and estimates about $2 billion is left to process 21,000 claims that still need assessing. VCF would require an additional $4.6 billion, according to VCF Special Master Rupa Bhattacharyya, who also testified on June 11, in order to fund claims through December 2020.

John Feal, founder of the Feal Good Foundation and an advocate for the 9/11 community, wrote on Facebook that he was sorry that he had “failed” Alvarez for not passing the bill before Alvarez’s death.

“My dear friend when I am done feeling sorry for myself and mourn your loss, I will pick up my sword and take the fight to the ignorant and we will honor your name, your sacrifice and your legacy,” Feal wrote.

Most Popular on TIME
1
Trump Bypasses Congress By Appointing Pentagon Nominee
2
How Sleep Can Affect Your Relationship, According to Science
3
Donald Trump Needs Florida. Does Florida Still Want Trump? 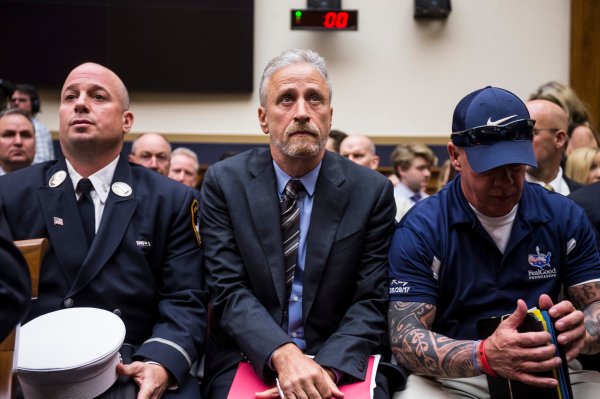