President Donald Trump said the U.S. will impose major new sanctions on Iran Monday, days after he abruptly called off a plan for airstrikes against the Islamic Republic after Iran shot down a U.S. Navy drone.

The sanctions move, announced on Twitter with no additional detail, came as Trump spent the day at the Camp David presidential retreat having meetings and phone calls. The president foreshadowed the sanctions action earlier, in remarks at the White House.

Trump told reporters he intended to impose additional economic sanctions and that military action is “always on the table until we get this solved.” If Iran’s leadership “behaves badly, it’s going to be a very bad day for them,” he said.

He also said that having the Strait of Hormuz open to shipping is less important to the U.S., due to its own large oil production, than to China, Japan, Indonesia and other countries.

“We’ll see with Iran,” he said. “Everyone was saying I’m a warmonger and now they’re saying I’m a dove.” Instead, Trump offered, he is “a man with common sense.”

‘Plane in Their Sights’

“I don’t want to kill 150 Iranians” unless it’s absolutely necessary, said Trump, expressing a fondness for Iranian people he’s known in New York. “Anything’s a lot when they shoot down an unmanned drone,” in terms of casualties.

Trump also said that Iran “had a plane in their sights, 38 people on the plane and they didn’t shoot it down. That was a very wise decision.”

That appeared to confirm a comment Friday by an Iranian Revolutionary Guard general that a manned U.S. spy plane was flying near the drone on Thursday but that Iran chose not to target it. The U.S. military’s Central Command hadn’t previously commented on the possible manned plane.

Trump praised General Joseph Dunford, who’s set to retire in October as Chairman of the Joint Chiefs of Staff. Dunford was against a military strike at this point, said Trump, who called him “a terrific man and a terrific general.”

Regarding some of his more hawkish advisers, including National Security Adviser John Bolton, Trump said that having people on both sides of the debate is important, but “the only one that matters is me.”

Echoing the types of comments he’s made about North Korea, Trump said he hoped he could “make Iran great again” over time. “Iran right now is an economic mess,” he said.

The cyber strikes against Iran’s Islamic Revolutionary Guard Corps were carried out by U.S. Cyber Command in coordination with U.S. Central Command, the newspaper said.

Iranian Foreign Minister Javad Zarif on Saturday sent a series of tweets with maps designed to show that the drone downed by Iran had been flying over its territorial waters, not international waters as the U.S. has said.

That “hand-drawn map” isn’t credible, said Secretary of State Michael Pompeo, redoubling the U.S. rhetorical hard line after Trump backed away from military action. “Iran’s leaders know the truth is a dangerous thing. It is important to correct the record,” he said Saturday in a statement.

Bolton, Trump’s national security adviser, said in Jerusalem on the eve a summit on regional security with Russian and Israeli officials that Iran has stepped up its aggressive efforts in the Middle East and is pursuing nuclear weapons rather than peace.

“The signs show Iran is not seeking peace,” Bolton said on Sunday, addressing media alongside Israeli Prime Minister Benjamin Netanyahu. “It’s forbidden for Iran to have a nuclear weapon.”

Iran, which has denied that it’s seeking to develop an atomic weapon, has shown little sign of backing down. It will take “new steps” if Europe doesn’t meet a deadline in two weeks for measures that ensure Iran can reap the economic benefits of the 2015 nuclear deal reached with world powers, the semi-official Iranian Students’ News Agency reported, citing Kamal Kharazi, a senior foreign-policy aide.

Kharazi, chairman of the Strategic Foreign Relations Council, which is part of the Foreign Ministry and advises the government, said he met U.K. Foreign Office Minister Andrew Murrison in Tehran.

With rifts growing across the region, the United Arab Emirates tried to appeal for de-escalation.

“Tensions in the Gulf can only be addressed politically,” the U.A.E.’s minister of state for foreign affairs, Anwar Gargash, said on Twitter on Sunday. 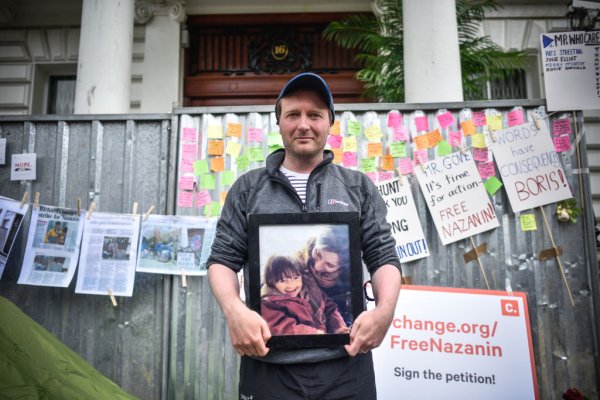 A British-Iranian Woman and Her Husband Are On Hunger Strike Over Her Imprisonment in Iran
Next Up: Editor's Pick