Immigrants are pictured behind the fences of a temporary facility set up to hold them at the El Paso Border Patrol Station, on June 21, 2019.
Paul Ratje—AFP/Getty Images
By Alex Wayne / Bloomberg

President Donald Trump dismissed the plight of migrant children housed in U.S. detention centers and falsely claimed that his predecessor enacted a policy to separate kids from their caregivers after they illegally cross the border.

Asked in an interview broadcast Sunday about recent reports that migrant children have been held in Customs and Border Protection detention centers for weeks without sufficient food, medical care or even basic hygiene supplies such as soap or toothpaste, Trump brushed off responsibility.

“This has been happening long before I got there,” Trump said in an interview with NBC’s “Meet the Press.” “You know, under President Obama you had separation. I was the one that ended it. Now I said one thing, when I ended it I said, ‘Here’s what’s going to happen. More families are going to come up.’ And that’s what’s happened.”

Trump’s interview coincided with a string of reports about children held in substandard condition in Border Patrol facilities, including a New Yorker article on Saturday that described flu and lice outbreaks going untreated, and children sleeping on cold floors. The hashtag #CloseTheCamps was trending Sunday on Twitter.

“They’re really coming up for the economics,” Trump said of the stream of migrants attempting to enter the U.S. “But I ended separation. I inherited separation from President Obama.”

That isn’t true. While President Barack Obama’s administration detained migrant children who entered the U.S. alone, it didn’t have a policy to separate children from caregivers when they crossed the border together.

That practice emerged in 2018, under Trump, after his then-Attorney General Jeff Sessions issued a policy known as “zero tolerance” that called for all migrants who crossed the border outside official ports of entry to be arrested and detained.

Trump ended family separations with an executive order in July 2018 after bipartisan outrage among the public and lawmakers, though there have been periodic reports that the practice continues less systematically.

The host of “Meet the Press,” Chuck Todd, said that Trump has made conditions in U.S. detention centers worse for children by scaling back recreation and education services.

“We’re doing a fantastic job, under the circumstances,” Trump said. “The Democrats aren’t even approving giving us money. Where is the money? You know what? The Democrats are holding up the humanitarian aid.

“If the Democrats would change the asylum laws and the loopholes, which they refuse to do because they think it’s good politics, everything would be solved immediately,” Trump said. 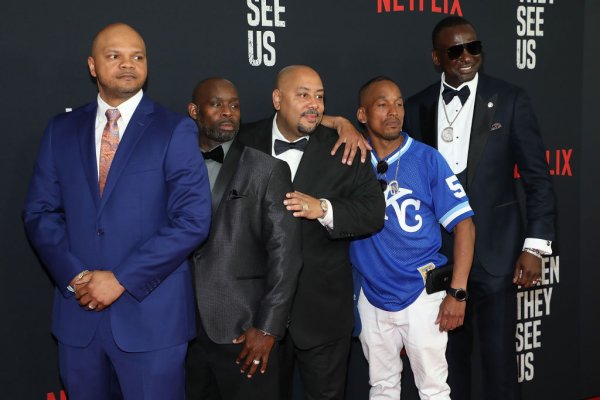 President Trump Refuses to Apologize for His Central Park Five Ad: 'They Admitted Their Guilt'
Next Up: Editor's Pick