This Medal of Honor Recipient Single-Handedly Cleared a House of Iraqi Insurgents. TIME Was There

Former Staff Sgt. David Bellavia fought back tears as President Donald Trump awarded the Congressional Medal of Honor to him in a ceremony at the White House on Tuesday.

Bellavia is the only living serviceman to receive the honor for fighting in the Iraq War. The ceremony was held at the White House in front of some of members of his squad that he fought with 15 years ago.

“David, today we honor your extraordinary courage, we salute your selfless service and we thank you for carrying on the legacy of American valor that has always made our blessed nation the strongest and mightiest anywhere in the world,” *Trump said.

TIME featured Bellavia in a cover story in November 2004 with a first-person account of Bellavia’s platoon being ambushed during operation Phantom Fury in Fallujah. The cover story was written by Michael “Mick” Ware, a war correspondent and documentary filmmaker, who was there with Bellavia during much of the action.

The Nov. 22, 2004 cover of TIME featured the battle for Fallujah in Iraq.
Photograph for TIME by Max Becherer--Polaris

Ware’s story was part of the testimony that was used in Bellavia’s Medal of Honor nomination. Ware also filmed most of the battle, which appeared in his 2015 documentary Only the Dead.

He will be at the ceremony Tuesday where President Donald Trump presents Bellavia with the Medal of Honor. Only five others have received the Medal of Honor for their actions in the Iraq War. All of them died as a result of their heroism.

“As ugly as it was, it’s been an extraordinary privilege to be the only eyewitness to David Bellavia’s incredible heroism,” Ware says.

The Battle of Fallujah in 2004 was one of the bloodiest fights of the Iraq War, with some 12,000 U.S. service members involved in the operation and 82 killed. The purpose was to take control of the city from the Iraqi insurgents who had seized it after ambushing and killing four American contractors. American, British and Iraqi forces were required to fight door-to-door to push the enemy out of the city.

Bellavia and his unit, part of the 2nd Infantry Regiment, were given the job of finding a group of insurgents who had escaped another American unit.

“David’s platoon was pulled out its ordinary operations and tasks to search one whole block of houses — 30 or 40 houses,” Ware recalls of the incident’s beginnings.

Ware’s TIME cover story explains circumstances surrounding the search: “The platoon has been ordered to hunt down and kill a group of insurgents hiding somewhere in a block of 12 darkened houses. It is 1:45 a.m., and the soldiers have been running from fire fight to fire fight for 48 hours straight with no sleep, fueled only by the modest pickings from their ration packs.”

While searching one of the houses, the U.S. soldiers were ambushed by two enemy fighters, who were hiding under a staircase with rocket-propelled grenades (RPGs) and machine guns. Ware and his platoon were forced out, with Bellavia providing cover fire so his troops could escape.

“They had been waiting for us. They turned it into a house of death,” Ware recalls.

The cover story describes the incident in detail:

As the rest of the unit stayed outside, Bellavia decided to go back in the house to clear it of the enemy fighters. Ware followed him.

WASHINGTON, DC - JUNE 25: U.S. President Donald Trump awards the Medal of Honor the U.S. Army Staff Sgt. David Bellavia Ret., during a ceremony in the East Room at the White House, on June 25, 2019 in Washington, DC. Staff Sgt. Bellavia is receiving the nation’s highest military honor for his heroism for rescuing his squad and clearing out a house full of Iraqi insurgents during the Second Battle of Fallujah in Iraq in 2004. (Photo by Mark Wilson/Getty Images)
Mark Wilson—Getty Images

Ware says he and Bellavia — who now resides in Buffalo, N.Y., where he works as a radio host for WBEN — formed a strong bond afterward.

“He called me the Ernie Pyle of the Iraqi War,” Ware said, referring to the Pulitzer Prize-winning war correspondent who covered World War II from the perspective of the everyday solder.

Ware says his role in this incident is a reminder of what can happen when there’s a strong relationship between the media and the government.

“This is an extraordinary union between the Pentagon and journalists,” Ware says. “Traditionally the military hates the press but this was one singular unique moment in a darkened house in Fallujah where the press and the military both speak for each other.”

The original version of this story misstated the identity of the U.S. serviceman pictured on the Nov. 22, 2004 cover of TIME. It is Marine Cpl. Eric Shelvy, not Army Staff Sgt. David Bellavia. 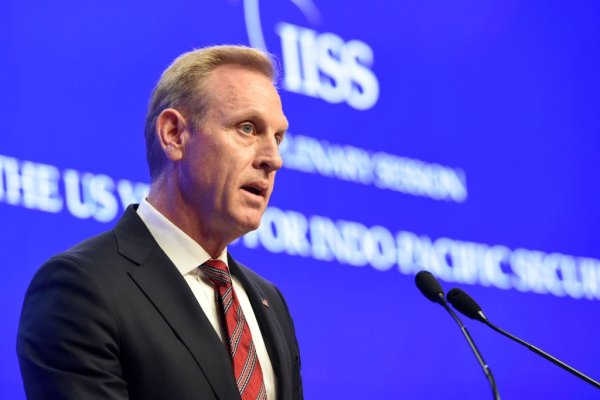