Toy Story 4 is getting rave reviews from critics. Sadly, it doesn’t begin with the traditional Pixar short that precedes most of the studios’ films. But fear not, there’s plenty of extra content at the end of the movie. The fourth installment in the beloved series boasts not one, but five post-credits scenes. So make sure to stay in your seat after Woody’s latest adventure wraps up.

The scenes bring closure to story arcs for some of the characters, but they also hint at possible sequels and spinoffs for the Toy Story franchise. Here’s what to know about all five post-credit scenes.

By the end of Toy Story 4, Woody (Tom Hanks) has decided to leave Bonnie’s home and live a free-wheeling life as a “lost toy” with Bo Peep (Annie Potts). In the first three post-credits scenes, Woody, Bo Peep and their newfound friends from the carnival, Ducky (Keegan Michael Key) and Bunny (Jordan Peele), make it their mission to find owners for the lonely toys who have languished on the back walls of impossible-to-win carnival games. They rig one of the shooting games so that every child who plays wins a toy. The teenage carnie who has been preoccupied with his phone the phone finally looks up at his booth to discover that all the toys are gone.

In the last scene, Ducky and Bunny fantasize about an extreme version of their “plush rush” plan of attacking humans, which they shared earlier in the film. In the imaginary sequence, they transform into giant monsters zapping humans with lasers in their eyes. Keanu Reeves’ Duke Caboom asks the toys whether they can really shoot laser beams, and they say yes. Reeves then utters his signature slogan, “Whoa.”

The series of scenes suggest that another Toy Story film focusing on the adventures of Woody, Bo Peep and the other lost toys could be in the works.

The fourth post-credits scene neatly parallels the beginning of the film. At the start of Toy Story 4, Bonnie created Forky out of art supplies salvaged from the trash on the first day of kindergarten. In the post-credits scene, we return to Bonnie’s room after she has returned home from the first day of first grade. Jessie emerges from Bonnie’s backpack and explains that Bonnie made yet another toy in school.

Out comes Knifey, another utensil brought to life as a toy, just like Forky. Forky is immediately starstruck and promises to answer all her questions. “Why am I alive?” Knifey asks, just like Forky did earlier in the film. Forky immediately falls short of his promise: “I don’t know,” he replies.

Could Forky and Knifey share a story in a future film?

After the full credits have rolled, the Pixar logo appears onscreen. But this time, Duke Caboom has replaced the lamp Luxo Jr. He rolls onscreen and over the “i” in Pixar. Combat Carl, still waiting for the high-five that his comrades and Woody denied him earlier in the movie, is there, still waiting for his greeting. Canada’s finest daredevil, thankfully, doesn’t leave him hanging, finally offering the snubbed soldier the high-five he deserves. 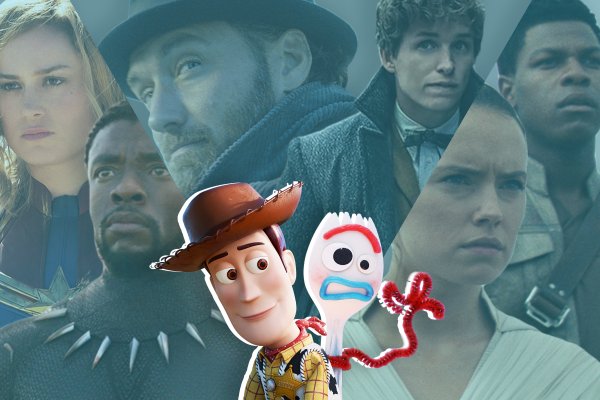 Why Toy Story 4 Is the Model of a Good Hollywood Sequel
Next Up: Editor's Pick