As former U.K. Foreign Secretary Boris Johnson appears increasingly likely to become Britain’s next Prime Minister, the husband of a British-Iranian charity worker who accuses Johnson of helping Iranian officials justify his wife’s controversial imprisonment is on his seventh day of a hunger strike outside the Iranian embassy in London.

“She’s utterly desperate,” says Richard Ratcliffe of his wife, Nazanin Zaghari-Ratcliffe, who he says is also on a hunger strike while in prison.

Nazanin Zaghari-Ratcliffe was imprisoned three years ago on charges of “membership of an illegal group,” though human rights activists have called the accusations made-up. Ratcliffe started his hunger strike on June 11, pitching a tent outside the Iranian embassy and consuming only water and tea. The couple decided to go on their joint hunger strike after their daughter Gabriella turned five, Ratcliffe tells TIME.

“It’s been over three years, we’ve pushed hard and now I’m sleeping on the pavement,” Richard Ratcliffe says while sitting in a camping chair outside the embassy. Next to him stands a framed photo of his wife and daughter. “We have to end this.”

Zaghari-Ratcliffe was arrested at Tehran’s Imam Khomeini Airport in April 2016 after visiting family in Iran with her then-infant daughter. She was sentenced to five years in prison in September of the same year. Amnesty International said she has committed no crime and is a “prisoner of conscience.” “It should never have come to this,” an Amnesty International statement said of the couple’s hunger strike.

Richard Ratcliffe has accused Johnson, the current frontrunner in the race to become Britain’s next prime minister, of making misleading statements that afforded cover to the Iranian government. Johnson, then Foreign Secretary, said in 2017 that Zaghari-Ratcliffe had been “teaching people journalism” in Iran. Three days later, Iranian officials cited his comments as proof that she was engaged in “propaganda against Tehran’s government.” Zaghari-Ratcliffe’s relatives and employer, the Thomson Reuters Foundation, say she was not working in Iran, but was on holiday to see family.

For his part, Johnson, said his comments didn’t “make any difference” to Zaghari-Ratcliffe’s sentence. “If you point the finger at the U.K., all you are doing is exculpating those who are truly responsible which is the Iranian Revolutionary Guard and that is reality and people should realize what this regime is up to, and that is where the responsibility lies,” Johnson said on June 18 during a BBC leadership debate.

Some experts disagree. “International attention on prisoners wrongfully jailed by repressive regimes is usually a good thing,” says Brian Dooley, senior advisor at Human Rights First. “But not when a senior government official blunders in unprepared, unthinking and unhelpful. This sort of careless talk can cost people their freedom.”

Iran’s ambassador to the U.K., Hamid Baeidinejad, has said that pro-Ratcliffe demonstrators were blocking the entrance to the embassy, which Richard Ratcliffe denies. Embassy officials have set up metal barriers next to him, onto which visitors have stuck post-it notes with messages of support, like “Free Nazanin now!” and “Hope your family can be united soon.”

Ratcliffe hasn’t seen his wife since her trip to Iran. The couple are allowed three calls a week, lasting a maximum of eight minutes each. “But it hasn’t always been like that,” says Ratcliffe. For the first eight and a half months of Zaghari-Ratcliffe’s detainment, she was kept in solitary confinement and denied access to a lawyer or any of her relatives. Gabriella, the couple’s daughter, now lives in Tehran with Zaghari-Ratcliffe’s parents. She’s able to visit her mother three times a week. But Richard Ratcliffe hasn’t been able to get an Iranian visa despite multiple applications. “I never get a response,” he says.

Ratcliffe says that when he spoke to his wife on Monday, she was “really stressed.” “Yesterday she sounded calmer, but said that the physical effects of not eating have started to set in,” he says.

High-level diplomatic attempts to secure Zaghari-Ratcliffe’s release have so far been futile. U.K. Foreign Secretary Jeremy Hunt granted her diplomatic protection in March, but Iranian officials refuse to recognize her dual nationality. On Saturday, Hunt tweeted a message of support, urging the Iranian government to “do the right thing, show the world your humanity & let this innocent woman home.”

“If this doesn’t help then I don’t know what,” says Ratcliffe. “I’ll strike for as long as she does.” 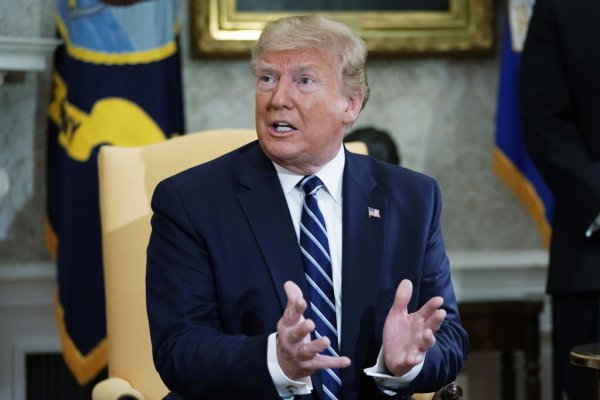 The U.S. and Iran Are Backing Down From a Fight
Next Up: Editor's Pick