'She Put Her Dreams Aside for Me.’ No. 1 NBA Draft Pick Zion Williamson Gets Emotional Talking About His Mother

NBA Prospect Zion Williamson is introduced before the start of the 2019 NBA Draft at the Barclays Center on June 20, 2019 in the Brooklyn borough of New York City.
Sarah Stier—Getty Images
By Melissa Locker

Basketball phenom Zion Williamson was the No. 1 pick at the NBA’s draft on Thursday night and while he was the star of the show, there was one person he wanted to put in the spotlight—his mom.

Williamson, who was selected by the New Orleans Pelicans, shook hands with NBA Commissioner Adam Silver and after flashing his new jersey, walked off stage for his first official ESPN interview as an NBA player. The 18-year old Duke star chatted with ESPN’s Maria Taylor and the interview quickly got emotional.

“You have been waiting for this moment since you were 5,” Taylor said. “How would you describe being the overall No. 1 pick in this draft?”

“I didn’t think I’d be in this position,” he said. “My mom sacrificed a lot for me. I wouldn’t be here without my mom, she did everything for me, I just want to thank her,” he said tearfully, as his mother Sharonda Sampson stood beside him looking proud. Taylor then reminded viewers at home that Sharonda had coached her son until he was 14, just four short years ago. Her son clearly appreciates her efforts, saying, “She put her dreams aside for mine. She always looked out for the family first before herself.”

The interview warmed a lot of hearts as people who watched it quickly took to the internet to share it. Seems that Zion has been an NBA player for less than one day and is already a hit with the fans: 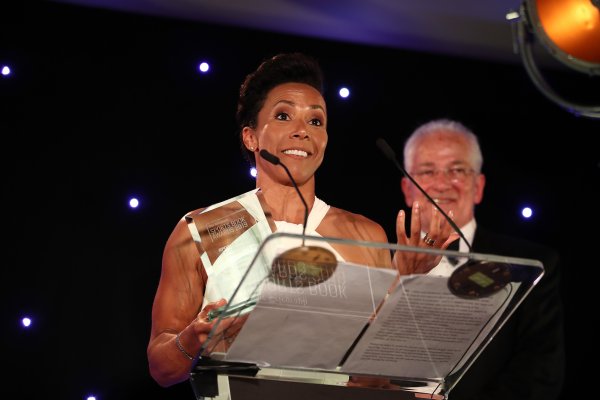 One-Woman Encouragement Machine Olympian Redefines Victory Lap By Running Backwards to High-Five Everyone in the Race
Next Up: Editor's Pick