Proposed tariffs on $300 billion in Chinese goods would include printed materials, which would especially affect Bibles and children’s books predominantly produced in China because of the unique paper, printing technology and skills needed, company and trade group officials testified during the second day of a seven-day hearing on the proposed duties Tuesday.

“We believe the administration was unaware of the potential negative impact these proposed tariffs would have on Bibles and that it never intended to impose ‘a Bible tax’ on consumers and religious organizations,” Mark Schoenwald, chief executive officer of HarperCollins Christian Publishing, told a panel of officials at the U.S. International Trade Commission.

A 25% tariff would make it difficult to continue printing some formats and raise prices, leading to a Bible shortage that would hurt the Christian bookseller market, as well as ministries, churches, nonprofits and other religious organizations that couldn’t afford them, Schoenwald said.

There also is no viable alternative to the U.S. children’s books printed in China because of the waterproof and nontoxic materials used in some cases, as well as China’s investment in recent decades in needed equipment, said Daniel Reynolds, CEO of Workman Publishing Co. in New York.

“If tariffs are imposed, there will be fewer books available to American kids,” he said.

Publishers try to use U.S. printers when possible, but capacity has become extremely constrained since the 1980s, said M. Luisa Simpson, vice president for global policy at the Association of American Publishers. Because of thin margins in the industry, higher prices would mean some books would be discontinued, publishers might have to scale back, and book stores, schools and libraries would be affected, she said.

“I know there’s a great interest in the area of religious freedom and access to religious goods on the part of the administration,’’ Jantz said in an interview after his testimony. “We do hope that there would be an openness and strong consideration for Bibles in particular and also for books.’ 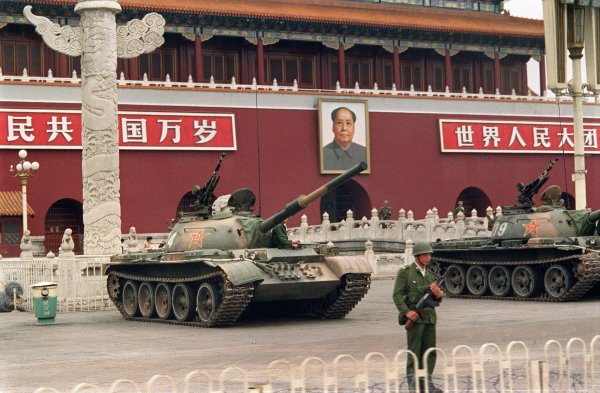 The Legacy of the Tiananmen Square Massacre in China
Next Up: Editor's Pick