Last week, Sen. Bernie Sanders stood on stage at a Washington, D.C., college campus extolling the virtues of democratic socialism in what his presidential bid billed as a major speech. As this week began, a group of roughly 200 top Democratic strategists met here in Charleston, S.C., to offer their rejoinder.

During a two-day strategy session about the 2020 elections, officials with the centrist think tank Third Way, activists, union leaders, members of Congress and representatives of some of the top Democratic presidential campaigns debated how to keep Sanders from defining the party and how to defeat President Donald Trump.

The debate comes amid a low-rumbling debate on the left about the meaning of “socialism.” Long a bogeyman of conservatives criticizing everything from Medicare to Obamacare, socialism has become less scary to younger voters who didn’t come of age during the Cold War and associate socialism more with northern European countries that provide strong safety nets.

A 2018 Gallup poll found that, among Americans aged 18 to 29, 51% had a positive feeling about socialism, compared to just 45% who felt the same way about capitalism.

But for the insiders gathered in Charleston, embracing socialism would mean turning off older independents, swing voters and rural and suburban Republicans dissatisfied with Trump who could prove crucial to winning the election. Already there are signs that Trump will use the label to rile up his base, arguing in his official campaign kickoff Tuesday that “a vote for any Democrat in 2020 is a vote for the rise of radical socialism and the destruction of the American Dream.”

Trump’s claim does not match the reality of the Democratic field, however. Of the 23 candidates for the Democratic nomination, only Sanders considers himself a socialist. His chief rival on the left, Sen. Elizabeth Warren, describes herself as a capitalist who wants to strengthen the market’s rules, while frontrunner Joe Biden has frequently argued in the past that the U.S. does not need socialism.

For some at the conference, branded as Opportunity 2020, that was comforting.

But she and others worried that social media platforms like Twitter — where democratic socialists often identify themselves with red rose emoji in their handles — were skewing the perspectives of campaign staffers. At the beginning of the gathering, Cowan stood before the entire group to caution against mistaking the conversation taking place in tweetstorms and Instagram videos from the ones happening around kitchen tables and at diners.

Citing Third Way polling, Cowan picked his iPhone off a glass-topped podium and noted that three-quarters of Democratic primary voters have never posted on Twitter; that one out of every 15 Democrats in the real world have attended a rally, compared to five out of 15 Democrats who are active tweeters; and that just 30% of Democrats consider themselves democratic socialists, compared to 54% among likely Democratic voters who tweet daily.

“We should all probably keep in mind a simple rule: If you are talking with your thumbs, you’re probably not talking to the people who make majorities,” Cowan said at the front of a Charleston Gaillard Center ballroom.

Third Way political chief Lanae Erickson said that temptation would be particularly strong in the coming months, since campaigns won’t yet be able to see what turns people out to vote, while it will be easy to measure which tweets do well.

“The general election is a million light years away,” she said. “It is going to be seven months before a single voter casts a ballot. … That is 229 days. It’s more 5,000 hours and way, way too many minutes to count. We have a long time before anyone casts a ballot, and that’s a problem.”

Psaki reiterated that advice. “Delete Twitter. Or don’t let it drive your day,” she said. “That is not reflective of the conversations happening in this country.”

Instead, leaders urged the presidential campaigns to get out of their comfort zones and talk to regular people.

Campaigns are rightly tempted to campaign efficiently, going where they can find the most votes with the least amount of time and money spent. But that builds resentment among those whom Trump calls the “forgotten men and women.”

“We have not really treated our rural Pennsylvanians the way they deserve to be treated,” said Nancy Patton Mills, chairwoman of the Pennsylvania Democratic Party.

“The way to win is by going to Main Street,” Tolleson, Ariz., Mayor Anna Tovar said during a separate conversation. “Then formulate your policies and ideas based on the needs that everyday community members think about. Listen to them and take action.”

They also urged candidates to ignore polls, which often are not representative this far out of an election. “None of them matter. Just stay focused on your vision,” said Jim Messina, who managed Obama’s 2012 successful re-election bid. “They’re all garbage,” he said of polls at this point.

Instead, strategists argued that Democrats should remain focused on how to replicate 2018’s midterm congressional successes in a coast-to-coast presidential race. African-American women, women overall and suburban voters, this cast argued, need to remain engaged as they were in the midterms. “Women are not a monolith,” said Cecile Richards, the former Planned Parenthood chief who now runs a pro-woman Supermajority.

Added Akunna Cook, the executive director of the Black Economic Alliance that co-sponsored the strategy session: “Ignoring black voter turnout is a recipe for disaster.” (According to Third Way’s research, there are more people of color voting in the suburbs than in urban areas these days, which explains the groups’ alliance.)

Among the other attendees, there remained a nervousness about how the election will go. “In my darkest moments, this race is going to be very, very, very close,” EMILY’s List President Stephanie Schriock said on Monday. A day later, Messina was equally worried: “I promise, we will be sitting on Election Day, not sure who is going to win.”

That led them to be very strategic in their thinking about who to choose as their nominee.

“Guess what? The President is not worried about this re-election campaign,” former Sen. Heidi Heitkamp of North Dakota, who is now running a group aimed at making inroads among rural voters to deny Trump a second term. “Functionally, he knows something that a lot of people in his universe know: if he makes this election about a choice, that bad guy …. versus Donald Trump, that he can win. He knows how to make binary choices a political mantra that eventually gets him where he wants to go.”

Trump has made clear that his binary choice will be between socialism and something else. For the attendees at Opportunity 2020, the choice in the Democratic primary will be much the same.

The original version of this story misstated the name of a city in Arizona. It is Tolleson, not Tollerson. 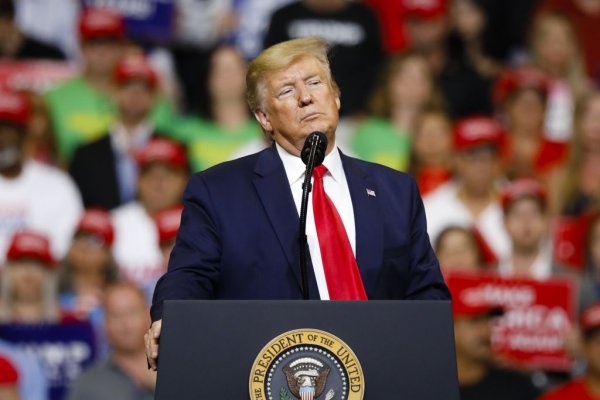