A man being hailed as a martyr of the Hong Kong freedom movement was mourned at an impassioned memorial Sunday, with protesters accusing the city’s top official Carrie Lam of being responsible for his death.

“We have to mourn the martyr—he is a martyr. Carrie Lam should apologize to the martyr,” said Daphne Tsoi, a 28-year-old teacher.

The vigil was held at the so-called Lennon Wall—a part the Legislative Council building that became a focal point during the 2014 Umbrella Revolution, when protesters plastered the wall with brightly colored messages of hope and liberty.

Thousands of mourners bowed solemnly before holding up their mobile phones to create a sea of light all the way up Harcourt Road, in the shadow of Hong Kong’s Central Government Offices and legislature.

The dead man, surnamed Leung, 35, plunged to his death the night before after unfurling a banner on scaffolding at the Pacific Place mall in the city’s Admiralty district—the site of violent clashes with the police on Wednesday that left more than 80 injured.

His banner called for the withdrawal of a controversial extradition bill that would allow fugitives to be sent to the mainland for the first time. Lam has argued that the bill is necessary to stop Hong Kong from becoming a haven for criminals. But critics fear that Beijing will use the extradition provision to apprehend dissidents and political opponents, posing a serious threat to semi-autonomous Hong Kong’s way of life.

Leung’s death has galvanized massive protests against the bill and dangerously raised the stakes in the struggle between Hong Kong’s democracy movement and the Beijing backed administration.

Hundreds of thousands of people from all walks of life marched through the city Sunday, shutting down major thoroughfares and calling for Lam’s ouster. Thousands formed long queues at the site of Leung’s death during the day, leaving floral and origami tributes and saying prayers.

One of thousands of messages left outside Pacific Place said “I hope that in heaven, you can see the Hong Kong you’ve fought so hard for.” Others read: “We are grateful for the sacrifice you’ve made for this city. You will see us Hong Kong people continue fighting till the very end” and “The road further ahead—we Hong Kong people will walk it on your behalf.”

“We have to sustain his fight. He was very brave,” said Stephanie Tsang, 23, who attended the vigil with her mother. “All the people must stick together to protect each other and protect Hong Kong.”

Seated next to the Lennon Wall holding a paper cup with a candle inside, Anson L., 20, said that Leung “sacrificed his life,” adding “We are all deeply affected by this tragedy.” 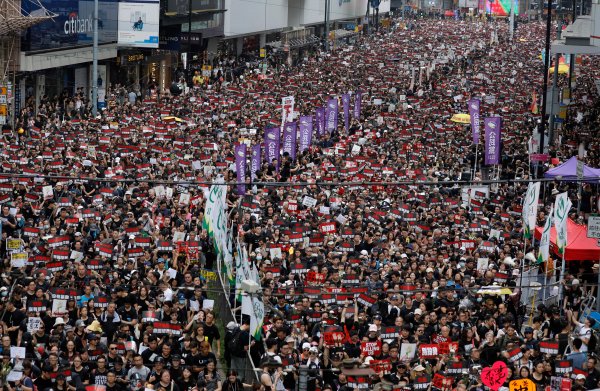 Hong Kong Rocked by Massive Protests
Next Up: Editor's Pick