'Don't Go to Target Today:' Target Registers Back Up After a Nationwide 2-Hour Outage

Target customers across the country tweeted that the big box retailer is experiencing a nationwide computer malfunction that has caused many of the stores’ registers to stop working on Saturday.

Patrons from Texas to New York to Florida tweeted photos and videos of dozens of customers waiting in line with red shopping carts filled with products, unable to check out seemingly due to computer issues. Many on social media claimed that Target employees say that the malfunction is chain-wide.

Target did not immediately respond to a request for comment, but the store’s official Twitter account confirmed that customers could not make purchases at the chain’s stores.

“We’re aware that guests are currently unable to make purchases at Target stores,” the tweet read. “Our teams are troubleshooting now and we apologize for the inconvenience. We will provide an update as soon as possible.”

Bentley Northup, who identified himself as an employee at a Target in Marshfield, Wisconsin, wrote TIME an email after getting off of his shift. He said that his store was affected at around 12:30 p.m. CST.

“Not only are registers down, (self checkouts are working – but very slowly), but so are our MyDevices, so we are unable to backstock products from the truck, or check stockroom quantities for guests,” Northup wrote.

He added that the store pick-up service was still working, so customers can purchase products that way.

Nancy Yang, a digital producer from MPR news in Minnesota, tweeted an image of an error message on a Target register.

Among the trapped customers is Katie Rosman, a reporter for the New York Times. Rosman tweeted that she spent an hour shopping for children’s camp supplies before the system shut down. She wrote that “allegedly” two of the self-check-out machines appeared to be working.

Hunter Sowards, a reporter for the Texas news channel KTRE, tweeted that Target employees were handing out chips, and the Starbucks employees were passing around refreshments.

One Twitter user, who identified herself as Rebecca Barkin, tweeted an image of a packed Target store.

Many users addressed their fellow customers, asking Target visitors to be kind to the employees who were trying to control the situation.

Later in the afternoon, multiple accounts from around the country started reporting that some stores’ services were functioning again.

Saturday night, Target released a statement saying that all cash registers are working again. The statement claimed that a review found that the issue was internal not a data breach.

“Target’s registers are fully back online and guests are able to purchase their merchandise again in all stores,” the statement read. “The temporary outage earlier today was the result of an internal technology issue that lasted for approximately two hours… After an initial but thorough review, we can confirm that this was not a data breach or security-related issue, and no guest information was compromised at any time.”

Target operates more than 1,800 stores in 49 states, which employ more than 300,000 people, according to the company’s corporate website. 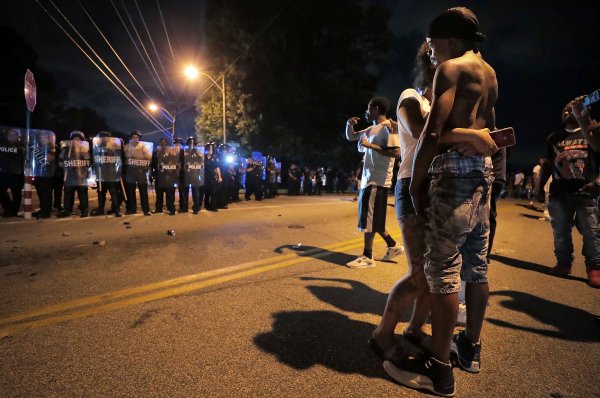