Wylie Dufresne is surprised by a retinue of famous foodies, including Padma Lakshmi.
Derrick Belcham/Matthieu Buchsenschutz
By Lisa Abend

Wylie Dufresne was taking a rare day off when, around 7 p.m. on April 8, he got the call every chef dreads. There had been an electrical outage on New York’s Lower East Side and because his restaurant WD-50 was closed that night, there was no one around to take care of all the raw fish and vegetables in the walk-ins that would soon begin to go bad. Racing to his restaurant, considered one of the finest examples of molecular gastronomy in the United States, he fretted: Would he be able to save the produce that packed his walk-refrigerators? Would he be able to afford to get the damn system fixed?

His anxiety was soon displaced by shock, when he walked into the pitch-black restaurant and found not ruined ingredients and burnt-out appliances but a video playing in the dining room—one that had his face superimposed onto a creepy David Lynch character who appeared to be talking to him. It was greater still when the lights came up and there, shouting “Surprise!” with all their hearts, was a dining room filled with 65 invited guests, and 29 of the world’s most acclaimed chefs.

“That is going to the best surprise party ever,” said René Redzepi, one of the participating chefs, as the minutes before Dufresne’s arrival ticked down. He turned out to be right: despite complicated logistics worthy of a minor military invasion and dozens sworn to secrecy, the guest of honor had absolutely no idea it was coming. But another, more profound surprise lay in store. For the 17 chefs who flew in on their own dime—Redzepi of Denmark’s Noma, Rodolfo Guzmán of Chile’s Boragó, Ana Ros of Slovenia’s Hisa Franko, Ben Shewry of Melbourne’s Attica, Blaine Wetzel of Washington State’s Willows Inn—as well as the local chefs like David Chang, Gabrielle Hamilton, and Daniel Boulud, the dinner was turned out to be that rarest of opportunities. One more in ever-evolving series of feasts known as Gelinaz, it turned out to be a precious chance to reconnect with the reasons that drew them to cooking in the first place.

As chefs have become more than just cooks—they are seen now as celebrities, as corporate businesspeople, as artists, even as public intellectuals—the demands upon them have increased. Most of them manage more than one restaurant, or at least regularly entertain offers from international investors eager to have them open one (or more) in Los Angeles or Beijing. They run labs and test kitchens designed to supply them with a never-ending source of new ideas. They churn out cookbooks tracing their trajectories, and publish Op-Eds denouncing misbegotten areas of food policy. To promote their restaurants, they maintain a steady presence on Twitter and Instagram, and star in serious-minded documentaries about their work. And they regularly travel the world, giving talks and participating in gatherings designed for them to share ideas with their peers. It’s a long way from the days when chefs simply had to please diners with delicious food and a well-run dining room.

Gelinaz dinners before (the name is partly inspired by the chef who, along with food writer and bon vivant Andrea Petrini, co-founded it, Fulvio Pierangelini), were never intended to be part of the chef rat race. In fact, they were designed for just the opposite: by bringing together a number of chefs to riff on a single, signature recipe, they would, it was hoped, spark creativity and friendships. At a gathering in June 2013 in Ghent, Belgium 23 chefs interpreted a 19th-century recipe for a chicken-and-aspic timbale; that fall they went to Lima to riff on an octopus dish by Gastón Acurio. A ticket to each cost around $700—a price that was intended to offset the cost of flying all these chefs in from around the world and paying for their ingredients.

Although most diners at those two Gelinazes were happy with the experience, the chefs were not. They found it limiting to focus on just one recipe didn’t like the pressure to perform that such an expensive price tag brings, and they were uncomfortable with the fact that, because the remaining costs were picked up by local sponsors, they had to spend chunks of their time together showing up at tourism or corporate events and talking to the press. The essential experience had been lost, and when a third meal was planned for New York, they staged a minor rebellion, and Petrini was forced to cancel the public Gelinaz he had planned for April.

But that’s when the chefs stepped in to change it. Instead of a single recipe, they would riff on three of them. They would avoid the obligations of perfection that paying guests imposed by making it by invitation only—two guests per chef. “It’s not right for guests to pay because we’re doing this in order to play,” said Pierangelini. “If we want to play, we should pay for our own toys.” They would cut back on the need for sponsors, and thus retain more control of their time, by paying for their plane tickets and the two Brooklyn apartments where they would all share rooms themselves (early plans to bar sponsors altogether failed when the chefs learned the cost of renting WD-50 for the night). And although they all admire Petrini, they would do all this not just because he asked, but for a purpose. They would do it to honor Wylie, a chef they adore for his talent and humility.

After Dufresne recovered from the shock (always prepared, chef Ana Ros, commented, “The two people I invited are doctors—just in case he has a heart attack.”), the dinner began with Dufresne’s own cooks preparing the standard versions of three signature WD-50 dishes: Cold Fried Chicken, Shrimp Noodles, and Scrambled Egg Ravioli. Those dishes may sound standard on paper, but they are anything but. Known for his highly imaginative, modernist approach to cooking, Dufresne serves the chicken, for example, with a cube of buttermilk ricotta and a sprinkling of caviar.

“That’s the challenge,” said Patterson referring to the task of reinventing Dufresne’s creative recipes, “how do you outmodern Wylie?” The first group of chefs to serve, including Chang, Noma’s Rosio Sánchez, and Empellón’s Alex Stupak, didn’t try: they put down crowd-pleasing buckets—with Dufresne’s face where the Colonel’s would go—of fried chicken and biscuits, accompanied by big tins of caviar. But succeeding courses were creative indeed: Redzepi and Ben Shewry eschewed the chunk of protein that the chicken dish requires for a fermented chicken broth, that the served with hand-ground grits, their corn flavor heightened with fermented corn juice. In Patterson’s group, which included Alex Atala, Claude Bosi, Gabrielle Hamilton, and Kondo Takahiko, each contributed a single ravioli—same casing, different filling—to a dish meant to represent the ways that immigrants influence host cultures. And in one of the star dishes of the evening , Sweden’s Magnus Nilsson, and France’s Agata Felluga, served a small heap of noodles swirled with baby scallion and topped with an intense shrimp paste atop a frankly gorgeous ice plate.

But all the excitement in the dining room didn’t match the energy in the kitchen. The out-of-town chefs had arrived on Sunday night. Holed up in two Brooklyn apartments, they ate their dinners in private to avoid be recognized in public, and did their early prep work at restaurants—their staff sworn to secrecy—scattered throughout the city. By the time the chefs convened at Wd-50’s kitchen early Monday afternoon, the buzz was palpable. Negotiating for limited counter space, and working from complex charts that determined which team could have which stovetop during what exact period of time., they began their real collaboration.

Redzepi and Shewry’s had spent the entire day before trying to perfect their dish and still weren’t happy with it. “We want it to be good not just for the diners but because we’re doing it for Wylie,” Redzepi said as he tossed out the umpteenth iteration of the dish. Patterson stepped into help things along by squeezing a shot of Srichacha into the broth. Wetzel and Martínez couldn’t figure out the proper plating for their dish until someone suggested the serve the clams on a separate piece of slate. Those who weren’t busy stepped into the plate the dishes of those who were, and the kitchen became so crowded with chefs that the waiters, bearing precarious trays of used glassware, had to fight their way through to the dishwasher. Observing it all, Shewry could only marvel. “Imagine if someone did all this for you,” he said. “It would be the highlight of your career.”

As the pace began to pick up, Dave Chang stepped into expedite, then later turned over the reins to Daniel Boulud, who ran the pass with an efficiency—a steady stream of instructions punctuated with a French-accented go go go—that awed the others. They marveled again as the four-starred Boulud, working with his existential opposite, Danny Bowien of Mission Chinese, plated their dish, the evening’s final: an exquisite mashup of French and Chinese that paired a creamy shrimp sabayon that looked like a breakfast bun with a demitasse of soup based on XO sauce into which the diner was expected to blow two straws whose content contained shrimp “noodle.” “It’s like a very nice uptown French restaurant came downtown and got beat up by a Chinese restaurant,” Boulud said as he presented the dish.

When it was all over sometime toward midnight, Wylie sat on the pass in the kitchen, and though overwhelmed with emotion, managed to get out a few words of thanks to his friends and colleagues. Applauding raucously, Redzepi turned to Shewry. “It’s so easy to forget, but this is why we do it,” he said. “How lucky are we that we get to make a person happy?”

Watch: The Chefs Talk Prep and Cooking Ahead of the Surprise 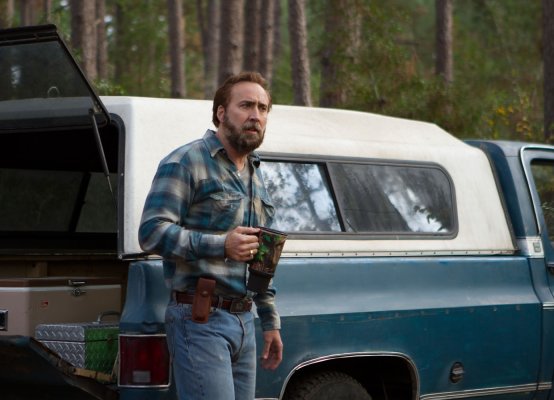 REVIEW: 'Joe' Reminds Us That Nicolas Cage Is a National Treasure
Next Up: Editor's Pick