The Toronto Raptors celebrate winning the NBA Championship after defeating the Golden State Warriors in Game Six of the NBA Finals at Oracle Arena in Oakland, Calif. on June 13, 2019.
Jack Arent—NBAE/Getty Images
By Sean Gregory / Oakland

Canadians descended upon Oracle Arena in Oakland on Thursday night, hoping to see the Toronto Raptors win their first NBA title, and the first “big four” (NBA, MLB, NFL, NHL) North American pro sports championship for Canada since the Toronto Blue Jays secured their second straight World Series title way back in 1993 (the Montreal Canadiens won the Stanley Cup that same year; incredibly, no Canadian NHL team has won the Cup since). The Raptors’ supporters arrived from every province, it seemed, in Northern California, many wearing the garish purple jerseys — featuring an oversized red dribbling dinosaur — that the franchise sported in its inaugural years, when Toronto lost lots of basketball games.

When Game 6 was over and Toronto pulled out a 114-110 victory to win a third straight Finals game on the road — and clinch the series — Canadian fans refused to leave Oracle.

This was the last game in Oakland for the Warriors, winners of three of the past five NBA titles, before they move across the bay to San Francisco next season. But the Raptors’ fans had taken over the arena. Delirious, they filled dozens of rows in the aftermath of Toronto’s win, serenading NBA Finals MVP Kawhi Leonard, underappreciated All-Star Kyle Lowry, emerging superstar Pascal Siakam — who finished Game 6 with 26 points, on 10-17 shooting — and reserve guard Fred VanVleet, the overlooked, undrafted, none-too-athletic 6-footer who ripped the hearts out of the Warriors faithful with a dozen fourth quarter points. VanFleet outplayed Stephen Curry down the stretch.

Even as the team chugged from champagne bottles in the locker room, leaving them strewn all over the floor, fans lingered outside. “It feels so good to shut this place down,” says Ankura Tayal, 36, a chiropractor from Victoria, British Columbia. “Respectfully.”

Entering these NBA playoffs, Toronto hadn’t earned too much respect from many hoops pundits, despite finishing regular season with the second-best record in the league. Five straight playoff exits will earn you plenty of doubters. Milwaukee, with MVP candidate Giannis “The Greek Freak” Antetokounmpo, Philadelphia, and even Boston — a talented team that could never quite rally around Kyrie Irving — were trendier picks to win the Eastern conference. But Toronto? Sure, the Raptors had Leonard, the league’s most unassuming, keep-to-himself superstar. But Toronto didn’t feature any flashy lottery picks. VanFleet, for one, was undrafted out of Wichita State. “It’s not the glam stars,” says Van Fleet. “None of our guys probably, other than Kawhi, are in that big boy fan club or the fan boy club of the NBA.”

Sure, the Raptors benefitted from Golden State’s surreal rash of injuries. Kevin Durant ruptured his Achilles after playing just 12 minutes in Game 5, his only appearance of the Finals. Klay Thompson was torching Toronto in Game 6 — he had 30 points in third quarter when Toronto’s Danny Green fouled him on a dunk attempt. Thompson landed awkwardly on his knee, but told his coach, Steve Kerr, that he’d need just a two minute rest. Thompson tore his ACL. Both Durant and Thompson are free agents coming up this summer, but could both miss significant portions of next season recovering from their ailments, muddling the plans of both Golden State and the teams that planned on pursuing Durant. (Thompson will almost certainly re-sign with the Warriors.)

Even though Golden State lost a lot of firepower these finals, the Raptors earned the title. Toronto withstood inspired performances from Golden State veterans like Andre Iguodala and Draymond Green: Iguodala finshed with 22 points on 3-6 shooting from three-point range, while Green recorded a triple double: 11 points, 19 rebounds, 13 assists. Curry had a chance to put Golden State up a point in the final seconds, but his three-pointer under pressure bounced off the rim.

Lowry, for one, came out firing in Game 6, scoring ten points in just over two minutes to become the fastest double-digit scorer in the NBA Finals in at least 43 years: He finished with 26. Toronto’s path to the title started last summer, when the team traded popular All-Star DeMar DeRozan — Lowry’s closest friend on the team — to San Antonio for Leonard, another free agent this summer who had expressed no interest in playing in Toronto. So the Raptors took a calculated risk. Rent Leonard for a year, perhaps, but give themselves a better chance at a championship. Lowry felt betrayed. Leonard reached out to him. “I texted Kyle probably a day later — or the day I got traded and told him let’s go out and do something special,” says Leonard. “I know your best friend left. I know you’re mad. But let’s make this thing work out. And here we are today.” 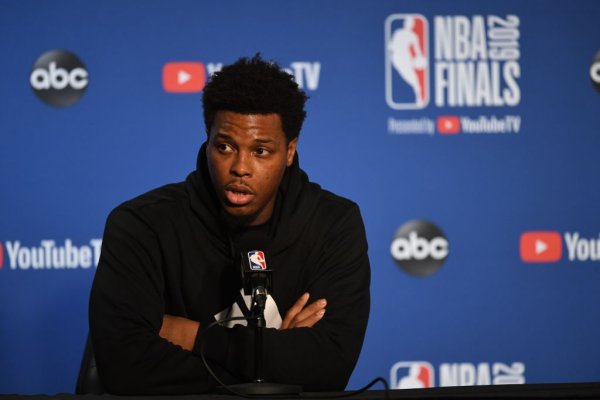