US Capitol Building in Washington, D.C. on Feb. 27, 2019. 2 gun control legislations have been passes through the House of Representatives in the past week. One to require background checks and the second to allow a 10 day review period of the background checks.
NurPhoto/Getty Images
Ideas
By Chris Murphy and Dianne Feinstein
Murphy is a United States Senator representing Connecticut.
Feinstein is a United States Senator representing California.

Another week, another community ripped apart by a mass shooting. Most recently it was Virginia Beach, where a shooter on May 31 killed 12 people in a municipal building.

In early May it was a school in Denver where two shooters injured eight and killed one heroic student who tried to stop them.

Just a week before that it was a synagogue in Poway, Calif., where a shooter with an assault rifle shot one worshipper dead.

We’ve seen 150 shootings in the first 150 days of 2019. And more than 100 days have passed with Senate Republicans refusing to debate and vote on universal background check legislation that the House has already advanced.

In the last decade, we have seen students and educators gunned down in school shootings in Parkland and Newtown. Parishioners murdered in a church in Charleston. A massacre at an outdoor music venue in Las Vegas. A nightclub in Orlando. A theater in Aurora. A mall in Burlington. A college in Blacksburg. A church in Sutherland Springs.

It’s a catastrophic list of outrages against our nation, and it just scratches the surface.

It doesn’t begin to capture the lives lost every day to incidents of urban and domestic gun violence, which rarely make headlines.

As members of Congress whose lives – personal and professional – have been shaped and affected by senseless gun violence, we refuse to grow numb to these heartbreaking events. While cable news has developed a well-worn process for mass shootings, for us each one is a fresh wound.

One thing is clear: the laws on the books are insufficient and an ineffective deterrent. The proof is in the ever-increasing death toll, and an overwhelming majority of Americans now agrees we should implement stricter gun regulations. But sadly, too many of our Republican colleagues continue to block change and allow the gun lobby to write our laws.

This hasn’t been the case in other countries.

In Australia in 1996, 35 people were killed when a gunman opened fire with two semiautomatic assault rifles. Australia quickly banned all semiautomatic rifles and enacted a licensing system.

More recently in New Zealand, 50 people were killed when a gunman opened fire in two mosques. They passed a law banning military-style assault weapons and high-capacity magazines less than one month later.

Opponents of gun safety laws say there’s nothing that can be done. They offer thoughts and prayers and then return to business as usual. They’re wrong: data has shown that tighter gun laws save lives. We can take action, but our opponents refuse to join because they live in fear of the National Rifle Association.

Here are a few things we can do to start saving lives today.

First, we need to make sure family members and police have legal ways to keep guns away from individuals who are a threat to themselves and others.

These are called “extreme-risk laws,” and they allow loved ones and law enforcement to go to courts and get lawful orders to temporarily remove guns from the hands of dangerous people.

These laws are carefully constructed to maintain due process rights. A recent Associated Press poll found 76 percent of Americans support them.

But that’s only a first step.

A proposal with even more public support is universal background checks. Ninety-seven percent of Americans support background checks – including a majority of gun owners. But right now, anyone can go to a gun show or online and buy a gun with no background check at all.

Another loophole that should be closed allows gun sales to proceed by default if a background check takes longer than three days. This is the loophole that allowed the Charleston shooter to buy a gun in 2015 and kill nine people at Mother Emanuel Church.

The vast majority of background checks are completed in under 90 seconds. But if there is a red flag that means a background check takes longer to complete. It’s worth waiting that extra time to determine whether an individual should be barred from purchasing a firearm.

Finally, we should follow the lead of countries like Australia and New Zealand and reinstate the federal ban on assault weapons and high-capacity magazines.

We know that these laws would make a difference. The shooter in Virginia Beach used extended magazines that would have been banned if the 1994 assault weapons ban hadn’t expired.

Guns like the AR-15 aren’t used for hunting and they’re not viable for home protection. They have only one purpose, and that’s to fire as many rounds as possible, as quickly as possible.

Outlawing these weapons, an action supported by 60 percent of Americans, will bring down the number of mass shootings and reduce the number of casualties, just as it did when the ban first passed in 1994.

How long will voters allow their elected officials to remain out of step with their views?

Those of us in Washington certainly have different positions and represent different constituents, but passing laws that will keep our communities safe from gun violence is only controversial in the halls of Congress.

If 97 percent of the electorate supports universal background checks, but one party blocks passage of that law, the public is being ignored. And that’s not how democracy is supposed to operate.

That’s the way things are supposed to work. We identify problems and then find out how to solve them.

We have to break this cycle of gun deaths. We owe it to our voters and our children. We can’t allow our inaction to re-traumatize gun violence survivors.

The House took action. Senate Democrats are ready to vote. It’s time for Senate Republicans to show some courage and implement sane gun safety reforms. If we don’t, more will die. 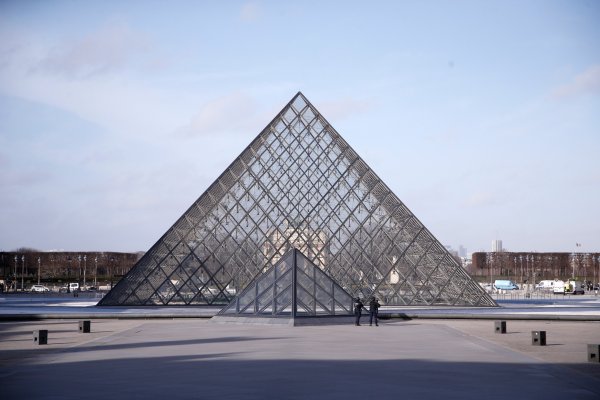 How Architect I.M. Pei Achieved Greatness By Forever Testing and Challenging Himself
Next Up: Editor's Pick