ABC's Charmless Grand Hotel Will Leave You Desperate to Check Out

Daytime soap operas are a breed unto themselves. Benignly addictive, they compensate in volume for what they lack in originality and talent. But in order to survive in prime time, especially amid so much competition, a soap needs to be better than that: to land as twisty, tawdry fun rather than as a rote rehash of tropes, the show must hook us with a killer cast–even if it’s just one scene stealer. Dynasty had Joan Collins. Beverly Hills, 90210 had Luke Perry and, for a while, Shannen Doherty. Empire has Taraji P. Henson.

Though it’s built on a foundation of soap stalwarts–sex, power, money, family, body-con dresses–executive producer Eva Longoria’s disappointing Grand Hotel lacks any such presence. Premiering June 17 on ABC, it chronicles the fractious Mendoza clan’s efforts to hold on to the last family-owned hotel in Miami Beach. Patriarch Santiago (Demián Bichir of The Hateful 8 and Weeds) inherited the place following the death of his wife; now he’s falling behind on payments to the loan sharks who’ve been keeping him afloat. His kids, playboy Javi (Bryan Craig) and business-school grad Alicia (Denyse Tontz), disapprove of Santiago’s marriage to their mom’s best friend Gigi (Roselyn Sanchez)–who has two feuding adult daughters of her own: sexy, insecure Carolina (Feliz Ramirez) and mousy, insecure Yoli (Justina Adorno).

The plot, adapted from Spanish series Gran Hotel, is predictable and the dialogue hacky. (“I haven’t called you here in the middle of the night to play games,” Gigi snaps in one scene.) But a good soap can make silly writing work. What it can’t overcome is poor casting. Framed as comic relief, bratty musician El Rey (Jencarlos Canela) is more irritating than funny. While potentially amusing antagonists like Carolina and Danny are flattened by charmless performances, the show wastes its best actors–Bichir, Robinson, Adorno–in bland roles. Grand Hotel could’ve been a fun summer getaway. Instead, it’s a joyless slog. 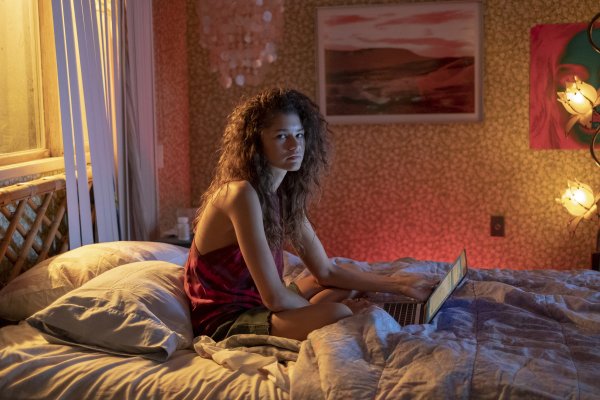 In HBO’s Bleak Gen Z Drama, Euphoria Is the Opposite of Happiness
Next Up: Editor's Pick