'If All of Us Come Out, We Can Win.' Hong Kong Protesters Call for Even Bigger March

Hong Kong activists are calling for renewed protests with an even bigger turnout this weekend after police yesterday fired tear gas and rubber bullets in an attempt to quell demonstrations amid a spiraling political crisis.

A leading pro-democracy organization announced a mass march against a bill that would allow extradition to mainland China at 2:30 p.m. Sunday, followed by a boycott of classes and work Monday.

“Even with brutal police force and the government’s orders for the violence, Hong Kong will never give up,” says Jimmy Sham, convener of the Civil Human Rights Front (CHRF), the group organizing the march.

CHRF is calling for protesters to once again convene at Victoria Park in an echo of the massive march that began there last Sunday and saw an estimated 1 million people rally against the extradition bill and Beijing’s tightening grip on the semi-autonomous territory.

“We had 1.03 million people come out on Sunday. This time, we will have more,” Sham said at a press conference Thursday.

The financial hub has been seized by an enormous backlash to the government’s attempts to fast-track the extradition legislation, which critics fear will undermine the city’s civil liberties and be used to target dissidents. In 1997, the former British colony was handed back to China under an agreement that promised to respect the city’s autonomy and independent judiciary, but the extradition fight has exposed deep-seated concerns over Beijing’s encroachment.

The protesters have so far won a partial victory as a reading of the contentious bill was postponed for a second time on Thursday.

But Beijing’s hand-picked Chief Executive for Hong Kong, Carrie Lam, refuses to back down from the bill, despite the mass mobilization against it. On Wednesday, she compared the protesters to difficult children, before later accusing them of inciting a riot.

The battle over extradition erupted into violent clashes Wednesday afternoon as police attempted to forcibly disperse demonstrators swarming the city’s legislature and barricading major boulevards. As tear gas, rubber bullets and bean bag pellets rained down on the young protesters, the sit-in effort shifted west and splintered. Over 70 people were reportedly injured in the skirmishes.

The police’s use of force drew condemnation from rights groups, but also drove first-time protesters—including white-collar commuters—out to the battle unfolding at rush hour.

A Hong Konger who asked that his name not be used because protesters have been jailed in the past said he was shocked to see photos and news reports of police charging the predominantly student-led movement. After work, he came to join them.

“It just makes me angry,” the 30-year-old account says of the police response. Though Wednesday night was his first-ever protest, he vowed to return every evening after work.

“I don’t want to see Hong Kong become like any other Chinese city where people are afraid to speak out. I don’t want my son to grow up like that,” he added.

On Thursday, amid a sudden summer squall, a small crowd of protesters reassembled outside the government offices to refresh stockpiled supplies as their occupation continues. Riot police stationed around the complex caused a stir as they stopped and searched people seemingly at random.

Anna So, 14, took the day off school to restock water bottles and masks. She says she went to three or four stores before she found one that wasn’t sold out.

At a collection point in Tamar Park around the corner from where the protests escalated into violence yesterday, she delivered her purchases.

“I think it’s important that I am here to support the demonstrations,” she says. “I want to protect Hong Kong. I don’t want Hong Kong to lose its freedoms.”

Further protests are expected in the run up to a vote on the bill that was previously slated for June 20, though it is unclear when deliberations might resume. If it succeeds in coming before the chamber, its passage is all but guaranteed in a legislature dominated by pro-Beijing lawmakers.

Sham, from CHRF, encouraged people to spread the word about the demonstrations and not give up hope. 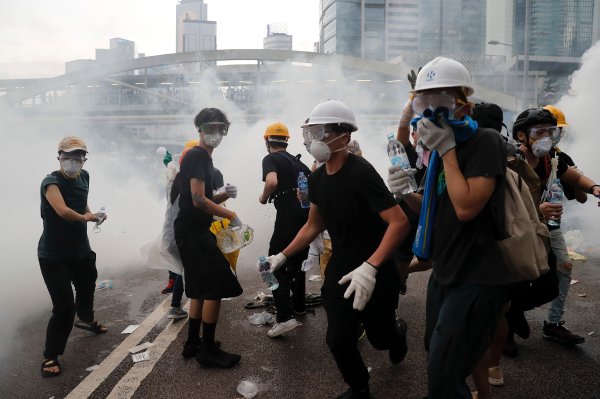