I'm in Prison Because I Fought For My City's Freedom. Hong Kong's Extradition Law Would be a Victory for Authoritarianism Everywhere

In December 2014, during the final days of the Umbrella Movement, prominent signs proclaiming We’ll Be Back sprang up along Harcourt Road, one of the three major thruways occupied by peaceful pro–democracy protesters for nearly three months. The protest did not achieve its objective of genuine universal voting to elect our chief executive, but it awoke a generation of Hong Kongers to resist Beijing’s interference and showed the potential of civil disobedience.

That promise was fulfilled when more than 1 million took to the streets against an amendment that would allow Beijing to request extradition of any individual from Hong Kong. The chief executive would have the final say, but since he or she is handpicked by the Chinese government, we have every reason to be troubled. Yet the peaceful march on June 9 failed to change Mrs. Lam’s unwavering mind, forcing protesters to take the next step. I was deeply moved when I saw on television protesters resisting authorities to retake Harcourt Road. Five years ago, I had been temporarily detained at the police station when the exact same thing happened. I have missed the action again but in a different place: the Lai Chi Kok Reception Centre. As a student leader of the Umbrella Movement, I am serving my third sentence in prison.

Here, information about the outside world can be limited, but I take every opportunity to follow the news on television or in newspapers. The hygiene conditions are poor, and there is nothing else with which to clean my table other than toothpaste. On these rainiest summer days, the extreme heat is so unbearable that turning the fan on seems only to make things worse. I share a cell with five other inmates with almost no privacy, and only a squat toilet. The moment I most look forward to every day is when the two friends or family members come to visit; I see them through a glass barrier and speak through a telephone.

Police advance towards protesters during a rally against a controversial extradition law proposal outside the government headquarters in Hong Kong on June 12.
Dale De La Rey—AFP/Getty Images

My lack of freedom today is a price I knew I would have to pay for the city I love. In the five years since the Umbrella Movement, but especially since 2017, when Mrs. Lam took office, our autonomy has further deteriorated: more opposition candidates deemed unacceptable by Beijing are barred from running for elected office; the pro-independence Hong Kong National Party is completely outlawed; a National Anthem Ordinance was proposed that would criminalize individuals who disrespect “March of the Volunteers.” China is dead set on making Hong Kong more like it. Not taking a stance will mean less freedom for all.

“Those who make peaceful revolution impossible,” President John F. Kennedy once said, “will make violent revolution inevitable.” While I continue to believe nonviolent resistance is the best way to safeguard our way of life, China and its puppet government in Hong Kong ought to be responsible for the escalation of the present crisis. And it is not an isolated case. Beijing’s imperial reach extends far and wide, from Taiwan and Xinjiang to the South China Sea and beyond. However this ends, our city will never be the same again.

As American security and business interests are also jeopardized by possible extradition arrangements with China, I believe the time is ripe for Washington to re-evaluate the U.S.–Hong Kong Policy Act of 1992, which governs relations between the two places. I also urge Congress to consider the Hong Kong Human Rights and Democracy Act. The rest of the international community should make similar efforts. A victory for Beijing is a victory for authoritarianism everywhere. Keeping an eye on this place sends an important message to Chinese authorities that democracy, not authoritarianism, is the way of the future. It also keeps our hopes alive knowing that we are not fighting alone. 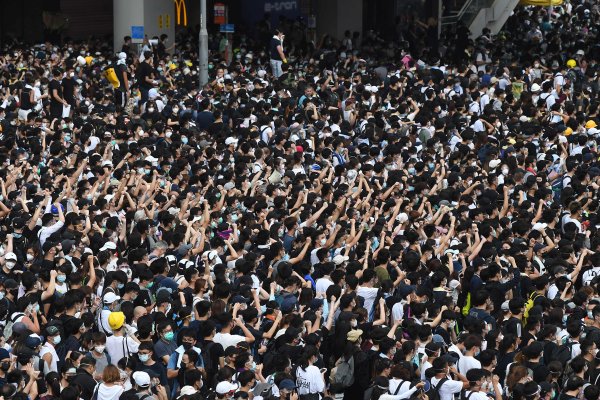 Hong Kong Was My Refuge, Now Its Freedom Is at Stake
Next Up: Editor's Pick