Hong Kong Was My Refuge, Now Its Freedom Is at Stake

Ideas
By Ma Jian
Ma Jian is the author of the novels China Dream and Beijing Coma, among other books.

Until it was handed over to China by the British in 1997, Hong Kong was a safe haven for dissident writers and artists. After my first book was banned by the Chinese government in 1987, Hong Kong became my refuge for 10 years. In independent bookshops I could read books that were banned in the mainland. Within the four walls of my small home on Lamma Island, I was able, for the first time, to write in complete freedom and feel entirely safe, knowing that no police officer would come knocking on my door. Hong Kong was a welcoming, ever changing harbor that felt alive with new ideas and possibilities.

The Basic Law, Hong Kong’s mini constitution that came into force in 1997, was supposed to guarantee that the territory’s freedoms and way of life would remain unchanged for 50 years. But by then, fellow dissidents and I sensed in our bones that Hong Kong’s independence was doomed. We had seen that the Chinese Communist Party never kept any of its promises to respect freedom and human rights, and we feared that well before 2047, China and Hong Kong would become “one country, one system.” On the day of the hand-over, as the People’s Liberation Army marched over the border, we walked onto the streets banging drums and tossing white “spirit money” into the air, enacting funeral rites for Hong Kong’s independence.

Now it is clear that the Chinese Communist Party had no intention of allowing Hong Kong to maintain its unique way of life. Judicial autonomy, press freedoms and civil liberties have been continuously eroded. This April, nine leaders of the Umbrella Movement were charged with “public nuisance” offenses. Four of them, including legal scholar Benny Tai and sociology professor Chan Kin-man, have been jailed. Three heroic young activists—Joshua Wong, Nathan Law and Alex Chow—who campaigned for universal suffrage, were imprisoned. In 2015, five booksellers were abducted to China by secret police.

Last October, in another attack on press freedom, the Financial Times journalist Victor Mallet was denied a work visa by the Hong Kong government. It was widely assumed to be punishment for chairing a talk by pro-independence activist Andy Chan. Since I left after the handover, I have frequently returned to Hong Kong, but I never felt in danger until November 2018. A few days before I was due to attend the Hong Kong International Literary Festival to discuss my novel China Dream, a satire of Xi Jinping’s Orwellian rule, I was told my events were canceled. I went anyway, determined, if necessary, to hold the talks in the street. After a public outcry, the events were re-instated. But throughout the trip, I feared for my safety. From the moment I emerged from passport control, a loyal friend stuck by my side, even sleeping on a camp bed in my hotel room, lest I be kidnapped by China. It is a fear all dissidents in Hong Kong now face. But if the extradition bill passes, this already grave situation will become much worse. Any opponent of Xi’s regime could be legally and openly abducted.

In Tibet and Xinjiang, the Chinese Communist Party has in the main succeeded in crushing calls for freedom and true autonomy. It has incarcerated over a million Muslim Uighurs in concentration camps—one of the most atrocious and horrific abuses of humanity scarring the world today. The situation of Hong Kong is different. Unlike their mainland compatriots, Hong Kongers have grown up knowing what it feels like to be free. Aware that this freedom is now in danger, they will not relinquish it without a fight. Those crowds today on the streets of Hong Kong braving riot police, water cannons and tear gas understand that the Chinese judicial system is a tool of the state. Once accused and extradited, there is no chance of a fair trial.

They are struggling not just for their own personal liberty but for the soul of their territory. Will Western leaders abandon them as they have Xinjiang? If they fail to stand up to Beijing now, then eventually all of us, in every country around the world, could risk becoming the harried dissidents and fugitives of the Chinese Communist Party’s inhumane rule. 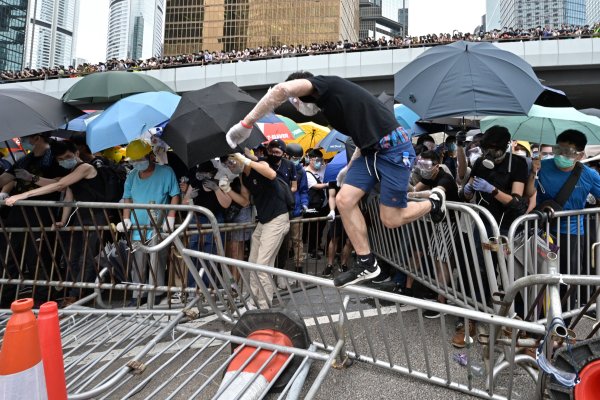 Hong Kong Gripped by Fresh Protests
Next Up: Editor's Pick