Q&A With Jon Hamm: No, You Do Not Want to Be Don Draper

Jon Hamm as Don Draper is a little like Superman in reverse: he puts on a suit and tie, slicks his hair back, and suddenly he’s superhuman (if somewhat more fallible).

When I visited the Mad Men set for my Time cover story on the shooting of the final season (which premieres Sunday, April 13 at 10 p.m. on AMC), I got a few minutes to speak to Hamm in Clark Kent mode–tie un-tied, hair un-slicked, taking a break between takes on the lot of the Los Angeles Center Studios downtown. (Earlier, I posted my lengthier interview with creator Matthew Weiner.) The transcript below is edited for length and clarity:

That incredible Hershey pitch [in the season 6 finale] was a situation we’ve seen Don in so many times–he’s in a professional crisis, a personal crisis and yet he goes into a pitch meeting and reaches inside himself and saves the day. And here it was sort of the opposite; he did something that was personally important for him but it also ruined the pitch. What do you think caused him to get to that point?

Hamm: You know, I recently got to see that scene again because it was shown at the AFI, and I hadn’t really seen it since it aired. A friend of mine was saying it’s funny because you look at that scene and you kind of think–because we’ve seen him in that situation before–are [the Hershey executives] gonna buy this? Because it is moving. It’s just inappropriate. And we’ve seen something like that with Don–the Carousel or even back to the pilot when he pulls “It’s toasted” out of his ass.

So he was kind of thinking, “They might buy this. It’s unorthodox but it’s a way to go.” And, of course they don’t, but he couldn’t go in there and fake it with that particular product because it meant so much to him personally, and it just sort of spilled out in a very raw and visceral way.

We’ve seen Don repeat some self-destructive patterns in his life, and at the end of last season he seemed to be making some sort of decisive break with that. Do you feel he is capable of change?

I think part of why the character is so interesting is that he is a person that has habits, and not all of them are good, but yet he has shown the ability to surprise you every now and again. And I think events leading up to the end of last season and Don’s confession [at the Hershey pitch] I think was a watershed moment in his life–and I do think that was a big step for Don.

Now, there are repercussions that don’t have to do with just him. Being put on leave from the agency and having a tenuous situation at home are the fallout. So he’ll have to manage both of those. But I hope for for Don that he is able to find some measure of peace with not only who he is and who he was but who he wants to be.

Do you find anything admirable about him?

There haven’t been a lot of examples in recent history. He’s taken two steps back for every one step forward. What I find admirable about him is that he’s a creative guy and he sticks to his guns creatively. In his own way he’s an artist and he wants to be taken that way, even though he works in a very commercial, no pun intended, medium. That’s probably the only thing I can come up with.

You know, we started the show in 1960 in the waning of the Eisenhower era and pretty much the maximum of America’s global influence. And these guys were at the center of it and driving it basically– spreading the word about the American Dream. And the American Dream was basically the American Dream for white males. And so over the course of the decade we’ve seen that power slowly whittled away–you’re looking at the rise of feminism and women in the workplace, the rise of African Americans and civil rights and homosexuals, and all of this stuff kind of percolating underneath. And it’s placed in this incredibly vital time and place – New York City was arguably the most important place in the world in the sixties. And by the seventies was a dump. You’re like, “What happened? We had it all wired. And then it just all stopped.”

But advertisers were still selling ads and still selling this dream that had shifted and changed, so they had to change how they pitch, and it became more ironic and it became more oblique. And we have guys like Ginsberg and Peggy and Stan coming up and pitching new ideas that the older guys just don’t get. The times have changed. Music has changed. We had the scene where Don puts on “Tomorrow Never Knows” and he’s like, “I don’t like this garbage.”

We touched on that very early in the show. Season two, episode one was called “For Those Who Think Young” and it was about everything being pitched to young people. We’re still in that mode. Take a look at any movie – any movie that’s not released in December is basically for 14 year olds .

Are you surprised how much a lot of fans like Don Draper?

Well, people like Walter White, too, and the guy’s a murderer. People like Tony Soprano, another murderer. There’s a vicarious thrill to seeing these people do bad things on television and mostly get away with it. People love Omar [the stickup man from The Wire]. You like the bad guys sometimes if they’re not too bad or if you feel like there’s a heart of gold somehow.

But I’m always surprised when people are like, “I want to be just like Don Draper.” I’m like, “You want to be a miserable drunk?” I don’t think you want to be anything like that guy. You want to be like the guy on a poster maybe but not the actual guy. The actual guy’s rotting from the inside out and has to pull it together.

But, and again that’s one of the biggest themes on the show: the outside looks great, the inside is rotten. That’s New York City. That’s America in the sixties. That’s all that stuff. It all looks great and when you scratch the surface you’re like, “Oh, it’s hollow and it’s rotten.” It’s advertising. Put some Vaseline on that food, make it shine and look good. Can’t eat it, but it looks good. 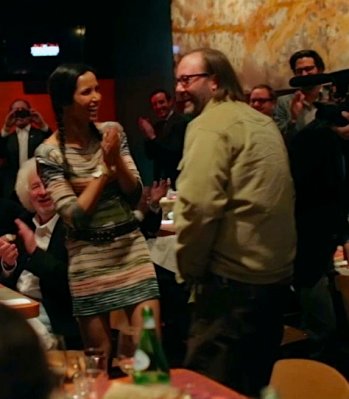 VIDEO: The World's Best Chefs Punked Wylie Dufresne for One Epic Meal
Next Up: Editor's Pick