Joe Biden Is Ahead in the Iowa Polls. But His Rivals Are Ahead on Organizing

To read the polling binders, former Vice President Joe Biden is a runaway favorite here in Iowa in the Democratic primary. But behind the scenes, he’s playing a furious game of catch-up.

As the Democratic frontrunner kicked off events Tuesday in Ottumwa for his second two-day swing through Iowa, he was ahead of other candidates in polls and name recognition. But many of the others in the historically large field have been rolling out endorsements, building ground operations and wooing voters in living rooms, hotel conference rooms and fairgrounds since long before Biden officially kicked off his campaign in late April.

With a strong second tier of candidates plugging away each week, Biden is on defense to protect his lead. And with less than eight months until the ever-crucial Iowa caucuses, operatives say the race is still anyone’s for the taking.

Nowhere was that more evident than Cedar Rapids on Sunday, where 19 of the 24 candidates showed up for a cattle-call, ready for action. As the candidates made their case in five-minute speeches inside the DoubleTree convention center, their supporters rallied outside with attention-getting tactics. It was as close to a proxy display of organizing power to date.

Biden missed the event to attend his granddaughter’s graduation and to celebrate his daughter’s birthday.

“There are some things more important than running for President, and my daughter and granddaughter are two of them. So I’ll make the same decision every time,” Biden prepared to tell Iowans on Thursday evening.

But in keeping with his campaign’s strategy of looking ahead to the general election, he showed up in Iowa after his rivals had departed and on the same day that President Donald Trump was visiting. “It wasn’t planned that way, but I hope Trump’s presence here will be a clarifying event,” Biden was scripted to say. For Team Joe, the real race is against Trump and not against his fellow Democrats. It’s part of the reason he’s not rushing to these come-one-come-all events, such as a forum focused on African-American issues at the end of the week in Charleston, S.C.

The other Democratic candidates are pinning their hopes on the fact that, historically, the early frontrunner rarely maintains the lead all the way to the start of the primary season. Just ask Presidents Jeb Bush or Rudy Giuliani. A stumble by Biden, a viral social media moment or a stronger performance at the upcoming primary debates could provide a breakout moment for rivals. (Buttigieg’s campaign got a huge boost from a single CNN town hall.)

But Iowa experts say to capitalize on that, candidates will need to have boots on the ground.

“When you have this many campaigns, it’s hard to find good staff. And it’s hard to find good field organizers,” said Grant Woodard, a Des Moines attorney with experience as a Democratic strategist. “If all these campaigns are all looking for some big breakout moment, their moment in the sun … you need to actually have organizational capacity to capitalize on that because it’s all fleeting.”

Among Iowa Democratic operatives, the clear consensus is that the two candidates doing the best on that front are Warren and Booker.

“Those two are in a class of itself in terms of boots on the ground,” said Sean Bagniewski, the chair of Polk County Democrats. “The problem that you’re seeing is that Booker and Warren came in and scooped up [the talent].”

Sanders is also often name-checked as one of the candidates with an extensive ground operation currently in the works, and he remains the candidate closest to Biden in polling. In the latest Des Moines Register poll, he trailed the vice president by eight points in a poll with a 4-point margin of error. That puts Sanders in a virtual tie with Warren and Buttigieg.

Biden is certainly thought to have the potential to catch up in Iowa in measures outside of polling, where the stakes are high for someone who is such a recognizable Democratic figure. Biden is betting big on his electability argument, that he alone is best positioned to make Donald Trump a one-term President. Biden’s first stop Tuesday? One of the 32 counties in Iowa’s 99 counties that Trump flipped from red to blue in 2016.

“I would say that Biden has to win Iowa. I mean, being the former vice president of the United States, I think if he doesn’t win Iowa, I think that could be the death knell of his campaign,” Woodard said.

Inside Biden’s inner-circle, that is their nightmare scenario, evoking memories of his 1988 bid that ended before Iowa and 2008, when he dropped out late the night of the caucuses.

On Tuesday, Biden rolled out a round of endorsements, including an operative who proved pivotal to Barack Obama’s Iowa victory in 2008. Still, he was playing catch up to several of the candidates who are on his heels in various ways. Harris, for example, announced her first local elected official endorsement more than two weeks ago, and Booker rolled out an Iowa steering committee at the start of this month. Still, Biden is running at his own pace. And although he has yet to open his headquarters in Philadelphia, he’s making inroads in the early states. For instance, Biden recruited Jake Braun to run his Iowa operations. Braun has worked in Iowa politics since 2002 and has three presidential caucuses under his belt. And Biden lured away Julia Krieger, who had been Rep. Tim Ryan’s national communications director, to serve as his Iowa communications strategist.

Meanwhile, some candidates are very much banking their investment in Iowa ends up paying off. Delaney, for example, has been running for president since 2017 and fighting an uphill battle against low name recognition. He has visited all 99 counties, started airing ads during the Super Bowl way back in February of 2018, has made 29 trips to Iowa, and has eight offices in the state. He notes he has “similar efforts” in New Hampshire.

Asked whether he was counting on Iowa, Delaney, in a recent interview with TIME in his Des Moines headquarters, said, “I’m banking on early states, yes, absolutely.”

Meantime, fellow longshot candidate Marianne Williamson, a self-help author calling for a “spiritual awakening” in the country, has moved to a Des Moines condo.

All of this action can be wearying for even the most committed voter. The Des Moines Register reported that the likeliest of caucus-goers say there are simply too many candidates on the Democratic side, and voters at several recent events had said they aren’t ready to commit to any of them just yet.

“The people that I’m talking to, they’re still very much in the gathering knowledge stage,” Madalyn Anderson, chair of the Story County Democrats, said.

For that reason, the field isn’t likely to shrink much anytime soon. Biden may still be the frontrunner, but he has 23 reasons to watch his back.

Write to Lissandra Villa at lissandra.villa@time.com and Philip Elliott at philip.elliott@time.com. 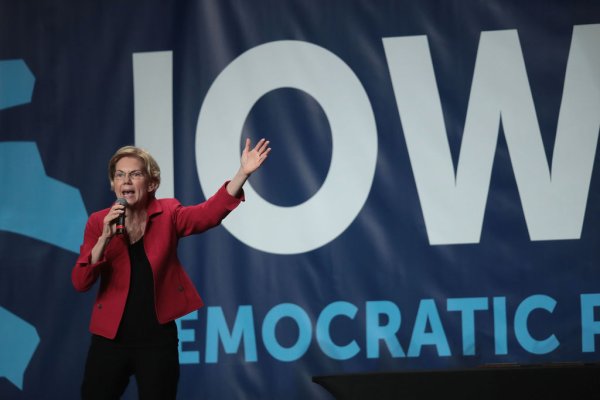 No Breakouts in Iowa 2020 Cattle Call
Next Up: Editor's Pick