Hong Kong’s leader Carrie Lam said Monday she will not scrap a contentious extradition plan or step down from her position, following a massive protest that gripped the city over the weekend.

Speaking from the Legislative Council where hours earlier police and holdout protesters had clashed overnight, the Chief Executive doubled down on her commitment to the proposed legislation. She told reporters the bill will be a “long-term benefit” to the city. “No one wants to see Hong Kong be a haven for fugitives,” Lam said.

On Sunday, hundreds of thousands of people joined a demonstration that choked major thoroughfares as it snaked its way from Hong Kong’s Victoria Park to the Legislative Council, displaying widespread opposition to a bill that would allow China to extradite fugitives from the semiautonomous region. Protesters chanted “Carrie Lam, Step Down” and “No China Extradition” as they marched in the city’s largest protest in years. Police estimated 270,000 people participated, but organizers say more than a million people—or nearly one in seven Hong Kong residents—took part.

Lam thanked those who joined the largely peaceful march, but condemned the clashes that broke out around midnight when riot police brandishing batons and tear gas moved to clear out protesters who threw metal barricades at officers.

“I want to thank every one of you because…the scrutiny helps to enhance good governance,” she said.

The Chief Executive said the demands of Hong Kong citizens have been heard, but insisted that the bill “will resume its second reading debate on June 12.”

Critics say the extradition bill signals Beijing’s creeping encroachment on the territory, which was returned to China from British rule in 1997. The legislation would allow Beijing to round up opponents that live in or transit through Hong Kong, threatening the city’s judicial independence and further eroding its democratic freedoms.

Lam denied taking direction on the bill from Beijing and pledged to further educate opponents.

She ignored questions about the protesters calling for her resignation.

At a press conference following Lam’s remarks, opponents chided her response and vowed to keep fighting.

“We don’t need more explanation [or] more safeguards. We want this to be scrapped completely,” says Claudia Mo, a pro-democracy legislator. “There is no fair trial, humane punishment guarantees in the mainland. There’s no trust, no confidence.”

The extradition critics called on Hong Kong residents to stage fresh protests Wednesday morning, when lawmakers will gather to debate the bill.

“Until she withdraws the amendment, we will keep fighting,” says Jimmy Sham, a convener of the Civil Human Rights Front, a coalition of pro-democracy groups that organized Sunday’s march. 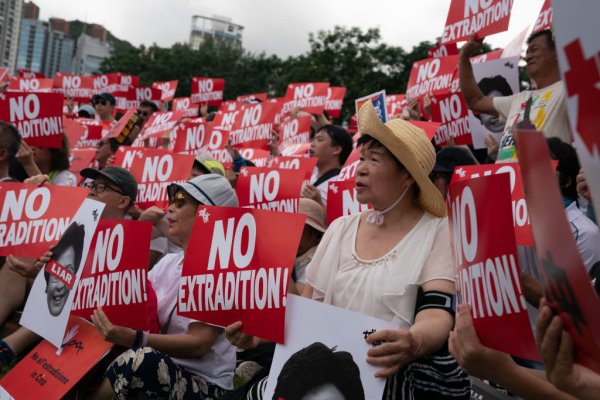