Mary Beth Tinker and her brother, John, display two black armbands, the objects of the U.S. Supreme Court's agreement March 4th to hear arguments on how far public schools may go in limiting the wearing of political symbols. The children, both students at North High School, were suspended from classes along with three other students for wearing the bands to mourn the Vietnam war dead.
Bettmann—Bettmann Archive
By Jasmine Aguilera

Valedictorian Nat Werth of Sheboygan Lutheran High School in Sheboygan, Wis., tried to come out as gay during his May 24 graduation speech. Instead, he sat and watched most of the ceremony go on without him after administrators deemed his speech inappropriate, barring him from delivering it even after he submitted a rewrite.

“I wasn’t mad at graduation. I was dignified because I knew that I had done nothing wrong and that I did everything that I could,” says Werth, 18. “I’m not going to waste any time feeling guilty or bad just for doing the right thing. So at graduation I held my head up and made it across the stage.”

Werth is one of a handful of students who have had their graduation speeches blocked in some way in recent years, raising questions about the tension between students’ freedom of speech and school administrators’ power to censor students or otherwise control scholastic events as they see fit.

Another such student, Rooha Haghar, can be seen in a now-viral video standing in front of a podium in a blue cap and gown delivering her valedictorian speech this year at Emmett J. Conrad High School in Dallas until her microphone shuts off at the mention of Trayvon Martin and Tamir Rice, black children whose deaths at the hands of a neighborhood watchman and police officer, respectively, fueled national outcry and protests. Like some other students in similar situations, she shared the video online, also alleging that the principal signaled for her microphone to be cut off. The video has 1.7 million views as of Monday morning, meaning it was seen by a dramatically larger audience than her high school class of about 250.

Haghar seems hopeful that some good will come of what happened to her. “I just feel like this situation is a learning opportunity,” Haghar said in an interview with CNN’s Don Lemon.

In a statement to TIME, the Dallas ISD says, “We educate leaders of tomorrow and encourage student voices, and we are looking into this matter.”

While more attention is being paid to censored speeches this graduation season, it’s not a brand new phenomenon. In 2018, the Roman Catholic Diocese of Covington in Kentucky told two students at Holy Cross High School that their graduation speeches were inappropriate and were stopped from delivering their speeches. One of the students, Christian Bales — the class of 2018’s valedictorian — is gender non-conforming, which he says he thinks played a role in the decision.

“I’d be lying if I said I didn’t feel that way,” Bales tells TIME. “I kind of bite my tongue a little bit because I don’t have concrete evidence. But that’s something that queer people go through a lot, it’s not a new struggle, so anyone who has been in that position would know immediately.”

Justin Driver, professor of law at the University of Chicago Law School, says incidents like these are alarming.

“I find it deeply distressing that schools are censoring students for bringing up controversial ideas,” he says. “If they’re stopping students even before they deliver the speech, that’s especially frowned upon in First Amendment circles because it’s regarded as what’s called prior restraint … that’s especially dangerous because it will kill speech.”

Students at public schools are protected by the First Amendment, with the stipulation that speech does not disrupt education. But both Werth and Bales attended private schools, where students’ speech isn’t protected at the same level.

In 1965, a young Iowa middle schooler named Mary Beth Tinker decided to wear a black armband to school to protest the war in Vietnam. She was suspended for doing so, eventually leading to 1969 Supreme Court case Tinker v. Des Moines Independent Community School District. In a 7-2 decision, the court found that students at public schools maintain their First Amendment right to free speech. “It can hardly be argued that either students or teachers shed their constitutional rights to freedom of speech or expression at the schoolhouse gate,” wrote Justice Abe Fortas in the majority opinion.

Tinker, who is now a free speech activist, says she has talked to administrators in schools across the country about enabling students to voice their political opinions. “Young people have to have a say about what is going on in their schools, in their communities, in their lives,” Tinker tells TIME. “I was so heartened to hear some of the students, like Rooha Haghar, and others who have been speaking up about these issues.”

The difference between public and private institutions

Because public schools are run by the state, they are considered subject to the First Amendment’s protections of free speech.

But Werth and Bales attended private schools, which have far more freedom to set their own rules and norms for student speech.

Neither student is sure if their rights were violated, but both had other opportunities to speak publicly despite censorship by their schools. Werth’s experience with his school led to an invitation to speak on June 7 at the Milwaukee Pride Festival, while Bales delivered his valedictorian speech on a megaphone minutes after the school’s official ceremony.

“It’s admirable that these students are trying to vindicate their free speech rights,” Driver, the law professor, says. “I think it requires a tremendous amount of courage for a 17-year-old or 18-year-old students to stand up to school officials. That was true in Des Moines, Iowa, in the 1960s, and it remains true today.” 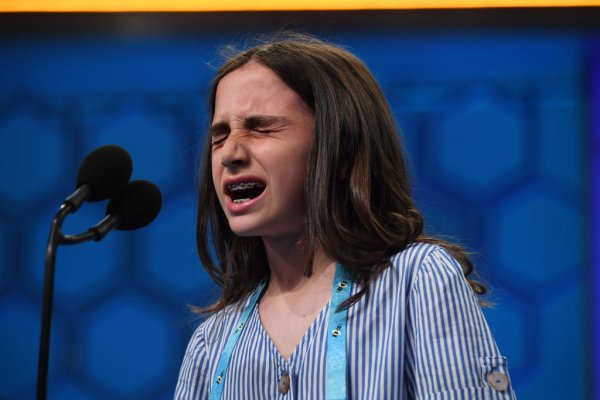 Here's Every Word That Stumped Spellers During the 2019 Scripps National Spelling Bee
Next Up: Editor's Pick