In 2016, legalizing marijuana was a niche issue. Vermont Sen. Bernie Sanders mentioned it occasionally, while former Secretary of State Hillary Clinton supported the lesser step of removing pot from Schedule I of the Controlled Substances Act.

Things have changed. Nearly every major Democratic contender for the 2020 nomination has come out in support of legalizing marijuana at the federal level, and several candidates have gone even further, proposing expunging non-violent marijuana convictions and investing in communities harmed by the War on Drugs.

“It’s really an anomaly in the history of presidential politics in this country to have almost all the major Democratic candidates coming out for legalization,” says Erik Altieri, executive director of National Organization for the Reform of Marijuana Laws, which supports legalization. “Basically, everyone except for Joe Biden is pretty good on this.”

Biden, who does not have a cannabis policy listed on his website, has opposed legalization in the past, called marijuana a “gateway drug” and helped shepherd the strict 1994 crime bill, now controversial among the Democratic grassroots.

While Sanders was the first candidate to introduce marijuana legalization into his regular stump speech in 2016, 2020 candidates are catching up. Sen. Elizabeth Warren, who once vacillated on a Massachusetts legalization initiative, has co-sponsored a bill with Republican Sen. Cory Gardner to protect state legalization efforts and has said on the campaign trail that she favors full legalization nationwide. Sen. Kamala Harris, who once opposed a 2010 California initiative to regulate and tax recreational marijuana, now favors nationwide legalization as well. On Wednesday, Sen. Kirsten Gellibrand unveiled a plan to legalize marijuana, which includes taxing legal cannabis and helping small businesses in black and Hispanic communities.

Advocates of marijuana legalization say that Sen. Cory Booker has been a leader on the issue.

He recently reintroduced his Marijuana Justice Bill in the Senate, which would legalize marijuana, expunge criminal records of nonviolent marijuana convictions and creates a “community reinvestment fund” for job training and other services for communities that have been disproportionately hurt by the War on Drugs. Gillibrand, Warren, Harris and Sanders are all co-sponsors of the bill.

Still, legalization opponents point to Biden’s opposition as evidence that full legalization is not as popular as some might think.

“It’s true most of the candidates generally support legalization, but they are not framing their support as being pro-marijuana as much as pro-social justice,” says Kevin Sabet, President of Smart Approaches to Marijuana, which opposes full legalization. “That gives them a lot of room in the general election to move back to the middle and endorse light decriminalization, which is different than full commercial legalization.”

Experts say that while most 2020 Democrats are talking the talk on marijuana reform, they’re waiting to see who has the most effective plan to get it done. Plans to legalize cannabis in New Jersey and New York recently failed in part because legalizing and regulating a substance that has thrived on the black market is not easy to do.

“Every candidate on the Democratic side will say good things on marijuana legalization,” says Michael Collins, director of National Affairs for Drug Policy Action, which advocates for marijuana reform. “The devil is in the details.” 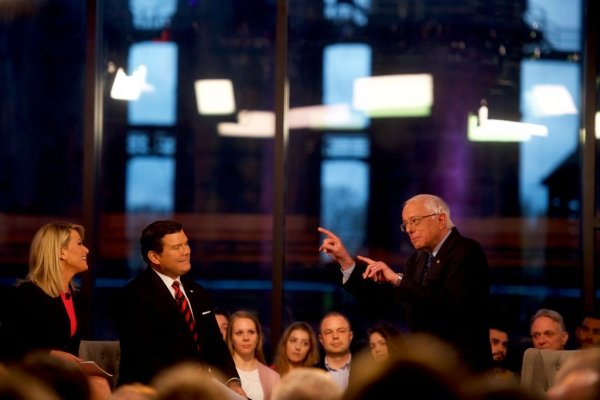 The 7 Most Memorable Moments From 2020 Democratic Town Halls
Next Up: Editor's Pick