Cats may now be able to sleep even easier if a New York state ban on declawing is signed by Governor Andrew Cuomo.

The bill banning the procedure passed through the statehouse on Tuesday. Upon Cuomo’s sign-off, cat owners could face fines of up to $1,000 for putting their pets through the procedure, unless it is deemed medically necessary.

The ASPCA’s website describes declawing, also called an onychectomy, as “amputation of the last digital bone, including the nail bed and claw, on the front of each toe.” The website goes on to say that cats “suffer from significant pain while recovering from this procedure.” (Per the ASPCA, it is better to clip cats’ nails regularly and provide them with scratching posts than to declaw them.) Assemblywoman Linda Rosenthal, a sponsor of the bill, wrote in a statement on Twitter, “It is not like getting a mani/pedi.”

Cats are often declawed in an effort to prevent them from scratching. According to the Humane Society of the United States, however, scratching is “normal” cat behavior. Their website explains that “cats scratch to remove dead husks from their claws, mark territory, and stretch their muscles.”

According to the New York Times, Rosenthal argued during deliberations on the bill that many people who declaw their pets, “think their furniture is more important than their cat.”

Opponents of the bill, however, say that declawing is preferable to cats not having a home. In a statement released in May, the New York Veterinary Medical Society said, “Cats that would lose their home if not declawed face a higher risk of euthanasia than if their owner were able to care for them.” The society also pointed to cat owners who have illnesses like hemophilia or immune disorders, and who might suffer from cat scratches.

If Cuomo approves the bill, New York will be the first state to ban declawing, a practice which is illegal in cities like Denver and Los Angeles, as well as countries like Germany and the United Kingdom. Other states, including California and New Jersey, are also considering similar bans. 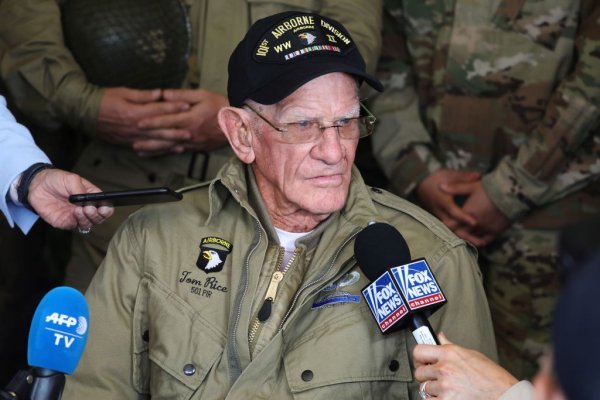 D-Day Veteran, 97, Parachutes Into Normandy Again
Next Up: Editor's Pick