U.S. President Donald Trump and First Lady Melania Trump arrived in London Monday for their first official state visit to the U.K, as protestors prepared to give the presidential party a rude welcome.

On Monday, the Trump and his wife Melania had a private lunch with Queen Elizabeth at Buckingham Palace. During the three-day visit the President is set to attend discussions with British Prime Minister Theresa May, commemorate the 75th anniversary of the D-Day landings, when 150,000 allied troops pushed German forces from France, and fly to Ireland to meet Prime Minister Leo Varadkar.

But wherever Trump goes over the next three days, he’ll almost certainly be met with heated protests. Anti-Trump demonstrations are set to take place in London and across the U.K. during the visit. Kate Hudson, Secretary General of the Campaign for Nuclear Disarmament (CND), tells TIME she expects hundreds of thousands to gather from all around the country. “There’s very strong opposition to Trump in the U.K.,” she says.

Trump stirred controversy before he even landed. Speaking to the British tabloid newspaper The Sun, Trump backed Boris Johnson as Britain’s next Prime Minister, just days before May steps down as leader of the Conservative Party. “I think Boris would do a very good job. I think he would be excellent,” Trump said, adding “I like him. I have always liked him.”

During the interview, he also expressed “shock” at Meghan Markle’s “nasty” comments about him, but said she’ll make a good princess. The Duchess of Sussex, who will not attend the State Banquet as she’s on maternity leave having recently given birth, called Trump “divisive” and “misogynistic” during the 2016 presidential campaign. Trump has since denied calling Markle “nasty”.

Before leaving the White House on Sunday night Trump told the Sunday Times that Britain should “walk away” from Brexit talks and refuse to pay a 39 billion pound ($49 billion) divorce bill if it doesn’t get better deal from the European Union. He said he might meet with pro-Brexit politician, Nigel Farage, during his visit, and claimed Farage should be given a role in the Brexit negotiations.

Trump also fired back at London Mayor Sadiq Khan, who said that the language used by President Trump was similar to the language used by 20th century fascists in an article for the Observer yesterday. The U.S. President said the labour Mayor has done a “terrible job” and called him “very dumb”, “incompetent” and “a stone cold loser”.

Trump was greeted with a special welcome before Air Force One touched down in London. A group of green activists, Born Eco, cut a picture of a massive penis and the words ‘Oi Trump’ into the grass under the Stansted airport flight path.

Demonstrations will continue on Monday afternoon outside Buckingham Palace, with a protest called “Spoil Trump’s Banquet”, organized by a group named ‘Together Against Trump.’ Lindsey German, one of the protest’s organizers and a founder of the U.K.’s Stop The War Coalition calls it a “special unwelcome.”

On Tuesday, the largest anti-Trump protests are planned from 11am as Trump lunches with May at her 10 Downing Street residence. In response the Metropolitan Police are launching what they have called a “multi-faceted security operation” during Trump’s visit, according to a press release, issued Saturday June 1.

Police are blocking off part of the surrounding area on Tuesday, and several road closures and diversions will be in place. German says, “we’ll get as close to Downing Street as possible so that we effectively surround Trump and he won’t be able to ignore us.”

Once again activists plan to inflate a 20 ft tall balloon depicting Trump as an orange baby wearing a diaper, made possible by crowdfunding more than $37,000. Last year, Leo Murray, the creator of the balloon, told TIME “This is not a protest against America or Americans,” but a “protest against what Donald Trump is turning America into.”

Inflatable Trump flew over heads during mass protests last year on July 13 when the President visited the U.K. Even though Trump avoided London for most of his visit, it didn’t stop 250,000 people flooding the city center, and a total of about 400,000 protesters across the U.K. “It showed the strength of feeling. And that hasn’t diminished,” says Hudson.

Activists will also gather in Portsmouth on Wednesday when Trump, May and the Queen are to commemorate the 75th anniversary of the D-Day landings. Local authorities have erected a “ring of steel” to shield world leaders from the public.

Mohammed Ateek, a protest organizer from Stand Up To Trump and Syrian refugee activist, says he’s standing against Trump’s “harmful and divisive” policies. “It’s very important that people like me – immigrants, refugees – make our voices heard,” he says. “His policies affect the whole world.” Ateek believes climate issues will be at the heart of this year’s anti-Trump protests now that “so many more people are aware of it.” The President has repeatedly voiced skepticism about global warming, even when his own cabinet presented a report in 2018 warning of its devastating effects.

There’s now a greater “sense of urgency” to show opposition to Trump, says Hudson from CND. She’s opposed to Trump withdrawing from the Intermediate-Range Nuclear Forces (INF) Treaty – a major treaty with Russia to eliminate intermediate and shorter range missiles. “We want him to stay in the deal to prevent nuclear arms proliferation,” says German, who also criticizes Trump’s pressure on NATO members to increase spending.

Trump’s complaints about NATO date back his 2016 presidential campaign. He has since said the U.S. would not protect other members unless they increased their agreed upon 2% gross domestic product (GDP) spending on defense. “This is a violation of our national sovereignty. Only our government should decide how much it spends,” says Hudson.

A U.K. official said Trump’s NATO criticisms have been a “good thing.” The U.K. is one of the few countries in the NATO alliance which meets the 2% GDP defense spending target. “The reality is, the President’s pressure on this point has got results,” he said. “We agree others should be spending more […] but we think everyone should be at 2% now.”

But not everyone is marching to the same angry beat. Some Londoners are intent on giving Trump a warmer welcome. Republicans Overseas U.K., a political organization created in 2013 for U.S. citizens living abroad, is hosting a ticketed event in a central London restaurant on Tuesday evening to celebrate “the special Anglo-American relationship, the 75th anniversary of the D-Day landings, and the President’s visit of course,” says Sarah Elliott, U.K. Chair of Republicans Overseas.

For Elliott, the visit is an important sign of increasing cooperation between the U.S. and “it’s most important” ally. “We hope it’ll lay the groundwork for more trade between the countries,” she says. “With Brexit happening soon, the U.K, needs to focus on building stronger ties outside Europe.” The U.K. is currently the 7th largest goods trading partner with some $127 billion (two way) in total trade during 2018. U.S. exports to the U.K. were $66 billion last year, up by approximately 18% from 2017.

For the second year running, a west London pub will celebrate the arrival of the U.S. President by rebranding itself the “Trump Arms”. The weekend before Trump’s 2018 visit the Jameson pub was decorated in U.S. flags and brought together Trump supporters, wearing red caps reading “Make America Great Again”.

“Someone has to show Americans that we’re their friends,” says pub owner Damien Smyth, 54. “A lot of young people tell me they’re afraid to tell their friends they support Trump because they don’t want to be lambasted. It’s awful.”

May was the first foreign leader to visit Trump after his inauguration. He’ll be the last foreign leader to visit her before she resigns as head of the Conservative Party on June 7, drawing her three-year tenure to a close. May has said it’s a chance for the U.S. and U.K. “to strengthen” its already “close relationship.” But other U.K. politicians, including Labour leader Jeremy Corbyn, are boycotting the banquet.

The Conservatives will begin choosing a leader soon after Trump departs. Whoever it is, the U.K. official says, a strong relationship with Trump will be a “priority.” 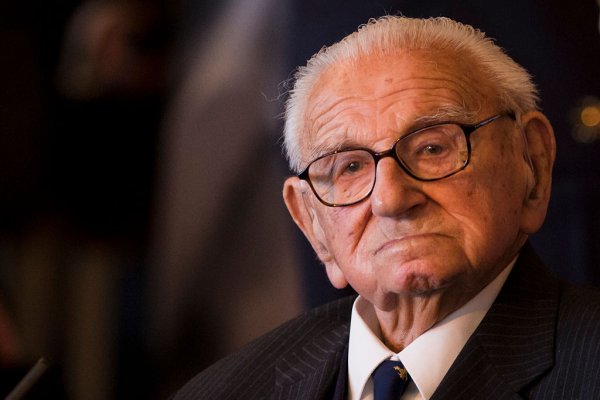 Theresa May Quoted a Humanitarian in Her Resignation Speech. A Child He Saved From Nazis Says That Was an Insult
Next Up: Editor's Pick