A young child was taken to the hospital after being struck by a foul ball at a Wednesday night game between the Houston Astros and the Chicago Cubs, visibly upsetting the player who hit the ball.

The Astros confirmed that a young fan was taken to the hospital after being struck by a ball at Houston’s Minute Maid Park, but did not offer details on the child’s condition. “The Astros send our thoughts and prayers to the entire family,” the club said in a statement.

The foul ball was hit by Cubs outfielder Albert Almora Jr. during the fourth inning, according to the Houston Chronicle. Almora was visibly shaken and comforted by teammates after the incident, and later appeared to cry after talking with a security guard in the area where the child had been injured, the Chronicle reports.

“God willing, I’ll be able to have a relationship with this little girl for the rest of my life, but just prayers right now,” Almora said after the game, according to the Chronicle.

The incident comes after a woman was killed by an errant foul ball at Los Angeles’ Dodgers Stadium last August. Her death was thought to be the first directly caused by a foul ball in about five decades, but fans are injured in this fashion fairly frequently. A 2014 Bloomberg report said 1,750 fans are injured by batted balls, most of them fouls, every year. In 2015, a woman also suffered life-threatening injuries after being hit by a broken bat at a Boston Red Sox game.

Last year, Major League Baseball announced that all 30 teams would extend protective netting, which is intended to stop balls from entering the stands, at least as far as the ends of both dugouts. Prior to that announcement, individual teams decided how much netting they wanted to use, prompting criticism from some fans—and players—who felt the league was not doing enough to protect attendees. 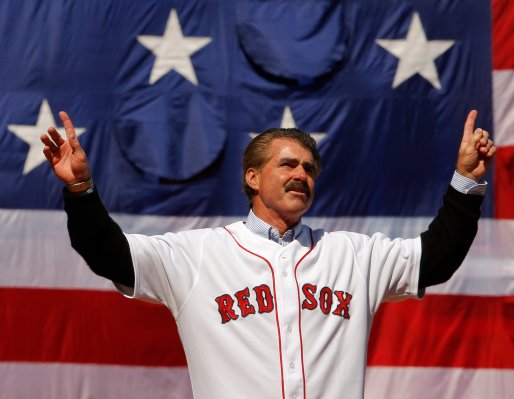 Bill Buckner Forgave Boston — and That's What Matters
Next Up: Editor's Pick