The U.S. Expects China Will Quickly Double Its Nuclear Stockpile

China is expected to increase its nuclear weapons stockpile by twofold in the coming decade, according to a new U.S. military intelligence assessment, part of a sweeping build-up of Beijing’s strategic arsenal.

“Over the next decade, China is likely to at least double the size of its nuclear stockpile in the course of implementing the most rapid expansion and diversification of its nuclear arsenal in China’s history,” Lt. Gen. Robert Ashley, the director of the U.S. Defense Intelligence Agency said during a speech on Wednesday.

Speaking at the Hudson Institute in Washington, Ashley also accused both China and Russia of covertly testing low-yield nuclear weapons in violation of a 23-year old international treaty. The allegation came less than three months before the expected end of the 1987 Intermediate-range Nuclear Forces agreement with Russia; and two years from the expiration of the landmark New Strategic Arms Reduction Treaty, or New START.

In response to the slow erosion of agreements, President Donald Trump has declared his desire to reach a post-Cold War détente with both China and Russia under an all-encompassing arms treaty. Yet that petition has been met by disinterest in Beijing and indifference in Moscow.

The grand bargain approach, critics say, is too time-consuming and unlikely to garner results within the remaining 19 months in Trump’s term. More likely, they say, it’s a stalling tactic for national security hawks in the Administration, such as Secretary of State Mike Pompeo and National Security Adviser John Bolton, who are known to be hostile toward international agreements.

“Pursuit of broader nuclear arms control deal with Russia and China is a worthwhile objective — but not at the expense of, or as a condition for, the extension of New START,” said Kingston Reif, director for disarmament and threat reduction policy at the Arms Control Association, a think tank. “So far the Trump Administration does not appear to have a plan or the capacity to negotiate a more far-reaching deal, which would likely take years. Which suggests that the real goal of this gambit is to run out the clock on New START.”

If New START sunsets, it will be the first time in the effort to limit the strategic stockpiles in the U.S. and Russia since 1972. The linchpin agreement limits each side to 1,550 deployed nuclear warheads and 700 deployed heavy bombers and ballistic missiles. It also includes a thorough monitoring and verification regime to help ensure compliance.

Tim Morrison, a senior director at the National Security Council, said New START’s expiration is more than a year away, which presents the Administration with more than enough time to try to secure that agreement. Trump has aspirations beyond a bilateral deal, he said.

“What we need to focus on is the comprehensive nuclear threat,” Morrison said at the Hudson Institute, after Ashley’s speech. “The higher priority is the totality of the Russian and Chinese programs, because we have so much time left on the clock for New START.”

Russia and the U.S. are capped at 1,550 deployed nuclear warheads until Feb. 5, 2021, when New START expires. After that, there will be no limits. China, however, only has an arsenal of an estimated 290 strategic weapons. So even if Beijing doubles its stockpile, as U.S. intelligence assesses, it will represent a fraction of those belonging to Washington and Moscow.

What has drawn U.S. officials’ attention is China’s arsenal of hundreds of smaller nuclear warheads, known as tactical nuclear weapons. These weapons are designed for use on the battlefield as opposed to strategic weapons, which are designed to destroy cities and hardened military targets. Numbers of those weapons are not capped under international treaty.

The Chinese military, headlong into a complete modernization of its forces, is nearly ready to field a so-called nuclear “triad” capable launching an attack from land, air, and sea — a capability Russia and the U.S. have had for decades. The Trump team points to this nuclear expansion as proof of China’s emergence on the world stage as a great power and why it must be included in future arms control conversations.

Analysts say China is more preoccupied with establishing regional preeminence in the Pacific. “It’s true that China has steadily expanded its nuclear forces,” said Hans Kristensen, a nuclear weapons expert at the Federation of American Scientists. “But their main goal is to deter regional powers, such as India and Russia.”

Meanwhile, Russia has about 2,000 tactical nukes in its arsenal. These include air-to-surface missiles, short-range ballistic missiles, air-dropped bombs, depth charges and torpedoes for surface ships and submarines, according to U.S. military assessments.

“We assess its overall nuclear stockpile is likely to grow significantly over the next decade,” Ashley said on Wednesday. “Russia’s stockpile of non-strategic nuclear weapons — already large and diverse — is being modernized with an eye towards greater accuracy, longer ranges, and lower yields to suit their potential warfighting role.”

The U.S. assesses that Russia has dozens of these systems already deployed or in development. One of the weapons, the Novator 9M729, was in violation of the Intermediate-Range Nuclear Forces (INF) Treaty, which led to its probable dissolution. First signed by President Ronald Reagan and Soviet Union leader Mikhail Gorbachev in December 1987, the INF treaty eliminated an entire class of nuclear weapons. It forced the superpowers to scrap more than 2,600 land-based missiles with ranges 310 to 3,420 miles — weapons considered destabilizing to the European continent because of their capability to launch a nuclear strike from anywhere without early warning.

Many U.S. military officials have viewed the United States’ adherence to the INF as a disadvantage with China, considering the country is not currently party to the INF. Beijing has more than 1,000 land-based missiles within INF range that could threaten U.S. and allies’ bases in the western Pacific and warships.

Ashley provided no proof for his claims that Russia and China likely violated the Comprehensive Nuclear Test Ban Treaty, which bans test explosions of nuclear weapons, known as a “zero-yield standard.” Nor did he indicate what further actions might be taken as a result of the violation.

A senior U.S. intelligence official said after Ashley’s speech that there is no consensus in the intelligence community that Russia has conducted a low-yield test, only that it is assembling the facilities that would be necessary to do so. The official said the Defense Intelligence Agency generally takes the “worst case” position on military matters, as it did on the question of whether Iraq had weapons of mass destruction.

However, said a second intelligence official, also speaking on the condition of anonymity because the remarks were not cleared for public release, the preparations for a possible test — which would be difficult to detect conclusively at a very low yield — fits a pattern of Russian arms treaty violations that began with the 2017 installation of medium-range cruise missiles in violation of the INF Treaty.

“There is concern in some quarters that Russia may be testing how the Administration responds to low-level treaty violations, especially given that it has abandoned a number of international agreements like the TPP, NAFTA and the Paris (climate) accord,” the official said.

The U.S. hasn’t tested a nuke since 1992, when then President George H.W. Bush declared a self-imposed testing moratorium. Four years later, the U.S. became the first of 184 nations to sign the Comprehensive Nuclear Test Ban Treaty. However, Congress never ratified it. 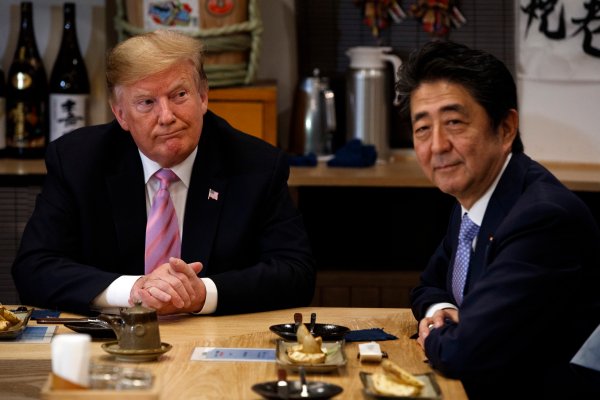 Trump's Japan Trip Was a Win for Abe
Next Up: Editor's Pick