The eXXpedition crew during the 2018 voyage to the North Pacific .
Eleanor Church/Lark Rise Pictures
By Kamakshi Ayyar

The first time self-described “ocean advocate” Emily Penn was confronted by the magnitude of the plastic pollution problem was during an international sailing expedition 10 years ago. She spotted bits of debris, things like toothbrushes, floating in the water a thousand miles from land, and saw beaches on remote Pacific islands piled high with waste. “I saw these huge changes to our marine environment that I had no idea were happening,” she says.

Now 32, Penn has since led numerous scientific sailing expeditions around the world that have conducted research on things like ocean acidification and toxics in the water. Plastic is a big source of those toxics; according to the U.N., about 13 million tons of plastic enter our oceans every year, damaging marine ecosystems and eventually infiltrating the global food chain. The material has been found in the depths of the Mariana Trench in the Pacific Ocean, the bellies of whales and the excrement of humans. One study suggests that micro-plastics can even be passed from pregnant women to their unborn babies.

Penn believes women must play an integral role in finding solutions, and aims to prepare more women with the skills and experience needed to tackle plastic pollution. Since co-founding eXXpedition, an all-women sailing crew that focuses on the environmental and health impacts of plastic, Penn has taken part in 11 voyages where women from around the world contribute to research projects and participate in community outreach programs. They have visited the Caribbean, South America and North Pacific Gyre, a massive, swirling soup of marine debris better known as the Great Pacific Garbage Patch.

Ahead of World Oceans Day on June 8, Penn spoke with TIME about the perils of plastics, changing how people think about pollution, and the role women play in protecting our oceans.

What drew you to researching plastic pollution and its impact on health?

As we studied the gyres, we realized that the pieces of plastic out there aren’t an island or great big raft, they’re actually breaking down into very small fragments, what we call micro-plastics. We also realized that there are other chemical pollutants in the ocean, in the plastics, and also getting into our bodies, that we really wanted to investigate.

Some of these issues, particularly chemicals getting into our bodies, are quite a female issue because they’re endocrine disruptors, they mimic our hormones. And so we wanted to tackle this problem with a team of women. Hence eXXpedition began, to get women to study this issue of plastic and toxic pollution.

When did you realize that micro-plastics are such a big problem?

It was when I started doing scientific work with Pangaea Explorations [an organization Penn co-founded in 2010]. We sailed to the South Atlantic Gyre, between Brazil and Africa, and we set off expecting to go to this accumulation zone where all the plastic was ending up. When we got there, we found surprisingly little floating on the surface, but when we took the net through the water, then we realized that what we were dealing with is trillions of micro-plastic pieces that you can’t see. Trying to clean up these pieces is so hard because they are so small. And now we know that a lot of it is sinking to the bottom of the ocean.

What has impacted you most during the expeditions?

The trip to the North Pacific Gyre, the Great Pacific Garbage patch last summer… it’s so unbelievable. I’ve been working on this issue for over 10 years and we pulled the most dense sample of plastic that I ever have [seen]. Which, given the amount of global awareness on the issue right now, we were hoping for something different. From purely the volume of plastic, that was horrifying.

And also, seeing the albatross swooping down to feed, they’re looking for little squid and things on the surface of the ocean. And knowing that they’re mistaking the plastic for food and taking it back to their chicks was really hard to see, you want to tell them to go away. I found that interaction really hard to watch.

Can you share details about the eXXpedition round-the-world trip coming up this year?

It starts in October and we will be sailing around the world for two years. We want to go to the other four of the five gyres — North Atlantic, South Atlantic, South Pacific and Indian — and also the Arctic, which is a place where plastic is not accumulating but unfortunately we still find evidence there. So we’re going to the most polluted and then technically the least polluted to be able to compare them.

How do you see women playing a role in protecting the ocean?

I guess women by nature have a nurturing instinct and are compelled to protect. We all share one ocean regardless of where we come from so this is an issue that transcends all political boundaries and borders. We need a multi-disciplinary and a multicultural approach to solving the problem. And women do well in mediating and collaborating and coming together for something that they care about. I wouldn’t like to exclude men from the cause. It’s really important that all of us find our role and work together.

The original version of this story misidentified the harmful chemicals caused by plastic waste. They are toxics, not toxins. 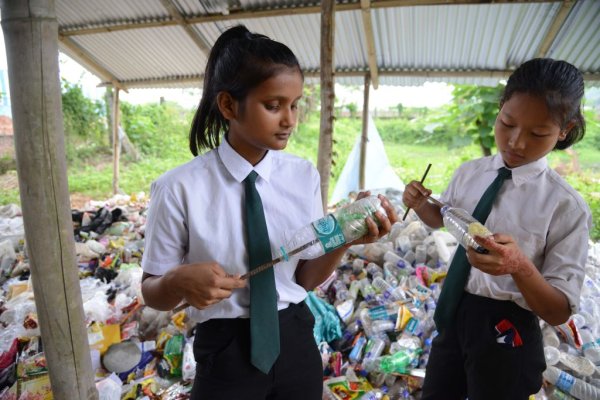 This Indian School Takes Plastic Waste as Tuition
Next Up: Editor's Pick