Germany Investigates Chinese Reporters It Says Were Snooping Around NATO Base

Chancellor Angela Merkel comes to a demonstration of the Very High Readiness Joint Task Force (VJTF) and talks to VJTF commanders and leaders on May 20, 2019 in Munster, Germany. In 2019, Germany will be responsible for the Nato rapid reaction force.
Christophe Gateau—picture-alliance/dpa/AP Images
By Arne Delfs / Bloomberg

The Xinhua reporters raised suspicion by filming military equipment and interviewing soldiers about their daily routines, according to a person familiar with the incident who asked not to be identified discussing security matters. They were accredited along with other journalists to enter the base and report on Merkel’s visit to the Very High Readiness Joint Task Force training area at Munster, Germany, on May 20.

A representative for Xinhua’s foreign affairs bureau said its reporters aren’t under investigation and were carrying out normal on-site interviews in Germany. Phone calls to China’s foreign ministry outside of business hours were unanswered, and there was no immediate reply to a fax seeking comment.

The U.S. government ordered Xinhua and broadcaster China Global Television last September to register under the Foreign Agents Registration Act. As a result, Xinhua is required in the U.S. to disclose activities and spending and to introduce disclaimers regarding its journalistic content.

Germany doesn’t have such a classification for media organizations, though reporters are liable to prosecution if they commit a crime. 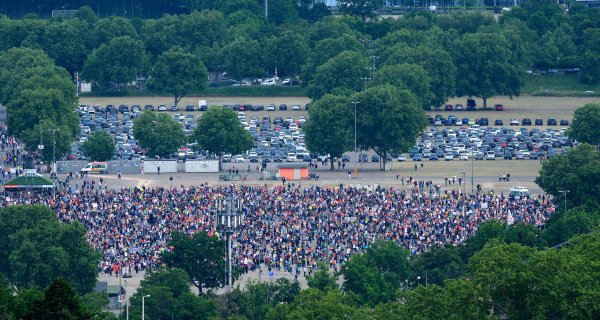