Students From 1,600 Cities Just Walked Out of School to Protest Climate Change. It Could Be Greta Thunberg's Biggest Strike Yet

Hundreds of thousands of students around the world walked out of their schools and colleges Friday in the latest in a series of strikes urging action to address the climate crisis. According to event organizers Fridays for Future, over 1664 cities across 125 countries registered strike actions, with more expected to report turnouts in the coming days.

The “School Strike for Climate” movement was first started by Swedish teenager Greta Thunberg, who began her strike outside the country’s parliament in Stockholm in August 2018 and has said that she will continue to strike until Sweden is aligned with the goals of the Paris Agreement. Since then, her singular action has spread into an international climate movement, organized by young people around the world. This strike followed the last co-ordinated event on March 15, which saw over 1.6 million people across 133 countries turn out at demonstrations according to organizers.

Thunberg was recently profiled on TIME’s global cover as a Next Generation Leader, along with nine other people shaping the world’s future. “This is not about truancy or civil disobedience, this is about the climate and the ecological crisis, and people need to understand that,” Thunberg told TIME in Stockholm, a couple of weeks ahead of the global strike.

“May 24 is the last chance to affect the E.U. elections. Politicians are talking about the climate and environmental issues more now, but they need more pressure,” she said. Voting across the European Union takes place May 23-26, where the 751 representatives of the European Parliament will be elected by citizens across the continent. Recent polling suggests environmental issues and policies tackling climate change are high on the agenda for voters considering who to elect.

The school strike movement has emerged in tandem with other environmental movements worldwide. The British-based direct action group Extinction Rebellion occupied major locations in London for ten days in late April, and their first demand, for the British government to declare a state of “climate emergency,” received approval from parliament on May 1. And in the U.S., the young activists of Sunrise Movement have pushed to transform climate action into a political reality by calling for a Green New Deal, attracting the support of several legislators and 2020 Democratic presidential candidates.

While Thunberg is well-known worldwide, she says it is the strike organizers in each country that she looks up to. “Young people who are in developing countries are sacrificing their education in order to protest against the destruction of their future and world,” she told TIME. “They are the real heroes.” Photos and videos from strikers in the eastern hemisphere started flooding social media in the morning, ranging from Seoul, South Korea to Auckland, New Zealand, and later in the day images of crowds surfaced in European cities such as Berlin and Paris, where organizers say an estimated 23,000 turned out to demonstrate.

Here is a look at some of the places around the world where young people are taking action on May 24.

Greta Thunberg (2ndL behind the banner), the 16-year-old Swedish climate activist, marches during the "Global Strike For Future" movement on a global day of student protests aiming to spark world leaders into action on climate change in Stockholm, Sweden on May 24, 2019.
Jonathan Nackstrand—AFP/Getty Images

Thousands of students and young people took part in Friday’s strike marching through the streets of Stockholm. When TIME travelled with Thunberg from London to her hometown in April, she and other young organizers from the Fridays for Future movement were planning and preparing the actions for May 24.

“I’m just going to continue school striking every Friday until Sweden is aligned with the Paris Agreement,” Thunberg told TIME. “It will not take weeks, it will not take months: It will take years, most likely and unfortunately.”

Greta Thunberg, the 16-year-old Swedish climate activist, is interviewed ahead of the "Global Strike For Future" movement on a global day of student protests aiming to spark world leaders into action on climate change in Stockholm, Sweden on May 24, 2019.
Jonathan Nackstrand—AFP/Getty Images

While there’s an acknowledgement that the strikes have placed the climate crisis back on the agenda in Sweden, for Thunberg it is not enough — her focus is on the global carbon emissions, which continue to rise. However, in the nine months since she first started her strike, her cause has galvanized support from a wide cross section of Swedish society, with grandparents and scientists turning out to support the strike on May 24.

In the Philippines, one of the countries most vulnerable to climate change, organizers say there were at strikes in at least fifteen cities. In recent years, the archipelago of islands has been hit by a series of extreme weather events, such as Typhoon Haiyan (known as Super Typhoon Yolanda in the Philippines) in 2013. Some young survivors of that event, one of the most powerful tropical cyclones ever recorded, felt compelled to take part in strikes on May 24.

“Climate change here is more than about disasters,” Beatrice Tulagan, East Asia Field Organizer for 350.org, told TIME. “We have environmental defenders going up against fossil fuel companies harassed and murdered, women and LGBTQ people attacked and violated in the aftermath of disasters in evacuation centers, communities beside coal plants complaining of health problems and indigenous groups robbed of land.”

Protestors stage a 'Die In' in at the corner of Bourke and Swanston Streets in Melbourne, Australia on May 24, 2019. Protestors including the 'Extinction Rebellion' took to the CBD in order to show the Earth's sixth mass extinction in reaction to Climate Change.
Quinn Rooney—Getty Images

Climate change has been amplified in Australian public conversation in recent weeks, as voters in national elections on May 18 surprisingly re-elected the conservative coalition, which has long resisted calls to cut carbon emissions and coal. Australia has just experienced its hottest summer on record with the country’s farmers facing a punishing drought, and recent research has shown that warming seas are preventing the Great Barrier Reef’s ability to regrow.

As well as strikes in Sydney, around 1000 activists staged a die-in in the heart of Melbourne’s business district just after lunchtime, “acting as physical reminders of Earth’s sixth mass extinction which scientists have attributed to anthropogenic climate change,” organizers Extinction Rebellion Australia told TIME.

Young people also gathered outside Parliament House in Perth, Western Australia, a state where mining accounted for 85% of exports in 2017-2018. Land rights are also a contentious issue in Australia, as Aboriginal and Torres Strait Islander communities have struggled to reclaim colonized land that had historically belonged to them. Currently in Western Australia, Tjiwarl traditional owners of land are part of an ongoing battle in the state’s Supreme Court against the opening of a controversial uranium mine.

Indian students and school children hold placards as they participate in a global strike for urgent climate action in New Delhi on May 24, 2019.
Laurene Becquart—AFP/Getty Images

In Delhi, schoolchildren marched carrying a banner referring to the Intergovernmental Panel on Climate Change (IPCC), the leading international body for the assessment of climate change. In October 2018, the IPCC stated that the impact of a 1.5C increase in global temperatures over pre-industrial levels would “disproportionately affect disadvantaged and vulnerable populations through food insecurity, higher food prices, income losses, lost livelihood opportunities, adverse health impacts, and population displacements”.

For India, which is projected to be the world’s most populous country by 2024, growing inequality and extreme weather events such as heatwaves, floods and cyclones put its people particularly at risk.

Students demonstrate in front of the Bavaria Statue during the climate strikes for the implementation of the Paris World Climate Convention in Bavaria, Munich on May 24, 2019.
Sina Schuldt—picture alliance/Getty Images

With more than 218 strike events listed on the Fridays for Future website, Germany is expected to host more events today than any other country in both big and small cities. Against the backdrop of the European Parliament elections, taking place May 23-26, recent polls have shown that German voters think climate and environment protection are the biggest challenges for the future of the E.U., ahead of other issues such as migration.

Students take part in a strike for the climate crisis in Westminster, London on May 24, 2019.
Aaron Chown—PA Images/Getty Images

While social media and headlines were filled with the resignation of British Prime Minister Theresa May, announced on the morning of May 24, some young people saw it as an opportunity to highlight the climate crisis instead.

Hundreds of school children gathered outside the U.K. Houses of Parliament, chanting and holding the inventive placards that have become hallmarks of the strikes. The scene was replicated at cities across the U.K.

“It doesn’t just stop here, which is why we’re calling on everyone to join a week of action in September, starting with the global general climate strike on the 20th,” a spokesperson for the U.K. Student Climate Network tells TIME. “We won’t be silent while those in the global south suffer the devastating effects of climate breakdown, and young people around the world are seeing their very futures being ripped away.”

Protesters throw an earth-shaped ball during the "Global Strike For Future" demonstration in Stockholm on May 24, 2019.
Jonathan Nackstrand—AFP/Getty Images

Along with Nigeria, Kenya and several other countries across Africa, students and young people in South Africa planned actions on May 24 and 25 to coincide with Africa Day, commemorated on May 25. As part of a continent-wide campaign #AfrikaVuka, organizers are demanding that local leaders “commit to building a fossil free Africa that puts people and justice before profits.” Organizers say that in South Africa, a letter calling for a national ban on fracking will be handed over to recently re-elected President Cyril Ramaphosa, and in Senegal, thousands of citizens are calling for the end of a controversial coal plant and stronger climate leadership from the government.

Support for the climate strikes

Adults have backed the school strike movement, with several prominent thinkers and activists including Naomi Klein, Bill McKibben and Margaret Atwood supporting the movement’s next event, a global strike on 20 September, saying that “disrupting our normal lives is the only way to secure our future.” Leading scientists and academics had also previously signed an open letter in support of Greta Thunberg and the school strike movement in February.

While Thunberg may have started her strike alone, May 24 proved that people all around the world are in solidarity with her and willing to spread the message. “I’m not planning to stop this movement, and I don’t think anyone else is either,” she told TIME. “We have to start acting now, even if we don’t have all the solutions.” 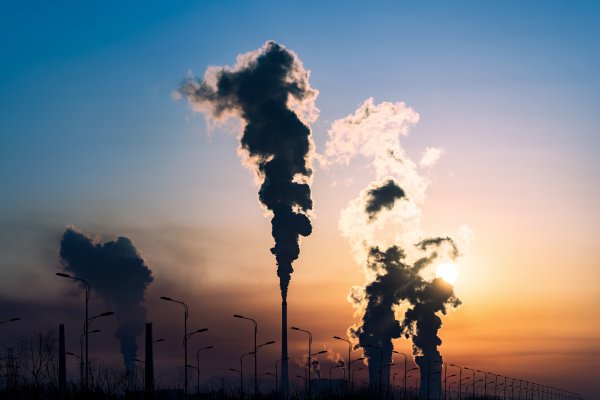 Atmospheric CO2 at Levels Unseen for 3 Million Years
Next Up: Editor's Pick