The Quick Read About… the 5G War Is Upon Us

The U.K. headquarters of Huawei in Reading is seen on June 12, 2018.
Steve Parsons—AP
By Ian Bremmer

Last week, the US government placed China’s state-champion Huawei on the Commerce Department’s Entity List, banning the tech company from buying critical parts it needs from US producers. For all the focus on the current trade war between the US and China, it’s this brewing tech war that has the potential to reshape the world order. And it’s starting to with this Huawei development.

This is a fight over who will build and lead innovation for the next generation of internet and telecommunications technology, which is called 5G. 1G was the tech that enabled us to make wireless phone calls; 2G brought texting capabilities; 3G delivered web browsing to the phone-wielding masses; 4G made wireless video-streaming a reality, and through its constant connection to GPS satellites enabled the rise of companies like Uber. We are currently living in a 4G world, but the transition to 5G is just getting started and will accelerate over the next couple of years. 5G, however, will be different than previous mobile upgrades; for one thing, data will move about 100 times faster. But it will also handle far more data, with far lower lag times, than ever before. It is really about machine-to-machine communications. Think billions of connected gadgets—commonly referred to as “the internet of things,” which means everything from washing machines to self-driving cars to entire “smart cities.”

There’s no real reason that 5G infrastructure can’t be built with both Chinese and Western hardware, as our current 4G network currently is (not so fun fact: Huawei already provides much of the world’s network hardware, outstripping its Western counterparts Ericsson and Nokia). But the Trump administration has argued that allowing Huawei equipment into the guts of global 5G networks could allow Beijing to access the streams of data that will be passing through the company’s hardware, leaving American companies and citizens susceptible to spying. The other argument that the US administration is making is that building 5G networks with Huawei networking gear equipment could leave them vulnerable to an infrastructure attack should the US and China ever actually go to war—imagine if China responds to a volley of US missiles by bringing down the US electrical grid.

Messaging aside, the decision to place Huawei on the Commerce Department’s entity list as a national security threat is a seminal moment—the US government is effectively saying that where a piece of technology hardware comes from is the deciding factor in determining it’s safe to be used in US networks or those of its allies. For a country like the US whose economic strength was built upon the globalization of supply chains and maximizing efficiencies (the iPhone is “Designed by Apple in California” but “Assembled in China”), this is a sea change. And the fact that it is trying to get other Western countries—particularly in Europe—to join them has the potential to fundamentally reshape the global marketplace and how companies do business around the world.

The Commerce Department this week issued a 90-day exemption to US companies to continue doing limited business with Huawei, but they’re targeted waivers meant to support continuing operations for existing customers. Huawei will struggle to operate like this even if the waivers continue to be renewed. So far, the US hasn’t seen much of a response from Beijing—while China’s political leaders are up in arms about the Huawei developments, they will likely keep quiet publicly and work with Huawei to explore ways to negotiate with the US Commerce Department a remedy to address the charges against the company. This could include a major fine in the $1 billion range and disciplining of executives, much like they did last year with China’s other state-backed tech giant ZTE.

But Huawei faces a tough road ahead, and it’s way more important for the future of the Chinese economy than ZTE—that makes it an appealing target for China hawks in the US to continue pushing on. And because Trump’s reversal on ZTE makes him open to charges of being “soft” when it comes to China, a particularly devastating critique in an election year, he’s going to feel pressure to keep the heat on Huawei.

Trump prides himself as a dealmaker and has repeatedly referenced his good relations with Chinese president Xi Jinping so it’s possible that Trump takes steps to soften US measures against Huawei if he feels that’s what’s necessary for him to strike a trade deal with Xi and a political win for himself. Yet more reason to pay attention to the Trump-Xi meeting at the upcoming G20 in Japan.

5G is critical, but it’s not the only tech war the US and China are gearing up for. Check out this piece I wrote with Wired editor-in-chief Nick Thompson a few months ago unpacking the broader AI war to come.

That China is trying to run out the clock on a Donald Trump presidency, much the same way the Iranians are. That’s not going to work—unlike the fight over the Iran nuclear deal with clear political sides for and against, there is broad bipartisan wariness of China in Washington, and no guarantee that whoever follows Trump (whether in 2 years or 6) will revert to the status quo that was in place before Trump took office. So waiting out Trump is not really an option for China’s leadership.

There’s one lesson China has learned over the last two years of sparring with the US over tech and trade—it’s much too vulnerable to a sudden hardening of US politics. It will take some time, but you better believe that China is already making plans to ensure it never gets caught in a situation like this again. What the Americans have learned from all this is TBD. 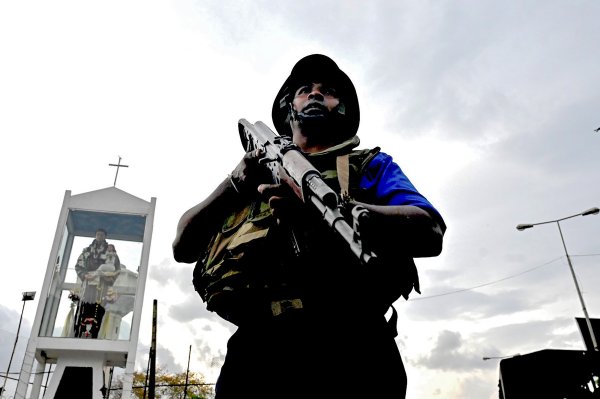 A State of Disorientation: Dispatch from Sri Lanka after the Easter Bombings
Next Up: Editor's Pick