(Bloomberg) — The National Rifle Association, riven by political turmoil and accusations of fiscal mismanagement, has sued its longtime public relations firm, accusing it of engineering a failed “coup” attempt by leaking damaging information to undermine the NRA’s leadership.

The PR firm, Ackerman McQueen Inc. fired back with a breach-of-contract countersuit, claiming the NRA is just trying to get out of its service agreement with the firm.

The NRA accused Ackerman McQueen in the lawsuit Wednesday of trying to foment the ouster of its Chief Executive Officer Wayne LaPierre by giving the news media details about his spending on items including expensive clothing and lavish foreign travel.

Those allegations were raised by NRA President Oliver North, who said he’d created a committee to examine financial wrongdoing at the group and urged LaPierre to resign. LaPierre accused North of trying to extort him, and their battle came to a head with North’s ouster at last month’s NRA convention in Indianapolis.

In a “remarkable” breach of trust motivated by a desire to avoid scrutiny of its own activities, Ackerman McQueen “undertook a campaign to tarnish and ultimately destroy the public image of the NRA and its senior leadership,” according to the complaint filed in state court in Alexandria, Virginia.

Ackerman McQueen said it’s “a sad day for NRA members that their leadership is more focused on attacking partners than fighting for freedom.” In a statement, the firm called the lawsuit “another reckless attempt to scapegoat Ackerman McQueen for the NRA’s own breakdown in governance, compliance and leadership.”

Ackerman McQueen claimed in its lawsuit Thursday that the NRA misrepresented crucial facts about its relationship with North and his employment. The NRA is trying to transfer Ackerman McQueen’s business without paying severance, as is required under the contract, according to the lawsuit. The firm seeks $50 million in damages.

The relationship between Ackerman McQueen and the NRA has come under scrutiny in recent months, amid reports that some of NRA’s top officials were also receiving payments or perks from the advertising and PR firm. New York Attorney General Letitia James has confirmed that she’s investigating the gun-lobby group.

The lawsuit, which was reported earlier by the Daily Beast, is the second one filed by the NRA in recent weeks against Ackerman McQueen. The firm had worked with the NRA since the 1980s and helped plan its public relations and strategic marketing as well as running NRATV.

The NRA has said that Ackerman McQueen employed and paid North as he also worked as the NRA president, a ceremonial position. In the first suit, the NRA claimed that the company and its subsidiary, Mercury Group Inc., was paid almost $40 million in 2017 yet withheld various records, including about how North was paid.

According to the latest complaint, Ackerman McQueen resisted the NRA’s efforts to get information about its own activities. The firm sought to “ultimately wrest control of the NRA by fomenting a (failed) executive coup,” according to the complaint. It accused the NRA of breach of contract and breach of fiduciary duty, and seeks $40 million in damages.

Even as Ackerman McQueen withheld important documents from the NRA, it “readily shared snippets of confidential and proprietary materials with hostile third parties, including the news media — in a series of sordid, out-of-control ‘leaks’ engineered by AMc to harm its client,” according to the complaint.

It alleges these efforts were an attempt “to derail inquiries by the NRA into AMc’s business and accounting practices.”

In its counterclaim, Ackerman McQueen disputes those statements. It says the NRA sent a team of auditors to the firm’s offices in Oklahoma City in February for a nine-day review of its records. That followed two other briefer audits last year, according to the filing. At the end of the review, the auditors told Ackerman McQueen it had provided all the documents requested and no more were needed, according to the filing.

The counterclaim is heavily redacted, so it’s difficult to determine the full nature of the firm’s response to the lawsuit.

Amid the political turmoil, the NRA released a statement Wednesday from President Carolyn Meadows and several of her predecessors.

“We are not inclined to further discuss unfounded attacks on our organization, political infighting or a ‘weakened’ NRA,” she said. “Our adversaries will not divide us and any further discussion about the so-called ‘demise of the NRA’ is only meant to distract us from our mission,” which is to stand as the “last line of defense against a campaign to take down the Second Amendment.” 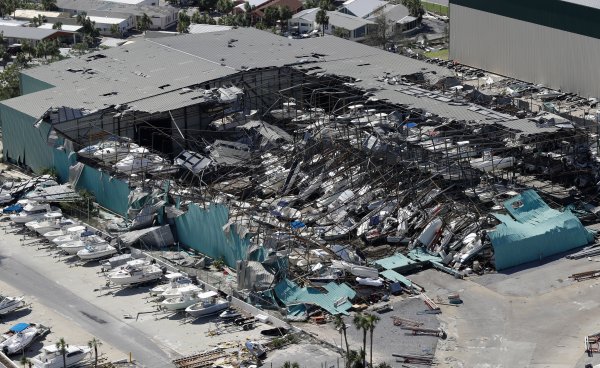 Two to Four Major Hurricanes Forecasted for 2019, NOAA Says
Next Up: Editor's Pick