How Abortion Became a Top Issue in the 2020 Democratic Primary

Among the hundreds who gathered in front of the Supreme Court to protest for abortion rights on Tuesday were roughly a half-dozen candidates for the Democratic presidential nomination.

For Ryan, who switched from being anti-abortion to pro-choice in an op-ed in 2015, the protests in D.C. and other cities showed how pivotal abortion rights may turn out to be in the 2020 election.

“[Abortion] is definitely going to be a part of the conversation, no question, as it should be,” he told TIME as he stood just off the stairs leading up to the Supreme Court. “I hope what it does is energizes a lot of women. I think there’s going to be a lot of suburban women who are going to look to us, and to the Democrats hopefully, as willing to join because of this issue, when otherwise maybe they didn’t.”

Abortion is also shaping up to be a clear campaign issue in the Democratic primary. Although the candidates largely agree — they generally support abortion rights and oppose the recent state laws — they differ on how much they stress its importance, whether they’ve put forward specific plans to protect abortion rights and their record in past votes.

Among those leading the conversation are some of the female candidates: New York Sen. Kirsten Gillibrand took a trip to the Georgia capitol last week to protest its anti-abortion legislation and vowed to only nominate judges who will uphold Roe v. Wade, and Massachusetts Sen. Elizabeth Warren rolled out an extensive plan to ensure access to reproductive health care.

But this week it became clear that candidates were feeling the pressure to give more detail. At a CNN town hall on Tuesday night, former Texas Rep. Beto O’Rourke laid out his plan for reproductive rights; the following morning, New Jersey Sen. Cory Booker put forward his plan, which would include creating a White House Office of Reproductive Freedom.

Notably, most candidates have also now expressed support for codifying the protections of Roe v. Wade in a federal law.

“I think these candidates will compete to mobilize women around this issue,” Illinois Rep. Jan Schakowsky told TIME. “They’re going to see it as a way to really appeal to women voters. The majority of the voters each cycle are women, and I think that they’re absolutely going to compete on this issue.”

Strategists agree that the eventual nominee will be supportive of abortion rights.

“At the end of the day, there’s going to be very little space between them on this issue,” a Democratic strategist told TIME, but noted that candidates’ plans to expand access to abortion is indeed something that they’re competing on. “I think it’s a great conversation that we’re having on the Democratic side.”

The issue came to a boiling point last week, when Alabama’s governor signed a bill that would effectively outlaw abortion in the state, without exceptions for rape or incest. It’s one of the most extreme anti-abortion bills in the country, but other states have also passed severely restrictive measures, like Georgia’s so-called heartbeat bill, which bans abortion once cardiac activity can be detected, typically around six weeks.

Both anti-abortion advocates and abortion-rights supporters say that these laws will help kickstart the process of getting Roe v. Wade overturned in the Supreme Court.

“Roe is at stake here,” said Stephanie Schriock, the president of EMILY’s List, an organization that works to elect women who support abortion rights. “This is a crisis for women and families in this country who need to have the ability to make the full range of choices in their lives, and to have access to safe abortion. And so this is just a critical moment.”

Democrats say the issue may play a larger role in Senate, House and state races.

“The answer to every question is the same: mobilize, mobilize, mobilize. Our whole country changed when women decided to march,” Speaker of the House Nancy Pelosi told the audience at the Center for American Progress’s Ideas conference on Wednesday. “We don’t agonize, we organize, and we cannot let this happen to the families of America.”

Still, there are some Democrats who aren’t supportive of abortion rights, though their numbers are shrinking.

Illinois Rep. Dan Lipinski, in particular, has been a lightning rod for criticism from the left for his anti-abortion stance. Illinois Rep. Cheri Bustos, the chair of the Democratic Congressional Campaign Committee, had been scheduled to headline a fundraiser for him, a decision she faced backlash for. In a sign of the times, the New York Times reported Wednesday that Bustos would no longer be appearing at the event. 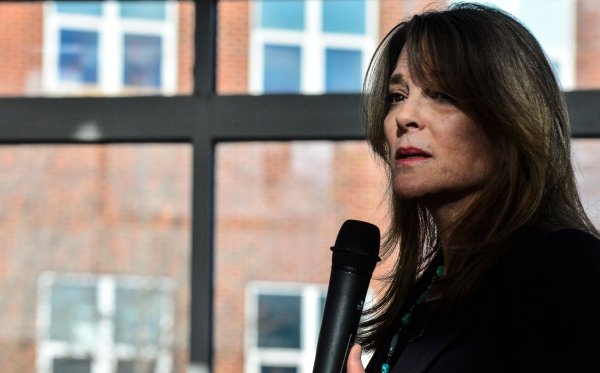 Williamson Preaches a Message of Love in the Democratic Primary
Next Up: Editor's Pick