Adèle Haenel and Noémie Merlant in 'Portrait of a Lady on Fire.'
Courtesy of NEON
By Stephanie Zacharek

Portrait of a Lady on Fire, a romance set in late 18th century France and directed by French filmmaker Céline Sciamma, works on all sorts of levels without making you hyper-aware of any of them: It’s a tender but complex love story, a slice of social commentary about the kinds of life and work opportunities historically available to women, a gorgeously shot period piece that’s heaven to look at. The picture is thoughtful and intense, but you don’t walk away from it thinking you’ve just seen a “message movie.” It’s a great example of how a well-told story, with vivid characters, can seep right into your bones and keep you thinking for days afterward—and the pleasure felt while watching it isn’t negligible either.

A painter, Marianne (Noémi Merlant), arrives on the majestic, heartless coast of Brittany to produce a portrait of a young woman, Héloïse (Adèle Hanel), who is betrothed to a suitor in Italy she’s never met. Héloïse’s mother, a French countess (played by Valeria Golina), has arranged the marriage, and the portrait is necessary to assure the future husband of the charms of his wife-to-be. Upon her arrival, Marianne learns that a previous painter has failed in his mission, driven away by Héloïse’s—well, at that point, we don’t quite know it is, but we’re about to find out.

The countess instructs Marianne to pose as a companion to Héloïse, to observe her as closely as possible and then paint her from memory, in secret; Héloïse is not to know what Marianne’s true mission is until the finished portrait is revealed. The two begin their tentative friendship by going out walking, Héloïse wrapped in a swirling patterned cloak, Marianne in a practical wool coat, possibly a man’s. And right away Marianne begins to see how Héloïse must have broken the other painter: The social niceties that smooth life along from day-to-day don’t concern her; she never obliges with a smile. Even beyond that, she’s so intensely cryptic and self-possessed that Marianne can’t help wanting to know more. It doesn’t hurt that her beauty is of a piece with the landscape around them, a place roaring with silent secrets. Portrait of a Lady on Fire is a film with two great faces, which could almost be enough right here: Merlant, with her bold profile and assertive gaze, and Hanel, who has the gift of revealing emotions even as she seems to be concealing them, give the movie much of its crackling energy.

What Marianne and Héloïse find in one another speaks volumes about the constraints of the larger world around them. And if the story is, in a sense, about freedom and self-determination, its most striking scene is the one in which Héloïse, an obedient daughter who understands the limited opportunities open to her, defies Marianne, who treats her own autonomy as a privilege that all women should grab for themselves. Sciamma doesn’t apply modern standards to the women of the past; to do so is to disrespect them. Instead, she gives us a sense of the texture of their lives: A group of local women gather around an almost ritualistic bonfire, easing their way into an a capella song whose harmonies build gradually, ultimately glowing as boldly as the flames do. There’s an unwanted pregnancy, and a brief exploration of the contemporary modes of terminating it, most of them rather frightening. But there are no extreme horrors here. Portrait of a Lady on Fire makes a distinction between grim realism and an understanding of reality; Sciamma is much more interested in the latter. This radiantly sensual film ends on the perfect note, a rush of emotional intensity that’s wrapped in a secret, as hushed as the rustle of silk.

Portrait of a Lady on Fire, which won for best screenplay at the Cannes Film Festival in May, is getting a small theatrical release and will be available for streaming on Hulu thereafter. Both intimate and expansive, it deserves to be seen on the big screen. But in a pinch, one approximately the size and shape of an 18th-century oil portrait will do. 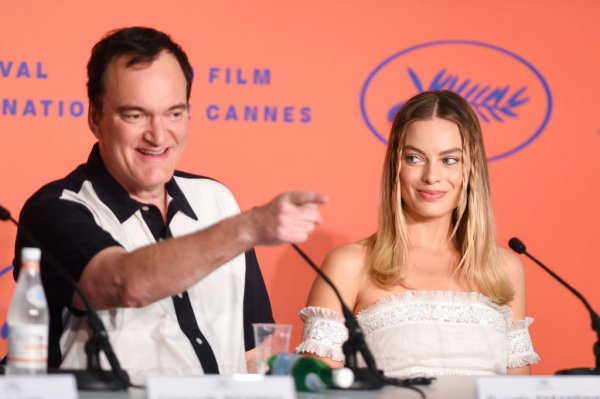 Quentin Tarantino Did Not Like This Question About Why Margot Robbie Didn't Have Many Speaking Lines in His Movie
Next Up: Editor's Pick