U.S. President Donald J. Trump speaks during a "MAGA" rally at the Williamsport Regional Airport on May 20, 2019 in Montoursville, Pennsylvania.
Mark Makela—Getty Images
Ideas
By James Stavridis
Admiral Stavridis (Ret.) was the 16th Supreme Allied Commander at NATO and is an Operating Executive at The Carlyle Group. His latest book is Sailing True North: Ten Admirals and the Voyage of Character

In 2012, I was the Supreme Allied Commander at NATO, in overall command of NATO operational forces worldwide. My trusted subordinate commander of the International Security Force Afghanistan was a superb U.S. Marine Corps General and a Naval Academy classmate of mine, John Allen. He called me late in the year to inform me that a group of U.S. Marines had been videotaped and photographed that summer by their fellow Marines urinating on the corpses of Taliban combatants who had been killed in a firefight in Afghanistan. John was deeply, justifiably upset. He outlined the difficulties ahead — particularly the real additional danger to our troops — caused by the enormous backlash that we both knew would come in country, once the world knew what these Americans had done. I remember the anguish in his voice.

Those Marines were subsequently charged and punished by military courts for, or themselves pled guilty to, obvious violations of our code of conduct. Some were demoted a rank or, in at least one case, discharged — albeit honorably. The fellow Marines who conducted the disciplinary activity were sober, thoughtful and fully knowledgeable of the stress of combat operations. (One Marine’s conviction was overturned in 2017, due to meddling by an enraged four-star general who oversaw the investigation into this case, though even then, the general took action to attempt to, he wrote, “protect the institutional integrity of the military justice process.” This was correctly construed by the military appellate system as “undue command influence” — demonstrating the military judicial system is indeed self-policing.)

There was not a shred of “political correctness” in the convictions. Though some judges could not inflict harsher punishment due to plea deals, the Marines’ actions represented a real failure in our overall command discipline, disgraced the Marine Corps and put their fellow Marines in more danger on the battlefield. It was a low point in our campaign in Afghanistan, where at that moment we had 150,000 brave U.S. and Alliance troops engaged in a difficult and frustrating fight.

But according to the New York Times, it appears that President Trump is considering pardoning those men, as well as other military members credibly charged with a variety of crimes, including murdering an enemy captive or killing unarmed civilians. (The President is also reportedly considering pardoning a security contractor twice convicted by a federal court.) All of these actions are gross violations of the laws of war and the U.S. code of military conduct. They are extreme ethical and moral failures.

Some of the Marines who desecrated the corpses accounted their actions to the stress of war. Yet while the impulse to act with leniency toward the servicemen who, in the crucible of combat, fall short of our expectations for acceptable behavior is understandable — especially to some sympathetic civilians — actually doing so leads us in the wrong direction. These men are not heroes. Far from it.

I Served with the Military Leaders Shaping America’s North Korea Plan. Here’s What They’ll Do Next

Each of the cases is unique. The circumstances, motivations, outcomes and punishments all differ. But they share one crucial element: the military members went through, or still face, the military judicial system, which includes a strong presumption of innocence by fellow military members; a very high bar for conviction; a set of judges, prosecutors and defense teams composed of military personnel, most with real combat experience themselves; and a fully engaged appellate system that likewise was composed of military judges. While there may be a very atypical case wherein a Presidential pardon could right an obvious wrong, such a situation is extremely rare — the punishments meted out take fully into account the circumstances. At a minimum, the President should let the full course of military justice run its course through conviction, potential incarceration and the appellate process — before even considering such an action.

For the Commander-in-Chief to reach into the military system and provide a pardon, especially in a preemptive way before a trial and appeal process, is a mistake. It will undermine our own standards, as junior enlisted personnel try to understand a pardon for doing something we constantly train to avoid. It strengthens enemy propaganda, as they will correctly say that we do not hold ourselves accountable for our own standards. It undercuts our relations with allies who have strong systems in place to prevent these kinds of actions. And it spurs our enemies on to even more barbaric behavior as the battlefield descends into moral chaos on both sides of the line of combat. This kind of pardon disrespects every single one of our soldiers, sailors, airmen and Marines who follow the strict standards of the Code of Conduct. They do not abuse captives who have surrendered, use torture to interrogate, cause needless casualties to civilians through collateral damage or desecrate corpses.

For an example of a serviceman who truly is a hero and faced similar circumstances but made the courageous and honorable decision in that combat crucible, consider the story of SEAL Lieutenant Michael Murphy. On a mission in Afghanistan in 2008, his four-man SEAL patrol stumbled across Afghan goat herders. The squad considered killing them to preserve operational security. As the team leader, the decision was Murphy’s to make, and he released them, knowing that execution of civilians would have been a violation of military law. Later, his team was ambushed and three of them died, including Lieutenant Murphy. He subsequently received the Congressional Medal of Honor for his actions in the final firefight, and today his name graces the bow of the Arleigh Burke-class destroyer named in his honor. The man who survived the mission, Navy Seal Marcus Luttrell, tells the story in his memoir Lone Survivor, illuminating the hard choices on the battlefield and the way in which Michael lived up to our standards fully.

When he was a boy growing up, Michael Murphy’s nickname was “the protector,” because he tried to shield the weak and always take the moral and ethical path forward. That is the kind of young leader we cherish in the U.S. military, and Michael’s actions in combat represent the vast majority of America’s extraordinary armed forces. President Trump would do well to consider the actions of leaders like him as he considers wielding the enormous powers of the presidency in pardoning those at the other end of the moral spectrum. He should tread carefully indeed.

TIME Ideas hosts the world's leading voices, providing commentary on events in news, society, and culture. We welcome outside contributions. Opinions expressed do not necessarily reflect the views of TIME editors.
Each product we feature has been independently selected and reviewed by our editorial team. If you make a purchase using the links included, we may earn commission. 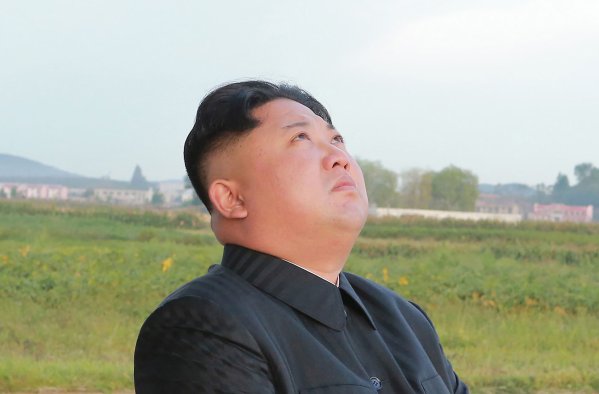 I Served with the Military Leaders Shaping America’s North Korea Plan. Here’s What They’ll Do Next
EDIT POST