In the War for Europe’s Soul, Holland’s Green Crusader Jesse Klaver Is Fighting for the Future

Klaver, photographed in the Hague in March 2017, helped push the Dutch parliament to adopt one of the world’s toughest climate bills in 2018.
Michael Kooren—Reuters
By Charlotte McDonald-Gibson

Spend a few hours with Jesse Klaver, and you realize he is a little different from other politicians in the Netherlands, a country where most people pride themselves on being modest and unpretentious.

First, there is the unblinking self-confidence with which he will look you in the eye and tell you he wants to be Prime Minister one day. Then there are his exuberant political rallies, like the one TIME joined in Amsterdam on a windy weekday evening in March. Klaver enters through the crowd to pumping music and rhythmic clapping, like a boxer approaching the ring.

The 33-year-old leader of the GroenLinks (Green Left) party made a global splash after his party leapt from four to 14 seats in the 2017 general elections, and his telegenic looks and resemblance to a certain Canadian Prime Minister earned him the nickname “the Justin Trudeau of the Netherlands.”

Speaking in a backstage dressing room over a second glass of green tea—“The party drink!” he jokes—Klaver says his approach simply reflects a shift in society, with young people becoming increasingly outspoken and politically active, especially on issues like climate change that affect their future. “A new generation is standing up in the Netherlands,” he says. “Young people are going on the streets for demonstrations. Something is happening, and people are standing up and saying, ‘My generation has to fix this.’”

Klaver is one of a band of youthful leaders around the world fighting back against the far-right populist and nationalist trend by tapping into a new political activism and offering a radical vision for the future. Membership in his Green Left party has surged by around 25% since the 2017 vote. Next up are the European Parliament elections on May 23, where environment-focused parties are hoping to challenge the dominant narrative of a right-wing, Euroskeptic surge. In Germany, polls suggest the Greens party is now the country’s second largest; in the next Dutch Senate, the Green Left will be the joint third largest.

It’s a fight symbolic of a broader tug-of-war between ideologies, Klaver says. “The big question is who is going to come next? The new progressives—the Greens in Europe and the socialists in the U.S.? Or the populists? This is the fight we have to fight, and we are in a winning mood.”

Klaver’s rally in Amsterdam is aimed at drumming up support for the E.U. elections, which will determine the makeup of the legislative body that oversees pan-European policies. A broad section of society is present, from teenagers to retirees. Only one person sports bare feet and dreadlocks, the outdated archetype of the Green voter.

During the Q&A session, a 15-year-old boy asks Klaver how he can fight for change: his school did not let him take part in the Europe-wide climate-change strikes led by Swedish activist Greta Thunberg, he says, and he is too young to vote. After some gentle ribbing about how asking permission negates the point of a strike, the Green leader reminisces about his own youthful activism.

Civil disobedience movements like Extinction Rebellion, which caused gridlock in parts of central London last month, have divided people over whether they help or hinder the environmental cause. But Klaver is a passionate believer in getting out on the street to stand up for what you believe in, and has been attending protests since he was a child.

It was his maternal grandfather, a passionate environmentalist, who introduced the young Klaver to activism, taking him along on marches. “I was raised with a lot of social awareness,” he says.

A photo of him alongside his grandfather on a march shows a serious-looking teenager, and the confident Klaver of today retains some of the charm of a political nerd who has somehow been taken by surprise by the power of their own charisma.

While he has the power to whip up an adoring crowd, Klaver dismisses the Trudeau comparisons with a joke (“I’m a bit jealous of his biceps”). He is more interested in speaking about politicians south of the Canadian border. He is an admirer of Senator Bernie Sanders and senses a kindred spirit in Democratic Congresswoman Alexandria Ocasio-Cortez. “The way she is talking about climate is very refreshing in the United States,” he says, referring to her Green New Deal proposals on renewable energy and a smart grid chiming with his own ambitions for a carbon tax and an E.U.-wide renewables grid.

In many ways, Klaver has more in common with Ocasio-Cortez and other progressive Democrats than many of his own Green counterparts in Europe. Klaver has taken GroenLinks further toward the radical left than most other Green parties in Europe, and his policy platform goes well beyond traditional environmentalism. Away from climate change, much of his rhetoric is against large banks, tax-dodging corporations, unfettered privatization and the perils of neo-liberalism.

Asked about the European politicians he feels most affinity with, he name-checks Greek Prime Minister Alexis Tsipras of the far-left Syriza party and the ideologically similar Unidas Podemos party in Spain. “We are a Green party, but we are trying to revive left-wing politics,” Klaver says. “We are proud to be green, and we are proud to be on the left. And we are not saying sorry for our ideals.”

He believes that other Green parties in Europe should do the same if they want to capitalize on the fall of the traditional left, which has lost many of its working-class voters to populist and nationalist forces. “Those [populist] voters were voting for social democrat parties in the 1990s,” Klaver explains. “So they were not born as right-wing voters—they were born as people, and they are looking for parties that will fight for them.”

Dutch politics has long had a strong populist element, with Geert Wilders of the Freedom Party consistently grabbing headlines with his strident anti-Islam rhetoric. In March’s provincial elections, a new populist party—Forum for Democracy, led by Thierry Baudet—got the largest share of the vote. Baudet, 36, occupies much of the same populist, anti-immigrant ground as Wilders, but his flamboyant style and knack for self-promotion have catapulted him ahead of his ideological ally. For some, Klaver and Baudet are mirror images on opposite ends of the political spectrum: young, charismatic and often too eager to portray complex politics in black-and-white terms.

Klaver is, however, convinced he can win over some of the far-right voters with a combination of left-wing socioeconomic policies and the simple act of hearing their voices. “Not by preaching, but by listening,” he explains. “A lot of progressives were preaching ‘No, you are wrong, you are not seeing it right.’ [Instead], you say, ‘Please tell me your story.’”

Progressive European media has gone gaga for the man the Guardian nicknamed “the Jessiah.” But political analysts in Holland question whether the Jesse juggernaut can propel him all the way to the Prime Minister’s office currently held by Mark Rutte, given how much compromise would be required of the party to work in the complicated, multiparty coalitions that define Dutch politics.

But if Klaver has any doubts, he is keeping them to himself. Like other idealistic young politicians of his generation, he believes the world will emerge a better place from today’s turbulent times. “Things are changing, and it is up to us to make the good change,” he tells me. “There is so much fuel in society. We have to just light the fire.” 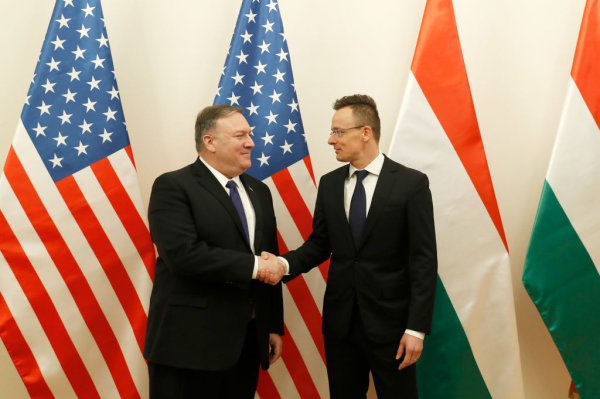 Hungary's Far-Right Government Has Been Getting a Boost from President Trump Ahead of E.U. Elections
Next Up: Editor's Pick