A State of Disorientation: Dispatch from Sri Lanka after the Easter Bombings

A Sri Lankan soldier stands guard near a car explosion after the police tried to defuse a bomb near St. Anthony's Shrine in Colombo on April 22, 2019, a day after the series of bomb blasts targeting churches and luxury hotels in Sri Lanka.
JEWEL SAMAD—AFP/Getty Images
Ideas
By Anuk Arudpragasam
Anuk Arudpragasam is a novelist from Colombo and is the author of The Story of a Brief Marriage.

In Colombo, as though there is war once more, the ominous presence of heavily armed soldiers is everywhere. Ever since the Easter Sunday bombings, checkpoints have been posted on all the main roads, as well as outside churches and mosques. There are rumors every day of further possible bombings, of newly discovered perpetrators and accomplices still on the run, and a State of Emergency has been declared in the country. The same State of Emergency that during the civil war allowed the government to detain, interrogate, and torture at will. There are recurring curfews and bans on social media, and even when these are lifted the streets are mostly empty by late evening. People avoid congregating in public spaces, especially Muslims, whose fears that the bombings will be used as a pretext for yet another series of violent attacks on their community are already materializing.

There is something almost unbearable in this state of disorientation, something more than just fear for one’s life and safety. Life as usual has been interrupted, the routines and rhythms that anchor people to their environments suspended. People have been compelled to stop, look up from the daydream of ordinary life, and take stock of themselves and the world in which they live, a process that most people in most places, Sri Lanka and elsewhere, would rather avoid. What would drive nine mostly middle-class Sri Lankan Muslims to such acts of violence and self-destruction? And why target Christians, of all people, who in this country have hurt nobody for the sake of their beliefs? In the newspapers and on the TV, in buses and private vehicles, in offices, shops, and living rooms, everywhere there is a palpable anxiety to find answers, to obtain an explanation that will allow for a return to the soothing indifference of ordinary life.

In response to similar attacks that have occurred in the Western world, a readymade script has long been prepared for this purpose. The main protagonists of this script, of course, are radical Islamists, terrorists with ruthless disregard for human life, people who have no history except the history of their radicalization, and who will stop at nothing to destroy the peace. It is a script that is easy to use, one that allows complex histories to be simply written and simply processed, and it is this script that the international media have almost universally resorted to in covering the recent events in Sri Lanka.

It is worth asking why the Easter Sunday bombings have given the country unprecedented attention in the Western world. There already seems to have been more coverage of the bombings than there was of the massacres of Tamil civilians during the last phase of the civil war that ended in 2009, when according to the UN up to 40,000 people were killed at the hands of the Sinhala-Buddhist state. The accusations of genocide and war crimes made by Tamils, of little concern to the political interests of Europe and the United States, were relayed quietly and with little overt sympathy in the West. The Easter Sunday bombings, on the other hand, offer the Western press an ideological opportunity that has been taken up with aplomb by newscasters and pundits who speak with practiced authority on the subject, their eyebrows gravely furrowed and their voices filled with concern.

Whereas jihadist attacks in Europe and the US are obviously connected with the long and brutal history of Western imperialism in the Middle East, the attacks on the overwhelmingly peaceful Christian communities in Sri Lanka cannot easily be explained along such lines. The bombings have therefore allowed commentators in the West to focus solely on the anti-human nature of radical Islam, to portray it as an ideology which, instead of being a misguided political response to a history of oppression, comes out of a free-floating, ahistorical, unbridled will to death. The narrative is useful, since it allows the West to view itself too as the blameless victim of an intrinsically evil ideology, as though its own complicity can now be disregarded when considering the jihadist attacks that have taken place on its own soil. How can the West’s continued military and political interference with affairs in the Middle East be questioned, after all, when the ideology under consideration is one of pure and simple evil? Much the same might be said of the Indian media’s enthusiastic coverage of the bombings in Sri Lanka, too, since actions committed by the Indian military in Kashmir have given rise to a similar obsession with Islamic radicalism there.

The Sri Lankan government and media, by and large, has been eager to follow this global script, as though nothing but the abstract evil of radical Islam could be responsible for the Easter Sunday bombings. It has gone so far as to follow various European countries in banning the burqa, despite the fact that no burqa had any role in the bombings or the deaths. As conscientious Sri Lankans know, however, the island has its own long and ugly history of anti-Muslim sentiment. Local stereotypes and discriminations against Sri Lankan Muslims abound – often portrayed as unscrupulous or untrustworthy, the Sinhala and Tamil middle-classes are often reluctant to rent their homes even to well-off members of the community. These prejudices have little to do with Islamic beliefs per se, and much more to do with local histories: with the complex caste-related undertones of anti-Muslim prejudice, with economic resentment against the success of Muslim businesses, and with shifting political alliances and power configurations between the Muslim, Sinhala, and Tamil communities during and after the war.

Different political forces on the island are well practiced in exploiting these biases for their own ends. The Tamil Tigers notably did so when they forcibly expelled tens of thousands of Muslims from Jaffna in 1990, on the pretext that the Muslim community was betraying the separatist cause. In the postwar years it has been the forces of Sinhala Buddhist supremacy that have systematically targeted Muslims on the island, in the campaigns for ending Halal certification, in the agitations for the boycott of Muslim-owned businesses, and above all in the anti-Muslim riots of 2014 and 2018 that resulted in the looting and burning of hundreds of Muslim shops and homes. The outbreaks of violence against the Muslim community that have followed the Easter Sunday bombings will no doubt be explained away as anger in response to the actions of the extremists, but the truth is that anti-Muslim violence in Sri Lanka has preceded the recent bombings by several years, and anti-Muslim prejudice by far longer.

It is important that these acts of anti-Muslim hatred, largely ignored or condoned by the country’s majority Buddhist population, have come on the heels of the massacre of Tamil civilians during the end of the war, as if with the complete subjugation of one minority the country has needed to find another minority against which its aggression can be expressed. The two events cannot be compared, but they cannot be viewed in isolation. They point to a majority community that continually projects its fears, shames, and insecurities onto various racialized others, a majority that is unable to take responsibility for its own past and its own destiny, which is in constant need of an externalized object of resentment.

The fact that the bombings were directed primarily against Christians rather than Buddhists will be taken as evidence by many Sri Lankans that the bombings have their source in Jihadist ideology alone. Whatever motivations are ultimately attributed to the perpetrators, though, Sri Lanka’s postwar history makes it clear that the influence of radical Islamic organizations like ISIS can be at most a proximate cause. Such organizations may have influenced the choice of target and they may have even supplied material and technical resources, but such ideologies can only be appealing – even if only to a very small minority of Muslims – if they address deep and systematic wounds that already exist.

The palpable sense of anxiety in Sri Lanka in the immediate aftermath of the attacks, the urgently felt need to find a more global, self-exonerating narrative, comes precisely from the country’s unwillingness to see how it has inflicted such wounds on its minorities. Without such a narrative the horror of the recent attacks threatens to turn the gaze of Sri Lankan society inwards, towards its own deeply engrained racism and unexamined history of violence, towards the various senses of inadequacy and insecurity at their source. With the help of global Islamophobia, a misleading but viable script has now presented itself, allowing the country’s majority population to reassure itself of its image of self and nation, to return to ordinary life (and increasingly ordinary anti-Muslim violence) with the guarantee that these cherished images will not be disturbed. It is easier sometimes to follow a script, after all, even when it comes at the cost of peace. 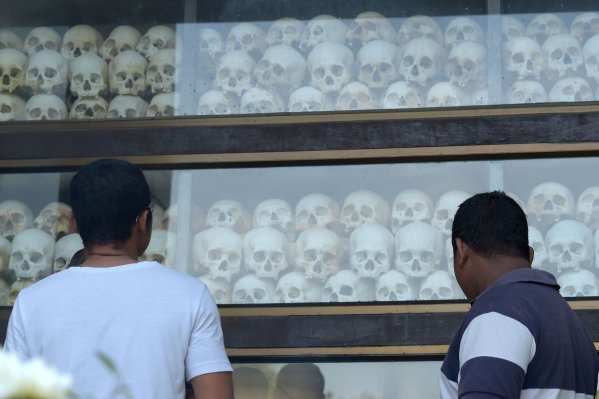 How Cambodia’s Day of Remembrance for Genocide Victims Has Always Been Complicated by Politics
Next Up: Editor's Pick