The ultimate question in Game of Thrones has always been the same: who, at the end of eight seasons of political machinations, brutal deaths and careful plotting, would sit on the Iron Throne that is the symbol of unified power in the Seven Kingdoms of Westeros?

Those betting online on this final outcome had plenty of thoughts on the matter. But when it comes to paying out following the show’s finale episode, things got a little complicated. As we now know after that last Game of Thrones episode, the dragon Drogon melted down the Iron Throne itself in a bout of intense, fiery grief after the death of Daenerys Targaryen at the hands of Jon Snow.

Over at Ladbrokes, a U.K.-based online betting site, the language of the bet itself ended up being extremely important. They were taking bets on who would “sit on the Iron Throne,” and they had the option of “the Iron Throne to be vacant” at 7/1 odds — which is, technically, the correct answer. So they ended up paying out those who backed that outcome alone, and returned stakes on any other bets placed. Those who had the foresight to believe that Bran Stark would become ruler of Westeros — and he was sitting with a fairly low 20/1 odds as of last week — had their money returned and did not get paid out on their mostly-correct gamble.

At Paddy Power, another British betting site, there was a slightly different circumstance because of how the bets were phrased. They asked players to predict who would “rule Westeros at the end of the season.”

“Essentially, the throne being destroyed is relatively irrelevant to us in terms of paying out on the market,” a representative explained to TIME. Bran, as it turns out, was not only show’s final king — but also one of their popular frontrunners for that fate since they opened betting in the last year. As of last week, his odds were at 5/4 to rule at the end. As Paddy Power explained, Bran being named ruler was actually a profitable result for the bookies, since he wasn’t a “big-priced outsider.”

And even though the show has now concluded, Paddy Power at least isn’t done with Westeros. Thanks to the strong fan reactions to the season, they note that they have 12/1 odds going that the writers “change their minds” and even add an extra season, or 4/1 odds that there is a spin-off season.(Arya Stark’s adventures west of Westeros, perhaps? Or Jon Snow’s experiences back in the Night’s Watch up north?)

Until that comes to pass, winners and losers alike will just have to be satisfied with the show’s final twists. The Game was never meant to be easy to predict. 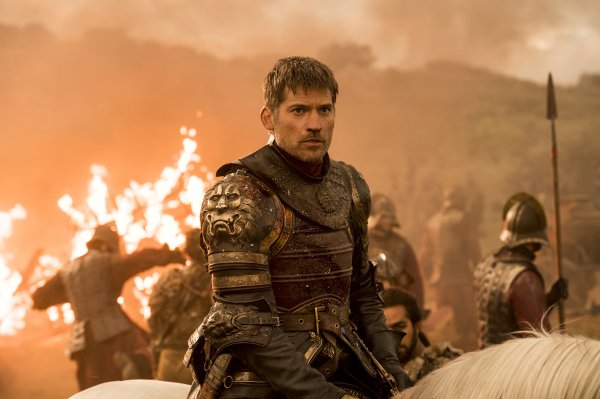 Move Over Coffee Cup. Fans Think Jaime Lannister Grows His Right Hand Back in This Game of Thrones Photo
Next Up: Editor's Pick