The First TV Show Is Leaving Georgia Over the New Abortion Law. The Local Film Industry Fears What Comes Next

This week, the director Reed Morano was supposed to fly to Georgia to scout locations for a new show for Amazon Studios called The Power. The drama series is adapted from a novel by Naomi Alderman, in which young women suddenly develop the power to release electrical jolts from their fingers, shifting gender and power dynamics around the world. At least two scouts hired by the show had been working in the Savannah area for several months, prepping for her arrival.

But when Ga. Gov. Brian Kemp signed the “heartbeat” bill on May 7, which effectively bans abortion after six weeks, Morano decided to cancel the trip, pull the scouts, and shut down any possibility of filming a story arc in Georgia. “We had no problem stopping the entire process instantly,” Morano, who won an Emmy for directing three episodes of Hulu’s The Handmaid’s Tale, told TIME. “There is no way we would ever bring our money to that state by shooting there.”

Morano is one of the first directors to publicly pull a project out of Georgia after the state passed a law that critics say will make almost all abortions illegal. A representative for Kristen Wiig also confirmed that her upcoming Lionsgate comedy Barb and Star Go to Vista Del Mar, which she co-wrote and will star in alongside Annie Mumolo, was also pulled out of the state following the bill’s signing.

These decisions arrive as a growing number of prominent Hollywood figures like Alyssa Milano and David Simon advocate for a boycott to try to force the hand of a state that is home to a thriving film industry. That industry employs 92,000 people and generated $9.5 billion in total economic impact in 2018. “I think this is one of the ways where we know we can hit a state where it hurts,” Morano says.

But as Hollywood tries to wield its power to enact change, members of the film and television community in Georgia have become fearful that their livelihoods will be threatened over a policy that many of them do not support. Several film insiders in the state say that the effects of the boycott are already being felt, with producers shifting gears and searching elsewhere for filming locations. “I’m lost,” Tom Jordan, a cameraman, says. “I’ve been thinking about going out of state.”

For his part, Kemp has dismissed the calls for a boycott, telling a state Republican convention this week, according to the Atlanta Journal-Constitution, “We are the party of freedom and opportunity. We value and protect innocent life — even though that makes C-list celebrities squawk.” Kemp’s office did not respond to a request for comment.

As other tough abortion restrictions make their way through the legislatures of many other states, film workers expect those states with rising film communities, like Alabama, Louisiana and South Carolina, to be similarly impacted. The growing tension between Hollywood and right-wing policymakers threatens to undermine the vast recent changes in a film and television industry that was just beginning to spread beyond the coasts and into the heart of America.

Once upon a time, California had a vice grip on the film industry. That is no longer the case: according to a 2018 study released by FilmL.A., only 10 of the top 100 highest-grossing domestic films released in 2017 were primarily made in California—half the number it had just three years prior. The state that has decisively taken the lead in that metric is Georgia, which had 15 top-grossing films; in 2018, the state hosted 455 film and TV productions, generating $4.6 billion in total wages.

Georgia’s rise as a production powerhouse can be attributed to a generous entertainment tax incentive signed in 2008, when its economy was floundering during the recession. Lawmakers offered up to a 30% tax credit to filmmakers, prompting an influx of productions that has only accelerated over the last decade alongside the dramatic increase in shows across cable and streaming platforms. Over that time, Georgia has handed out more than $1 billion in tax credits to massive projects like Stranger Things, The Hunger Games and many movies in the Marvel Cinematic Universe including Black Panther and Avengers: Infinity War. An extensive infrastructure has been built, with enormous film studios like Pinewood Studios and EUE/Screen Gems dotting Atlanta’s landscape. The entire town of Senoia was revitalized solely thanks to the zombie influx brought by The Walking Dead.

And the boom has impacted not only actors, directors and crew members, but also many industries peripheral to moviemaking. “We saw whole sectors saved—from florists to caterers to carpenters to electricians,” Chris Escobar, the executive director of the Atlanta Film Society, told TIME. “No matter what side of the political spectrum you’re on, the film industry is the one thing everyone is on the same page about.”

During the governor’s race last year, both Kemp and Democrat Stacey Abrams stressed the importance of the state’s film industry and keeping the tax incentive intact. But when Kemp squeezed out a victory, the film community was put on edge: They had seen how hardline right-wing policies had threatened Georgia’s film industry before, like in 2016, when Disney and Netflix threatened to pull out of the state after the passage of an anti-LGBTQ bill. (Gov. Nathan Deal vetoed the bill.)

As the heartbeat bill made its way through the Georgia legislature earlier this year, many prominent Hollywood voices railed against it. In March, Milano—who is currently shooting the Netflix show Insatiable in Georgia—wrote an open letter pledging to boycott Georgia if the bill became law; her letter was signed by Amy Schumer, Don Cheadle, Laverne Cox and other Hollywood stars. After Governor Kemp signed the bill, several filmmakers, including David Simon, Christine Vachon, Ron Howard and Mark Duplass, vowed to boycott filming in the state.

But the pledges received backlash from Georgians. A petition protesting the boycott from a group called the Women of Film in Georgia currently has over 1,800 signatures on change.org. “A boycott would punish the wrong people,” Democratic state Sen. Jen Jordan, whose speech against the heartbeat bill recently went viral, says; she cited a recent poll that said more Georgians oppose the new abortion law than support it. “If [film workers] stay here and help elect people that really reflect the values of everyone in the state, that’s when you’re going to see real change.”

Several Georgia film workers say they’re already feeling the sting of Hollywood pulling back from Georgia. Kathy Berry was one of the scouts on The Power; she had just bought a house in Savannah and was settling down for what she thought would be a five-season run when she was told she had been let go. (She was unable to explicitly state which show it was due to a nondisclosure agreement, but TIME independently confirmed that it was The Power.) “We’re in panic mode,” Berry says. “The sky is falling.” She says that she heard that at least two other productions in Savannah alone decided to postpone filming last week due to the bill.

Tom Jordan is a veteran cameraman who worked on films like Saving Private Ryan and two of the Oceans movies. He moved to Georgia in 2012 to “chase the film industry,” he tells TIME. He says that since Gov. Kemp was elected, Georgia production slates have started drying up. “We used to film here in the summertime like crazy,” Jordan says. “Now there’s this void. It feels like with this abortion law, they’re going to wait and see what happens.”

Molly Coffee, a production designer, has worked in the Georgia film industry for the last decade. “Over the last month, I’ve had two interviews that basically disappeared as they explore other options in other states,” she says. “It’s very implied that everyone does not trust what’s happening in Georgia.”

Morano says that potentially harming Georgian film workers was “the hardest part” of pulling The Power from the state. She filmed in Georgia in 2016 with the AMC series Halt and Catch Fire alongside what she calls an “excellent group of people on the ground that deserve to work.” But she stands by her decision: “I’m sorry if the work moves away from where you live. But having this basic fundamental right for women is more important than anything in this moment in time.”

The battle will not be confined to just Georgia. Crew workers in the film industry tend to be mobile, thanks to the shifting tax laws of southeastern states. Incentives have boosted flourishing scenes in Louisiana, Alabama, and South Carolina: 2018 was a record year for film in Alabama, for example, with 147 production projects generating $63.5 million in expenditures across the state.

Many of those states have their own abortion bills moving through their legislatures. In Alabama, a bill that would ban most abortions in the state has been signed by Gov. Kay Ivey; in Louisiana, a similar bill has passed the state Senate and will move to the House. If Hollywood studios also decide to boycott making TV shows and movies in those states, Berry is fearful that each state’s film industry will go the same way as North Carolina’s, where she worked on Homeland for several years before its industry crumbled.

That state boasted a burgeoning industry in the early 2010s, but was hit with two blows: First, the state’s film tax incentive was repealed in 2014; then, two years later, the HB2 bill—which directed transgender people to use the public bathrooms that matched the sex assigned to them at birth—was signed into law, causing productions to flee en masse in protest. “It gave them the ultimate eject button,” she says of the anti-LGBTQ law. Whereas 35 major productions were shot in North Carolina in 2013, just 12 were filmed there four years later, according to the North Carolina Film Office; Berry says the communities of film crews who used to live in Wilmington and Charlotte have “evaporated.”

It’s possible that the bulk of the film industry will remain in Georgia regardless. Netflix is in the process of shooting several shows in Georgia, from Insatiable to a new season of Ozark; a representative declined to comment for this story. (Ozark’s star Jason Bateman, however, says he will no longer work in Georgia if the bill survives court challenges.) Disney, which has had a massive presence in the state due to its Marvel films, did not respond to a request for comment. The Motion Picture Association of America released a statement acknowledging the complexity of the situation and did not commit either way: “Film and television production in Georgia supports more than 92,000 jobs and brings significant economic benefits to communities and families,” a spokesman says. “The outcome in Georgia will also be determined through the legal process. We will continue to monitor developments.”

Other production companies have chosen to remain, but also to invest their resources toward fighting the bill. Ron Howard is shooting Hillbilly Elegy there next month, but said he will boycott the state in the future if the bill goes into effect and make a donation to the ACLU in the meantime. Jordan Peele’s Monkeypaw Productions and J.J. Abrams’ Bad Robot promised to donate all of their episodic fees for their upcoming show Lovecraft Country to Fair Fight Georgia and the ACLU of Georgia—which are planning to challenge the bill in court. “In a few weeks we start shooting our new show, ‘Lovecraft Country’ and will do so standing shoulder to shoulder with the women of Georgia,” their statement reads.

Morano hopes that the boycott will have an immediate effect so as not to endanger the livelihoods of those on the ground. “The best thing we can hope for is if everyone has a united stance and pulls the money out,” she says. “Maybe we can have a quick reversal to these laws and then everyone gets what they want.” 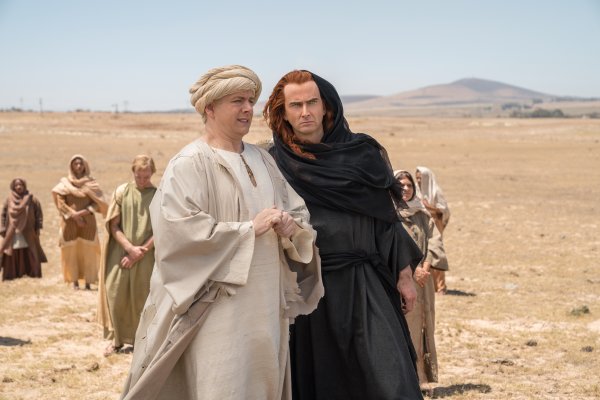 Amazon's Good Omens Is an Exhausting Maximalist Spectacle
Next Up: Editor's Pick